Stimulus Checks Appear to Give Restaurants a Boost

To some extent, the worst is behind us.

In the week ending April 12, year-over-year same-store sales growth improved for restaurants for the second consecutive stretch, according to Black Box Intelligence. Comp sales and traffic both dropped 59 percent. While that number is alarming, it’s also the first time in the last four weeks the industry has posted results sub negative 60 percent.

There are a few factors in the works, depending on the market, brands, and a bevy of other considerations. Some measurable. Some not. It’s also worth considering how more recent data measures a different landscape. Many restaurants closed when they couldn’t pivot, or realized it was simply more cost effective to temporarily shutter until restrictions lift.

Chipotle CEO Brian Niccol, whose chain witnessed sales track in the negative high-teens range last week, credited fatigue in home cooking, as well as people running out of stocked-up food stores. Also, he noted the arrival of stimulus checks and tax refunds for many Americans and their decision to use that money to break up the monotony of quarantine life.

This does align with historic past trends, as restaurants have long provided a cost-effective experience option during difficult times. It’s a way people can treat themselves without breaking the bank.

By April 21, Sense360 survey data found that 48 percent of respondents had received their stimulus checks. Thirty percent said they expect to get one, but hadn’t yet. Eleven percent didn’t think one was coming. Twelve percent were unsure.

So that suggests restaurants could enjoy a second wave of this bump in the coming week or weeks. It’s hard to pin down the exact timing. 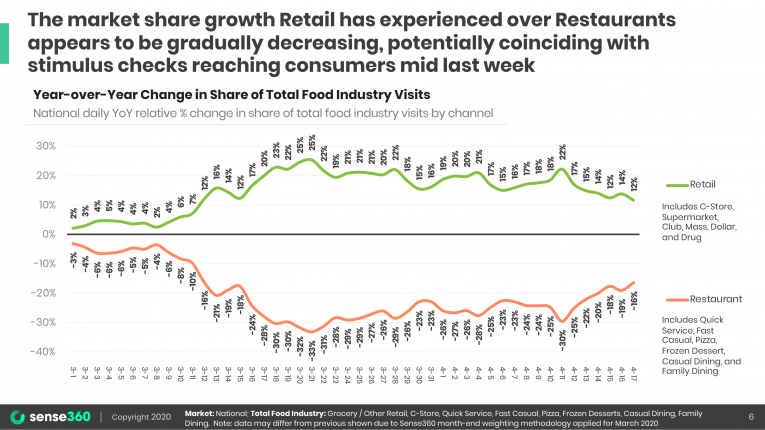 While most of the respondents said they would use stimulus money on essentials, one out of 20 people said they’d deploy the check for “non-essential shopping.” It’s not a huge figure but it’s better than zero, which is where many customers were only a couple of weeks ago.

In this below graph, you’ll see where the money might go. Grocery purchases still outrank restaurants. Yet a 9 percent jump off the bottom is worth latching onto. 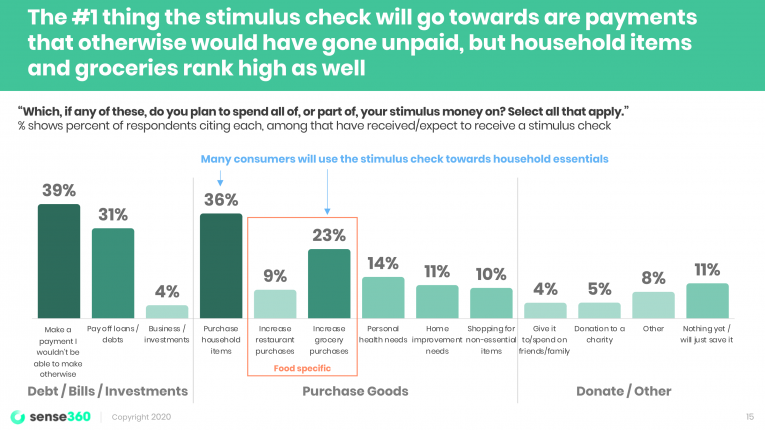 Black Box said Thursday some COVID-19 patterns are holding tight. Average spending per guest continues to gap between quick-service and limited-service concepts. While year-over-year growth in average guest check has grown at a pace of 10 percent or more over the last two weeks for limited-service brands, sit-down chains have experienced continual declines. The reason hasn’t changed. More quick-serves are adding family bundles and bulk options, and people are ordering more per visit to make the experience last. There has also been a plunge in single-visit purchases, thanks mainly to the removal of commuter orders from the occasion set. Simply, the number of people getting food on their way to work, or coffee, or grabbing lunch alone during their break, has dropped significantly as COVID-19 demolished routines.

For full service, it’s the lack of attachment items, especially beverages, moving the needle in the opposite direction.

Black Box said all industry segments, except for fast casual, experienced an improvement in their year-over-year comp sales last week compared to the previous period. Fast casual reported a slight 1.1-percentage point decline. This is probably more an outlier tied to the effect of Easter than anything else.

Family dining and fine dining continue to struggle more than others, Black Box said. Pizza, chicken, and hamburgers performed the best—all with comp sales north of negative 30 percent during the week. Out of the 11 regions of the country, though, only California did not improve its year-over-year comp sales.

Below is a look at how different categories are tracking per Sense360’s foot traffic metrics. Pizza and quick service in general are emerging from the pack. 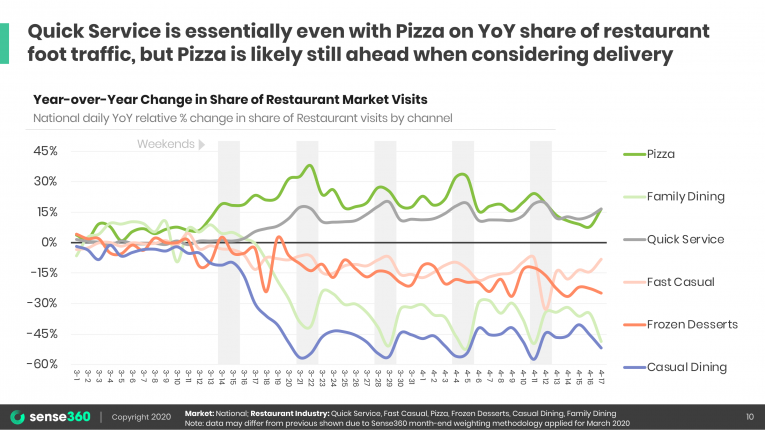 Here’s another way to look at it, with similar results. 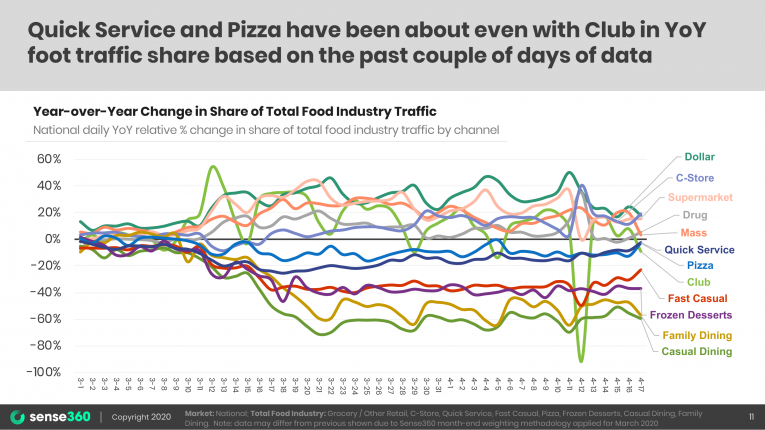 As continues to be the case, restaurants built for off-premises before COVID-19 are handling the shift better. They benefit not only from systems already setup to meet the demand, but also a customer base that trusts and understands the experience. There’s no pivot leap of faith.

More on the pizza topic here, and how Domino’s could grow out of the pandemic.

Black Box discovered that share of food spend remained at 78 percent for grocery stores during the first two weeks of April. That represents an increase of 3 percentage points from grocers’ take back in March.

As the industry moved to off-preemies-only in response to COVID-19, the number of unique guests ordering meals through third-party delivery grew by about 60 percent for quick-service restaurants. Growth in unique users for full service doubled, year-over-year.

Sense360 asked its respondents how this might carry forward into the future. Here’s a look at what they found. 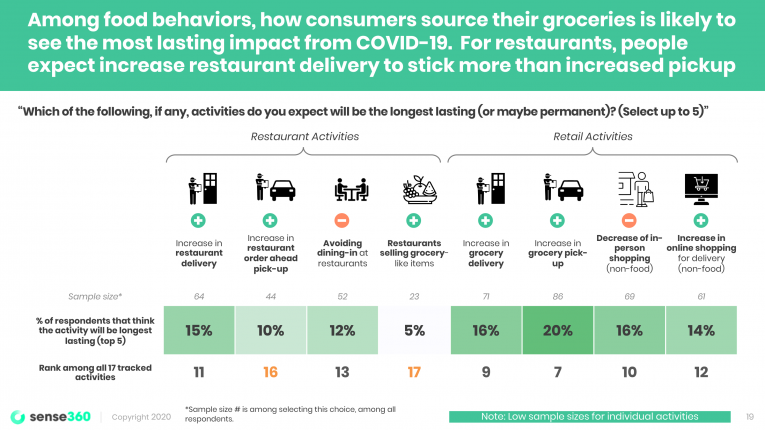 Essentially, delivery and order-ahead service appears likely to hold favor post COVID-19. At the outset of reopenings, it will represent a key bridge for restaurants to offer still-wary consumers a way back.

Black Box said there have been diverging trends in guest sentiment toward restaurant off-premises offerings among limited-service and full-service restaurants.

The first, which typically enjoy a significant mix of sales through those channels, initially saw improvement in guest sentiment related to to-go and delivery, Black Box said. However, most of those initial gains eroded in recent weeks and guest sentiment shifted back to being relatively low.

You could say customers were first thankful for the added options. But it’s now been long enough where they’re separating quality from availability. It’s not so different from pre-COVID-19 times as it pertains to brand-by-brand sentiment. Customers are now judging restaurants by their off-premises offerings. The cream is rising to the top.

It helps, in this case, many of the consumers are new to the avenue and measuring their experiences against not having the option previously. So there’s a novelty effect in the works. Still, many sit-down concepts have brought real innovation to the table, from makeshift drive thrus to bundle meals that include the works. Alcohol as well.