What the Future Really Holds for Starbucks

How will the coffee giant reignite U.S. sales? Starbucks outlined its plans for 2018 and beyond.
Finance | March 2018 | Danny Klein

Much has been said about Starbucks’ slowing U.S. business in recent months. The company’s same-store sales increased 2 percent in the first quarter, which underwhelmed investors and even led one analyst to downgrade the coffee chain’s stock, as well as trim its price target to $64 from $67.

For the first time since that 1Q report, Starbucks executives shared the brand’s strategy to revitalize these comps and offer perspective into what the company has accomplished during a transformational five-year period. Scott Maw, Starbucks’ chief financial officer, delivered a presentation to more than 200 analysts and investors as part of the UBS Global Consumer and Retail Conference. Maw highlighted the company’s six operational priorities for long-term growth, and also spoke about Starbucks’ efforts to stabilize and ignite U.S. sales. Needless to say, some major changes are coming.

Here were some of the highlights.

To start, Starbucks’ sheer size and infiltration into the marketplace has clouded its growth a bit. Customers understand it’s an accessible part of their lives, in nearly every market across America. And perhaps that’s muddied the story. A snapshot: in the past five years, Starbucks’ store count has increased from 18,066 to 27,339. It has gone from serving 61 million customers per week to 91 million. Revenue is up to $22 billion from $13 billion and the company’s market cap has ballooned from $39 billion to $78 billion.

In explaining this growth story, Maw said Starbucks adjusted its operational procedures to not just meeting the rising customer base, but also to evolve with the industry on multiple fronts. He shared Starbucks’ six operational priorities:

Let’s focus on No. 1. About a year ago, Starbucks recorded a significant slowdown in traffic at peak.

“It actually turned negative in our busiest stores that had a lot of MOP [mobile order and pay] transactions. And so, what we did is we focused on training on specific roles, on really getting the partners that were in the stores pointed at where the biggest activity was and where the biggest bottlenecks were,” Maw said.

This bottleneck issue has been a critical one for Starbucks. Maw said the brand has used LEAN principles (this typically means creating more value for customers with fewer resources), and, within three months, began to see comps turn.

“And they went from negative to flat to positive over a relatively short period of time. And actually for the last three quarters, those busiest stores that had the biggest challenges a year ago have actually grown comps faster than the average, and again that's that focus around operational excellence,” Maw said.

Maw added that Starbucks saw its peak hold strong in the past quarter, despite the lower-than-expected comps. More so, for the first time in five years, Starbucks launched an update nationally to what it calls labor deployment known as Deployment 2.0. “But it's really how we position our partners at different dayparts within the store to drive throughput and service our customers,” he said.

The old system, launched five years ago, was based on average product mix, food, beverage, and an average daypart mix.

Back then, Starbucks’ food was 15–16 percent of total sales. Now, it’s over 20 percent, Maw said. In some units it’s even gone from 15 to 30 percent over that five-year period. Cold beverages as a percent of total beverages was in the mid-30s five years ago. It’s above 50 percent currently. And again, Maw said, some Starbucks have seen the mix double.

“And yet we were running the same plays and the same deployment based upon average from five years ago,” he said.

So the new deployment, the 2.0 iteration, is organized daypart-by-daypart, store-by-store, mix-by-mix, Maw explained. The goal: having employees in the right places at the right time. 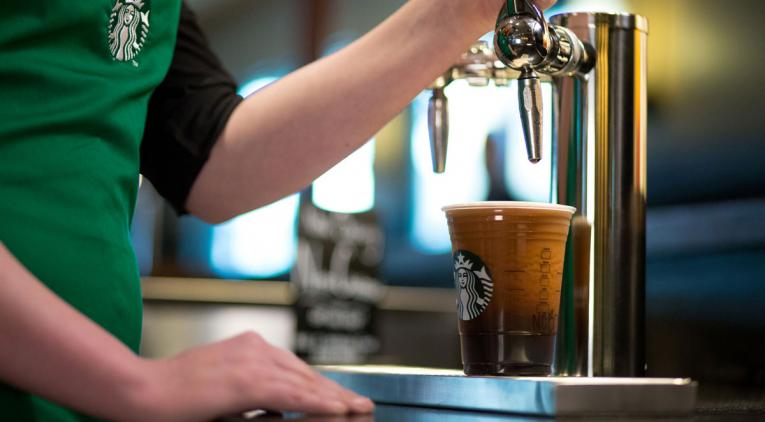