The java chain is starting to cash in on long-term efforts.
Finance | July 2019 | Danny Klein

Starbucks' results were its best in two years.

We’re just over a year removed from Starbucks chief executive Kevin Johnson calling the java chain’s recent performance unacceptable. He told investors Starbucks’ sales did “not reflect the potential of our exceptional brand.” This ahead of a fiscal 2018 third quarter where the company would post its lowest global comparable same-store sales growth since it began sharing figures on its investor site in 2011.

That’s worth keeping in perspective for Thursday’s Wall Street-busting results. Starbucks soared to record highs on the stock market following its best report in more than two years. The chain was trading up 6 percent to $96.68 in premarket movement Friday following adjusted earnings of 78 cents in Q3 2019, which crushed expectations of 72 cents. Revenue moved to $6.8 billion from $6.3 billion in the prior-year period.

But most notable was the top line, where same-store sales jumped 7 percent in the U.S. anchored by 3 percent traffic growth. Analysts predicted just 4.4 percent gains. Starbucks’ comps also rose 6 percent in China, year-over-year, writing a global picture of 6 percent across its system, led by a 3 percent hike in average ticket and a 3 percent bump in transactions. Starbucks last hit 6 percent growth in Q2 2016.

It’s easy to take these figures and chalk them up to an easy lap of soft results—Starbucks U.S. comps lifted just 1 percent in Q3 2018. But the reality is different, and it speaks to this breakthrough more as an inflection point than a flash in the earnings trail.

When you consider the results, Starbucks’ two-year sales comp was 8 percent, its highest stack in eight quarters and a sequential improvement over the 6 percent two-year figure in Q2. Looking at that step-up sequentially, it demonstrates that Q3’s performance didn’t just result from a friendly lap. “It provided clear evidence that the actions we’re taking to improve the business are delivering results,” CFO Patrick Grismer said during Thursday afternoon’s conference call.

Those actions have unfolded over three, company-defining changes: beverage innovation, an improved in-store experience, and digital relationships. It’s why Starbucks lifted its full-year guidance to now call for global same-store sales growth of 4 percent (up from 3–4 percent), with at least 1 percent stemming from traffic growth, which has been flat on a two-year basis in the U.S. That’s an improving trend, too, as the company’s transaction comps tracked negative across nearly all of fiscal 2018.

Diving deeper into these strategies, Starbucks moved the needle by boldly rethinking its customer and how it handles day-to-day delivery and back-end execution. The changes were not subtle.

Johnson took the story back five years to talk about investments that currently enable Starbucks to record more than a billion digital customer occasions per year.

Revamping its industry-leading rewards platform in April was met with some flak from loyal guests. The new, tiered structure encouraged sign-ups by offering rewards faster, but some people were dismayed by the shift in redemption structure. Instead of exchanging a flat 125 stars for a free food or drink item, for instance, Starbucks now apportioned free items at different levels of stars. 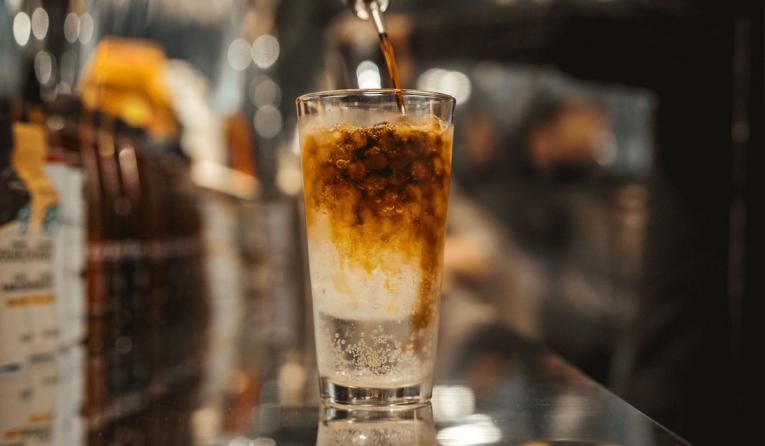 Beverage innovation is driving the bulk of sales for Starbucks.

“As a leadership team, we do not take victory laps after a great quarter like Q3. But rather, we focus on staying true to our mission and values, taking care of our partners, serving our customers and delivering results." — Starbucks CEO Kevin Johnson.

Making these changes wasn’t easy considering Starbucks' history and equity in the platform. It wasn’t exactly broken. But the brand didn’t let short-term fear cloud what was a necessary evolution to inspire repeat visits and bring new customers onboard amid a growing competitive set. Rewards is a crowded game these days.

And all those predicted benefits are starting to flood in, especially in regards to adding new customers. Starbucks 90-day active members base accelerated 14 percent, year-over-year, in the quarter, hitting 17.2 million active members. Loyalty members accounted for 42 percent of U.S. tender in the period. Johnson said Starbucks is seeing improved engagement from the group. The growth of the platform, adoption of mobile order and pay, and Starbucks’ personalized marketing efforts contributed nearly 2 percent of comp sales growth in the U.S. for the quarter—an improvement from recent periods.

COO Roz Brewer said there are three components to understand why the program is thriving. Firstly, there’s power in the notion of “redemption for all." This allows Starbucks to give new members stars within two to three visits. In the past, it was 30–40 trips, which is a massive change and key to helping digitally registered customers take the next step to rewards. How many guests in the past kept that frequency up to start benefitting? How many bailed a few visits in or simply forgot to use the rewards option?

The second piece is multi-tier redemption. Before, members could only redeem once they hit 125 stars. Now, they’re able to cash in their stars across five tiers, ranging from 25 to 400 stars. And Starbucks added new items, including merchandise and at-home coffee, for customers to score. The last part is a no expiration feature for Starbucks credit card holders. Stars last indefinitely for them.

Brewer said, unlike previous changes, employees felt “100 percent ready” to open restaurants with this new platform. There was zero interruption. “The program is a success,” she said. “We’re seeing conversions from our [non-Starbucks Rewards members]. In addition, I’ll add to that, we’re able to speak to our non-SR members. And that’s our occasional member … joining us in the afternoon likely through drive thru, enjoying refreshment and cold beverages.”

“And so it’s growing our category where we needed it the most and improving our afternoon daypart as well,” she added.

Let’s touch on that last note. Starbucks’ afternoon business has been climbing in recent quarters. Johnson said the segment saw comps growth in Q3 for the first time in three years. The catalyst was Starbucks’ cold beverage platform. Nitro Cold Brew, in particular, hit 5,800 stores by quarter’s end and is expected to roll out to all company units by the end of fiscal 2019 (80 percent by early August). Of the 3 percent growth in average ticket in the quarter, 2 percent was driven by beverage attach and beverage mix, while pricing lifted the remaining 1 percent. Beverage growth contributed about 80 percent of Starbucks’ total sales growth in Q3. Starbucks had to make advancements in its back rooms and behind the bar to accommodate for Nitro, adding new equipment. 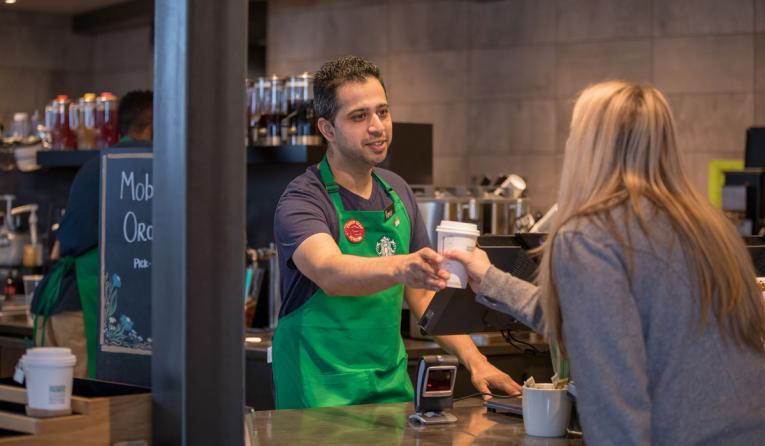 Starbucks has removed 12 hours of tasks in-store and diverted that time to customer-facing activities.

Returning to rewards, Brewer addressed the short-term concern in regards to those core users. She said they’re starting to actually increase frequency due as much to beverage innovation as some of the digital changes. Concerning new non-SR customers, Starbucks is still in data gathering model. The brand is doing some customer segmentation, Brewer said, which is allowing Starbucks to look at time of visits. And, accordingly, adjust its scheduled labor hours in stores.

The brand recently installed a labor scheduling tool that’s aiding the effort. “… as we get these new customers, we’re learning more about them,” Brewer said. “And it is moving our business in the afternoon daypart. And actually, we’re learning their preference for cold beverage and the Refreshers business—iced teas that we’ve just recently introduced in the past 60 days.”

The labor tool part is part of that “improved in-store experience” element. Over the last few quarters, Starbucks looked carefully at the tasks weighing down employees, and asking what it could automate to improve customer-facing service.

The brand took out roughly 12 hours of work at the store level, Brewer said. And this is just beginning.

Moving forward, Starbucks will introduce “inventory excellence and routines, which is going to help us with further store execution,” Brewer said. It then plans to make “significant improvements” to its food processes. Lastly, Starbucks’ automated centralized planning and replenishment will land in the second quarter of next year.

Starbucks opened 442 net new stores in the third quarter, with about a third of the new stores in China. It has about 30,000 worldwide units.

Updating Starbucks’ recent delivery announcement, Johnson said the service, in partnership with Uber Eats, is now live in more than 2,700 locations across 11 markets. The brand is seeing higher ticket compared to in-store transactions as well as sales incrementality, he said.

“Our most important work that we could do during this time frame was to make sure that we had very good software integration, first and foremost,” Brewer said. “And second, that we execute at store level. And those two areas have given us encouragement to go national with the program. What you'll see coming forward is not only the relationship coming together between Uber and Starbucks but also to the additional marketing that we're adding toward the efforts.”

The platform is expected to roll out nationwide by early 2020.

“As a leadership team, we do not take victory laps after a great quarter like Q3. But rather, we focus on staying true to our mission and values, taking care of our partners, serving our customers and delivering results. This is what it takes to build an enduring company, and this is what you can expect from Starbucks,” Johnson said.