Wingstop celebrated its 25th anniversary with a bang. The chain’s stellar run continued during the second quarter of fiscal 2019, with same-store sales climbing into the double-digits.

The brand’s domestic comps skyrocketed 12.8 percent, year-over-year, building off 2018’s Q2 figure of 4.3 percent. Sticking to its long-term strategy for growth, 1,303-unit Wingstop (1,139 in the U.S.) continued making investments that expanded brand awareness and innovation across the system. In order “to continue to best-in-class experience” to guests, CEO and president Charlie Morrison said, the company is incorporating and testing more technology like kiosks, pick-up lockers, and back-of-house enhancements, in stores.

Where does Wingstop rank in this year's QSR 50 by total sales, AUV, unit count, and more?

“We believe that technology is the right area for us to continue to invest as well as innovate,” he said. “As we look forward to the Wingstop of the future, we believe technologies currently in test will play a key role.” 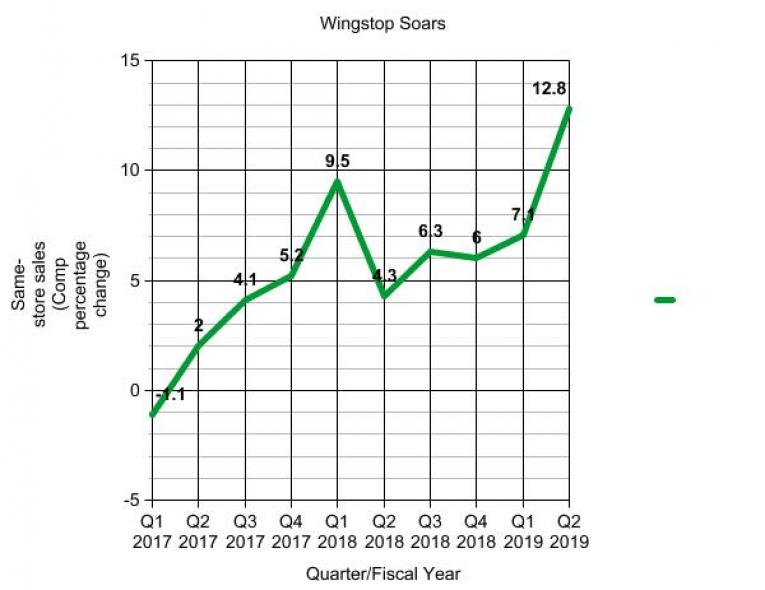 Wingstop's same-store sales have climbed a long way in the past two years.

Wingstop modified three restaurants in the Dallas-Fort Worth market to try and find the most effective upgrades. The testing will allow the brand to lay out a sequence and process of which parts it will invest in, and in what order. The improvements aren’t limited to company stores, of which there are only 29. Wingstop is consulting with its franchise advisory council to evaluate what updates would yield the highest returns for franchisees and the brand.

“At the end of the day, it'll all be about making sure that we generate a great return on investment so that we maintain the best-in-class unit economics we have,” Morrison said.

The company is being methodical with piloting every new component. It’s too soon to reveal what technology would have the greatest effect on transaction times and would be rolled out systemwide, but Morrison isn’t ruling anything out just yet.

“We have not yet gained enough insight to suggest that we would change the complexion of the restaurant from our standard 1,700-square-foot, limited seat, heavy carryout, delivery-oriented restaurant,” Morrison said. “However, certainly it can improve throughput, which can make existing restaurants that much more productive and have capacity for additional growth … We haven't really even hit the top end yet on all our restaurants.”

At the end of Q2, Wingstop had 135 international locations. Morrison said the company is adjusting operations to accommodate different needs in various markets, but some of those processes could eventually make it to U.S. stores.

High traffic locations, like shopping malls in the U.K., have been able to accelerate orders churning out an order in five to seven minutes instead of 12-15 minutes. This change in speed is improving the brand’s image, bringing up guest satisfaction scores, and improving guest experience, Morrison said.

The company is ahead of its development goal and, as a result, its growth outlook for 2019 was adjusted from 136 to 142 net new restaurants, Wingstop’s chief financial officer Michael Skipworth said.

“I'm very pleased with the strength of our pipeline of new restaurant development,” Morrison said. “This rate of unit growth is consistent with our long-term target of 10 percent-plus unit growth.”

Wingstop execs have a vision to grow the brand six times the size it is today, Morrison said.

Over the past two quarters, Wingstop’s investments—digitizing every transaction and simplifying our guest experience with technology and kitchen enhancements—are resulting in higher average-unit volumes and driving franchisees to join the brand.

Wingstop’s fortressing strategy is also pushing franchisees, both existing and new, to invest in certain markets. The company is focusing on development in 25 markets and about 80 percent of the company’s development pipeline are in those specific markets. 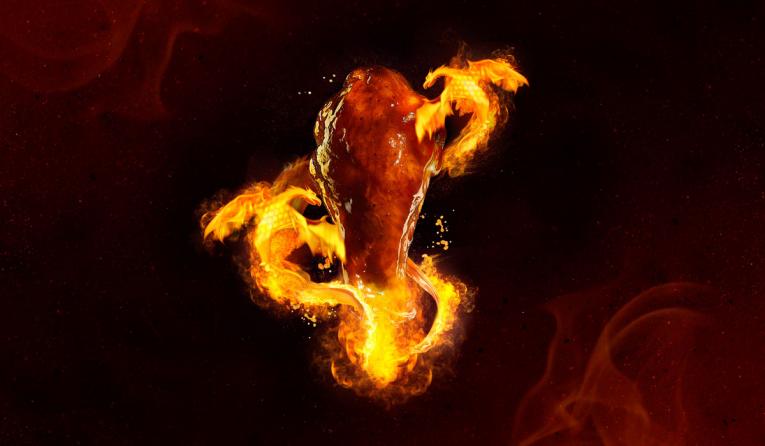 Wingstop made the announcement in June that it would be building new corporate headquarters in Dallas. The new 78,000 square-foot building comes with a $18.3 million price tag, but Morrison said that investment is worth it. The headquarters will house a global test kitchen, innovation center, and a mock Wingstop restaurant for training.

“As our team grows, we must ensure we have an environment that supports our next phase of growth and attracts top talent,” Morrison said. “While just down the road from our corporate headquarters here in Dallas, we are excited to have a space that represents the growth and pride we have in the Wingstop brand.”

Testing new products or training in a company-owned stores isn’t always practical. The new mock restaurant and test kitchen will allow for a better environment and will hopefully yield better results that can be implemented systemwide.

By investing in the new headquarters now, the brand is setting itself up for sustained success down the road, Morrison said.

Doubling down on delivery

Wingstop’s delivery capabilities continue to steadily grow. The wing chain is on track to hit its goal of having 80 percent of its system delivery capable by the end of 2019. That number now rests around 60 percent, up from 50 percent last quarter. Delivery remains a key drive of top line growth at Wingstop. Morrison said locations where delivery has rolled out are showing similar results to test markets with the delivery making up high single- to low double-digit of the sales mix.

An aggressive advertising strategy with third-party delivery partner, DoorDash, pushed more customers to use that platform than directly from Wingstop’s own website. During a test, the breakdown resulted in 65 percent of orders from Wingstop.com and 35 percent from DoorDash. After DoorDash rolled out its own advertising, that mix flipped.

This led to the wing chain having to pay high commission rates to the delivery company, a problem it hadn’t encountered before. Wingstop worked with DoorDash to rebuild its pricing and commission structure, which resulted in a more favorable commission for Wingstop, Morrison said.

“We do pay an overall lower commission for Wingstop.com orders because we absorb a lot more of the specific cost of the transaction,” Morrison said. “We had a very productive engagement with DoorDash to try and eliminate that gap in margin, or commission if you will, by way of a price change that we anticipate taking on our marketplace orders only. The Wingstop.com orders will still have the same pricing structure as our core restaurants. But we felt that was important in addition to a modification of the commission structure based on our performance to date.”

Wingstop doesn’t plan on providing any incentives to drive people to the channel. Instead, the brand believes the differentiated pricing on the marketplace and its own site will be enough to get customers to order through Wingstop.com.

“We don't believe we need to incorporate a coupon or any other sort of incentive at this point, and would rather rely on our national advertising strength going into 2020 as a means to drive that mix the other direction,” Morrison said.