Pizza Hut's long-term plan will have some bumps along the way.

Pizza Hut is showing the toll of its transition to a modern delivery asset base. And it’s likely to continue throughout 2020, Yum! Brands chief operating officer David Gibbs cautioned Wednesday.

The chain closed 98 U.S. locations and opened 39 in the third quarter of fiscal 2019, finishing the period with 7,390 domestic stores versus 7,449 at the start. Stateside same-store sales dropped 3 percent and system sales declined 2 percent. There are 18,532 total global units.

Pizza Hut’s choppy results didn’t catch Yum! offguard. It expected to introduce uncertainty into its performance short-term so it could remedy a broader issue. The widening gap between Pizza Hut’s dine-in and off-premises business wasn’t slowing—and the brand’s legacy footprint wasn’t reflective of recent investments. Or where customer data suggested transactions were headed.

About 90 percent of Pizza Hut’s business is either takeout or delivery. Yet it closed Q2 with 6,100 traditional units and 1,350 express locations. Roughly half of the first set were dine-in venues. And Pizza Hut’s domestic stores report about a seven-point differential between off-premises and dine-in. Additionally, nearly nine out of every 10 new builds are designed as “Delco” models focused on off-premises—smaller, more efficient concepts that require lower investment from franchisees, of which Yum!’s split hit 98 percent in 2018.

Gibbs said the system sales gap between Pizza Hut’s dine-in channel and off-premises sales in Q3 narrowed from “historical levels” to three points, reducing the drag on the company’s performance. But it wasn’t a painless process.

Gibbs noted last quarter Pizza Hut would likely drop to as low as 7,000 locations in the U.S. during this footprint facelift. The goal being to replace as many units as possible, but understanding the challenge wasn’t so clear-cut.

READ MORE: Where does Pizza Hut rank in the nation's top pizza chains?

One of the big disruptors currently is Pizza Hut’s restructuring of its franchise base. CEO Greg Creed, who is retiring at year’s end (Gibbs is taking the reins in January), said some operators are “overleveraged and some simply aren’t the right operating partner for us to grow this brand.”

“We know this transition won’t be easy,” he added, “but we are committed to doing the right thing for this iconic brand over the long-term.”

Creed said the asset changes have been “an enormous distraction” for operators. Particularly as Yum! transitions franchisees out of the system and puts stores into the hands of new players.

“The great thing about the Pizza Hut U.S. business is we have plenty of people that want to get into it and are eager to buy stores and invest capital into fixing those stores and relocating them,” Creed said. 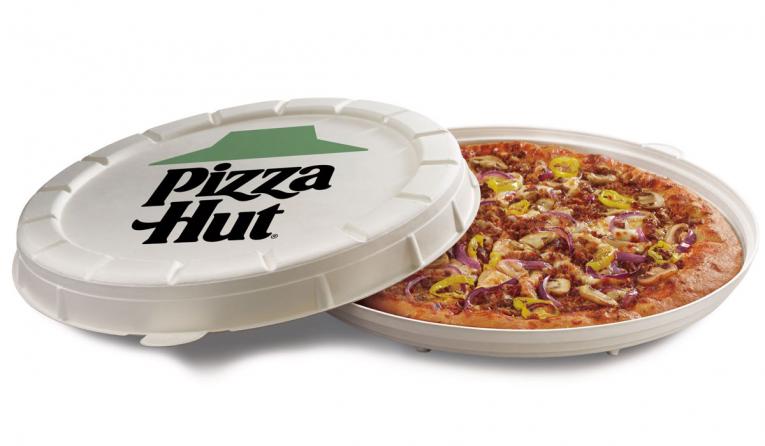 Essentially, Pizza Hut will emerge in 2021 as a very different organization not just from a model standpoint, but also from an operator one.

Creed added that some franchisees were saddled with debt that made it hard to relocate restaurants, “and that’s where we’re working through with those parties to get the stores in the hands of the right partners that are well capitalized to grow and build this business.”

It’s not the majority of Pizza Hut franchisees, he said. It is enough, however, to push bad debt up and lag the system’s overall performance.

“As you know, the [quick-service restaurant] category is facing a lot of wage pressures right now, and that is pressuring unit-level economics and franchisee’s economics,” Creed said. “But as we always remind people, building a new Pizza Hut is a good investment.”

The question was quickly becoming, was running an old store one?

“This is more about working through with a select group of franchisees that may have more debt on their business than they should, to get those stores capitalized properly and in the right hands of the right partners,” Creed said.

It’s a key piece in Pizza Hut’s plan to morph its system as opposed to simply trimming it. Creed said in Q2 the economics of building a modern delivery asset “work quite well for Pizza Hut,” meaning, for the most part, any trade area where a store closes, there should be an opportunity to rebuild in that market or nearby. Gibbs said some older boxes were erected in spots that made sense 30 or 40 years ago. Today, they just don’t work for delivery.

The goal for Pizza Hut then, with many of these restaurants, is to take a dine-in store in a dine-in market and move it to a trade area that fits off-premises-minded customers. The result, as its current fleet proves, would be more upside, less costs (important as wage pressures burden the bottom line), better system sales, franchisee economics, and an overall image to the consumer that mirrors Pizza Hut’s evolution instead of its history.

Not to mention, better-capitalized franchisees who have growth on the mind, as Creed alluded to.

That last note is really the present pain point. A worthy one to tackle, however, Gibbs said. “Of course, we know that when we have great franchise operators running first-class assets that are well positioned in trade areas to serve customers, we win in the marketplace and the Pizza Hut U.S. team is working hard to accelerate this transition.”

He added Pizza Hut’s U.S. business also decelerated in Q3 as changes to its value offerings helped franchisee margins, but had a negative impact on transactions.

Pizza Hut also expanded its Grubhub partnership pilot to 700-plus restaurants. Gibbs said the chain is “well positioned to leverage being listed on the Grubhub marketplace. But by fulfilling delivery orders through our own delivery network, this gives us better control of the customer experience.”

“All of that is a really good sign in terms of the strength of the Pizza Hut brand when it's executed in the market,” Creed said. “The Pizza Hut U.S. business … has some unique challenges given the dine-in state and the conditions of the assets and the locations of those assets. So that's what we're trying to address by moving to a more modern delivery estate and setting the business up for long-term health.”

As a company, Yum! reported diluted earnings per share of 81 cents and revenue of $1.34 billion in the quarter, down 4 percent from Q3 2018. Net income decreased 44 percent to $255 million from $454 million. The company’s overall same-store sales rose 3 percent. 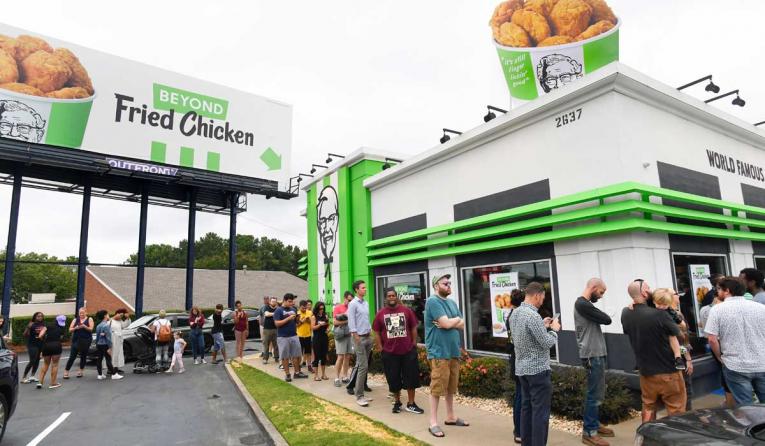 KFC generated 2 billion media impressions from its one-day Beyond launch.

A Beyond win for KFC

Yum!’s chicken giant had another strong quarter with total same-store sales of 3 percent on net new unit growth of 6 percent. The chain has lifted from 22,104 global units to 23,435 in the past year. U.S. comps declined 1 percent versus the 2018 period.

Gibbs credited the domestic result to a temporary loss of momentum with its Cheetos sandwich promotion. A deal that did land, though, was KFC’s Beyond Nuggets and Beyond Boneless Wings test in Atlanta that sold out in five hours. Gibbs said it generated 2 billion media impressions.

In other moves, KFC launched online ordering on its website in mid-October in conjunction with wings. The chain now has 2,700 restaurants offering delivery and 3,700 available for click-and-collect functionality.

Digital menuboards are in 1,000-plus stores with a simplified menu. Taco Bell said in August it was cutting combos in half to focus on easier ordering points and core items. Here’s a look at the changes, which are intended to make room for future menu additions as well.

Taco Bell’s delivery program is up to 4,800 U.S. restaurants and the brand has more than 14 million registered users for mobile and online ordering. Click-and-collect on Taco Bell’s website and app are nationwide.

Gibbs added that Taco Bell produced its fastest Q3 in terms of speed of service in five years. A summer speed challenge led to a 17-second improvement and three million more cars in the drive thru, he said.

21 Main Street, Suite 204
Hackensack
NJ
203-883-6060
SH Franchise Finance is an independent finance company, so we know what it is like (more)
POS Systems & Equipment