The Evolution of Food Safety

Increasing use of raw produce has quick-service operators paying closer attention to their food safety efforts.

The U.S. Food and Drug Administration

Quick-service restaurants have an obligation to their customers to provide safe food no matter which challenges may arise on a daily basis. Staff shortages, supply deliveries gone haywire, and increases in food costs all place pressures on foodservice operations, but few in the industry would argue that the importance of food safety trumps any other aspect of a restaurant’s business.

Providing safe food free of illness-causing contaminants is a continual challenge for operators, and technological evolution has not necessarily eased the burden. In a social media–driven age, just one small misstep can be broadcast to thousands of people in seconds. Combined with changing customer preferences, sweeping governmental legislation, and even good, old-fashioned biology, running a successful restaurant has become a balancing act on an ever-evolving landscape. To stay on top of their business, operators must continue to innovate, stay informed, and test and re-test their safety protocols.

While the latest estimates from the Centers for Disease Control and Prevention reveal a decrease in the number of Americans sickened each year from food poisoning over the past decade, the agency clearly stipulates that the decrease comes from improved survey methodologies and more accurate data, not from a decline in illnesses. The newest numbers, released in December 2010, show that one in six Americans will fall ill from food poisoning each year, compared with previous estimates that purported food-borne illness struck one in four Americans annually.

As a result, cost-impact statistics have been trimmed, too. Revised estimates now approximate that food-borne illness costs the U.S. $77.7 billion related to medical bills, loss of productivity, pain and suffering, and mortality. Previous estimates based on the older CDC data pinpointed the overall financial burden to be closer to $152 billion annually.

No matter the cost, no restaurant can afford to sicken its customers. Despite recent technological advances in areas such as pathogen testing, keeping food safe hasn’t gotten any easier. In fact, in the wake of America’s movement toward a healthier diet and lifestyle, the waters may have just gotten a bit rougher.

“In recent years, a significant trend is that more and more food-borne outbreaks are caused by produce,” says Sangwei Lu, associate professor of infectious diseases at the University of California at Berkeley. “Ten years ago, most outbreaks were caused by ground beef, chicken, things like that. In recent years, outbreaks have been caused by spinach, tomato, [and] peppers.”

Fresh produce has become more of a focal point in foodservice as nutrition has been put under a microscope. Various elements have led the shift toward better nutrition, from first lady Michelle Obama’s anti-childhood obesity “Let’s Move!” campaign emphasizing nutritious meals in schools to the new USDA Food Plate, which relegates half of a visual plate to be filled with vegetables and fruit. In addition, America’s soaring obesity rates and subsequent health concerns are a regular topic in the media.

In response, many quick-service restaurants are expanding lighter menu offerings, which include salads, raw produce–topped entrees, and juices. Locally sourced produce was the second most popular trend predicted for 2012 in the National Restaurant Association’s (NRA) recent “What’s Hot” survey and has been at the head of the list for the past several years. In comparison, results from the same NRA survey showed that chicken wings and comfort foods like macaroni and cheese were the most popular menu items on America’s restaurant tables a decade ago. 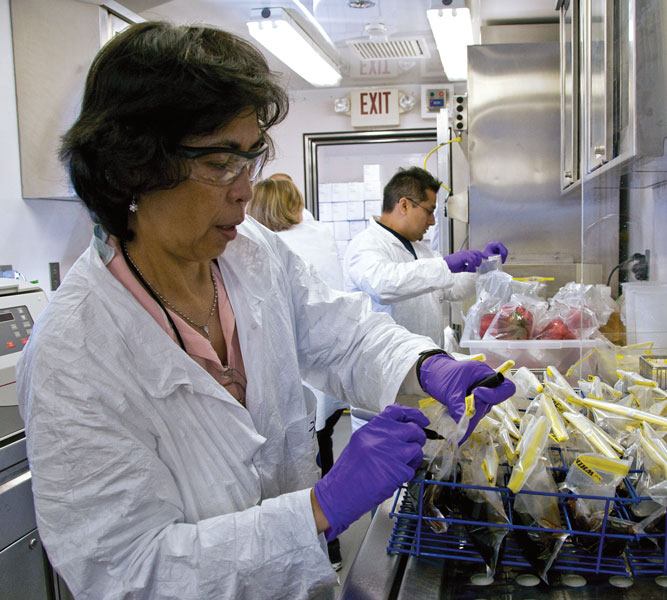 Also ranked highly were nutritionally sound meals for children, a consumer movement that is increasingly echoed on quick-service restaurant menus in the form of apple slices, vegetable sticks, fruit salads, and juices.

In a 2010 study by the National Fruit and Vegetable Alliance focusing on children’s produce consumption, children under the age of 12 have increased their fruit consumption by at least 7 percent in the past five years. Of all age segments, children are the most likely to consume the recommended number of fruit and vegetable servings per day.

Along with all of this focus on fresh produce are food-safety threats related to raw foods. Experts say food-borne micro-organisms on produce served raw may be even more difficult to manage than prior culprits—raw ground beef and poultry—as there is no potential to cook them away.

“I’d say it’s more than 99 percent safe,” Lu says of cooked foods. “With meat, people always cook it. However, with salad greens, people don’t cook it to begin with, so if pathogen contamination happens in any place along the chain, then people are going to get sick.”

Food safety consultant David Theno, known to many in the quick-service world as a key figure in Jack in the Box’s brand recovery from a 1993 E. coli outbreak, says the move toward healthier menu offerings has made the food safety landscape more challenging.

“There’s clearly been a move to fresher, lighter,” Theno says. “[There are] a lot more offerings where produce is involved, a lot more soups. Some of these foods are more difficult to serve in a safe manner. They require different levels of control. If you’re serving soups or cooking and holding and running all kinds of produce, that puts more pressure on the system overall.”

Next: Tracking down the contamination source.

“When you look at most pressing concerns in [quick service], you really have to look at those things that are risk factors that directly lead to food-borne illness,” says Jennifer Tong, director of food safety at NSF International, a non-profit organization dedicated to improving public health. “They want to have assurances through the chain that their suppliers are doing the right thing in regards to food safety. That’s really going to entail them understanding and knowing their supply chain.”

For restaurants serving fresh, raw produce, ensuring that growers and processors are taking every precaution to avoid contamination can be difficult.

“On the supply side, one of the biggest risks today is produce,” Theno says. “There are many people who are trying to do a better job, so I don’t want to demean the [produce] industry, but I can tell you there are a lot of people who are not doing as well as others.”

One of the most challenging aspects of food-borne illness is how difficult it can be to track the contamination source. What’s more, scientists can only identify pathogens that cause 20 percent of food-borne illnesses. One of the biggest food-borne pathogen threats, Escherichia coli 0157:H7, commonly referred to as E. coli 0157, was identified as a food-borne pathogen only 20 years ago and was known previously as a micro-organism found in cattle. Tracing its path into human food has proven evasive.

“Pathogens like E. coli 0157 are comparatively new in humans. The first case was recorded in 1980, so in the beginning it was detected mostly in cattle,” Lu says. “It’s most likely in wild animals, too. It’s difficult to keep wild animals out of the growing field; that may have something to do with it.”

If soil in the growing field is contaminated, for example, growers and processors who handle the produce have wide potential to spread the contaminant if equipment isn’t properly cleaned and produce isn’t washed thoroughly. Experts suspect several recent outbreaks have originated in stages before the produce arrived at restaurants: in the growing field, from cross-contamination on processing equipment, even exposure to contaminated ice during the shipping process.

The results can be grave. Last year, the second-most deadly food-borne illness outbreak in the U.S. since the CDC began tracking data was attributed to listeria-tainted cantaloupe sold pre-cut in fruit trays and fruit salad. Jalapeño peppers and possibly tomatoes were the culprits in a 2008 salmonella outbreak that sickened hundreds of people across 43 states. In 2003, scallions served chopped and raw in salsa at a restaurant chain caused the worst hepatitis A outbreak documented in the U.S. Last year, an E. coli outbreak related to raw bean sprouts grown in Germany sickened thousands across multiple countries and resulted in 50 deaths.

Recent statistics on food-borne illness in the U.S. shows that progress over the years has been mixed. While there have been significant decreases in major pathogen outbreaks such as E. coli 0157 and listeria since 1996, salmonella infections have increased slightly, according to FoodNet, a multi-agency program that gathers food-borne illness data.

Even the simplest food-safety practices continue to challenge restaurants where turnover rates are high and the staff tends to be young and inexperienced. Safety protocols and governmental regulations provide a framework by which to train employees, but the key is strong leadership, Theno says.

“How often is an inspector in a facility?” Theno asks. “Regulations give you a minimum set of standards, but if you’re going to make food safety happen, it’s a leadership thing. I don’t think we need more laws, we need more leaders.”

Indeed, strong management is a constant that can be applied over the vast number of localities that monitor food safety. Throughout the country, there are approximately 3,500 state and local health jurisdictions. Subject to guidelines that are adopted differently from county to county, foodservice operators know just how complex multi-state compliance can be.

With so much variance from location to location, on top of daily pressures like labor and supply chain, Theno has seen the best results in organizations where management places food safety at the top of the list.

“Where it’s done exceptionally well it’s because the leadership really owns these matters—they walk the talk, they live it,” Theno says. “Every day they ask questions that show their team that food safety is as important if not more important than everything else they do every day in the restaurant. When that leadership philosophy is present, I find their restaurants are in much better shape.”

As seen with industry-wide sales lost after contaminated spinach and eggs from specific sources caused outbreaks, financial repercussions from food-borne illness can be widespread and indiscriminate. While food growers or processors were at fault in some cases, restaurants are the customer-facing element in the chain whose brand will be linked to sickened customers.

One example is Taco Bell, where sales fell an estimated 20 percent after the 2006 E. coli outbreak from tainted lettuce that sickened 71 people across five states. Parent company Yum! Brands suffered a downgrade of its stock by industry analysts shortly afterward.

Perhaps most notorious has been the shuttering of all 65 Chi-Chi’s Mexican restaurant locations the year following a hepatitis A outbreak that sickened hundreds and led to three deaths. The outbreak was traced to green onions grown in Mexico that had been contaminated during the growing or packing process.

Food safety, Theno says, cannot be emphasized enough. He considers it to be the most critical operational element in the business. “There’s one element that if you’re not doing it right, your whole business can go away tomorrow,” he says. “And I know with great certainty that that can happen.”

There are more changes on the horizon. Regulations being drafted under the Food Safety Modernization Act, signed into law in early 2011, include a mandate for produce safety, which the agency will finalize this year.

As with any sweeping legislation, however, it’s too early to predict how transformative the new regulations will be.

“When speaking specifically about the Food Safety Modernization Act, that definitely is just too early to tell. We’re still waiting and hopeful that it will have a direct impact,” Tong says.

Preparing for the Potential Increase in Restaurant Turnover
Investor: Luckin Coffee Will Overtake Starbucks in China
Portillo's Knows its Pricing Strategy is Working