Franchisees are racing toward a food-truck opportunity that opens accessibility to the classic brand.

Auntie Anne’s has long been a staple in malls and airports across the U.S. The smell of warm, salty pretzels enticed travelers and shoppers alike from the brand’s storefront and kiosk locations for more than 30 years. But what about the customers craving a doughy snack who aren’t traveling or strolling through the mall? Where do they go when they want an order of pretzel nuggets or a pretzel dog?

They might just find themselves waiting in line at one of Auntie Anne’s food trucks. This latest iteration of the classic brand is popping up nationwide, and the excitement isn’t confined to customers.

“Well, you know, the retail landscape has changed dramatically,” franchisee Linda Reed says when asked why she decided to open the first Auntie Anne’s food truck in California. “So, this was an opportunity to really go where the people are and to get to the places where there’s lots of people and lots of things happening in Los Angeles.”

Reed opened her first Auntie Anne’s location 28 year ago. The success of her debut unit, located in Glendale, California, led to the opening of several other stores across California. Before long, Reed oversaw nine locations and continued to introduce Californians to the world of pretzels. “People really didn’t know pretzels in California,” Reed says. “They’d come up and order a bagel and you have to kind of explain to some, it’s a pretzel.”

After decades of success operating traditional units, Reed says her youngest son began to push her toward the food truck model. After three years of hearing why she should go mobile, Reed pulled the trigger.

The truck, primarily used for events, has brought in as much as $10,000 per day.

“When we did the BTS concert at the Rose Bowl, we had 300 people in line for five hours straight,” Reed says. “A lot of them waited in line for an hour before the concert started for a pretzel.”

Reed’s success with the mobile concept led to her opening the first Cinnabon food truck in 2020, another chain in the FOCUS Brands portfolio.

Auntie Anne’s mobile success hasn’t been limited to concerts at the Rose Bowl. Just ask Sam and Brian Hardesty, who operate multiple Auntie Anne’s trucks across Kentucky. Sam Hardesty worked as a middle school teacher before leaving education to open her own mobile unit with her husband, Brian.

On top of the brand’s loyal following, what makes these models so successful is their ability to consistently introduce product to a new area, the Hardestys say. If one location they visit works well, great. If not, that’s OK, too, because they aren’t grounded (literally) to that spot. 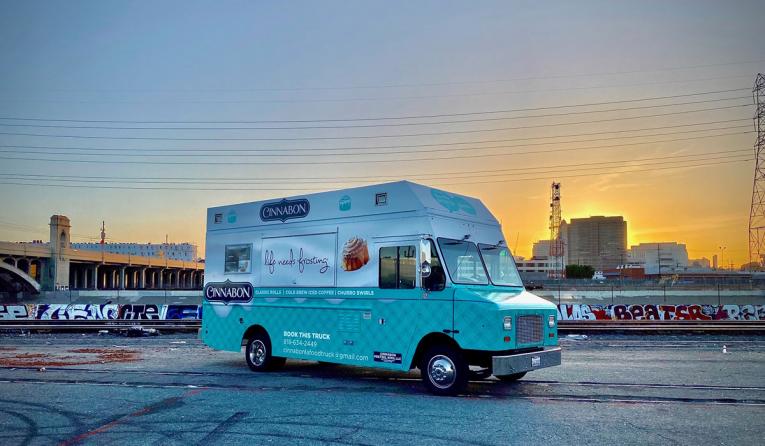 “That’s really the perk of having a food truck,” Brian says. “With most brick-and-mortars, you see that they’re super busy for the first two or three months and then business dies down a little. The luxury of being a food truck is we’re the new person in town wherever we go. We stagger our visits about every eight weeks or so, that way we’re always that new person coming in.”

This approach has served the Hardestys well to date. With two food trucks already operating, they plan on opening several more to serve the various regions of the Bluegrass State.

“We have our truck in Elizabethtown, and the Paducah truck,” Sam says. “The Paducah truck can actually hit five different states [Kentucky, Tennessee, Missouri, Illinois, Arkansas] because the five states are within a 100-mile-radius of each other. We haven’t decided where we want our third truck but maybe somewhere in the Middlesboro area so we can also serve Knoxville [Tennessee]. We would like to have both of those trucks operational within about 18 months.”

Popping up across smaller cities and towns is a strategy Chris Coleman also employs.

Coleman, who opened his Auntie Anne’s food truck at just 29 years old, says customers in small towns are excited at the prospect of having the truck set up shop in their area.

“I’ll make a Facebook post and let them know we’re there,” Coleman says. “We get like 200–300 shares and there will be a line from the time we open until the time we close. For them to see that food truck in their town is exciting for them. Our numbers are very good. I think they [small-town customers] spend more money when they visit us because they don’t know when we’ll be coming back.”

Like the Hardestys, Coleman wants to grow his fleet. With a goal of five units in the next few years, Coleman offers advice for anyone thinking about getting into the food truck game.

The food truck business is not for the faint of heart. Linda Reed echoes Coleman’s sentiment, saying, “you have to recognize it’s a hard business because you’re basically starting over every time you go out, you have to break down, you got to set up again, you’ve got to restock.”

Hard work aside, for Reed, partnering with Auntie Anne’s was about the dedication to the brand.

“When I met the people and saw the passion they had for the brand,” Reed says, “everyone that was associated with Auntie Anne’s had it and that passion is still there. That’s the main reason why I got involved.”