The Family Affair of Running a Subway Franchising Empire

More than 30 members of the Grewal family are involved with the business.
Franchising | October 2019 | Danny Klein

For the Grewal family, Subway is a family affair you could truly pack a room with. There are more than 30 members of the family currently working at some capacity in the Subway system.

Since 1989, they’ve built a franchise empire with more than 50 restaurants throughout California, Virginia, Washington, D.C., and Ontario, Canada.

The key: While the Grewals operate restaurants in different markets, they treat each individual store as a local business, and they said this mindset is critical to not only run a profitable restaurant, but to also impact their communities. The Grewals, in just Washington, D.C., partner regularly with the American Diabetes Association. In Canada, family members donated $1 million to Concordia University in Montreal.

For one Subway franchise family, the brand is in their DNA

How franchising can teach the meaning of hard work

The family shared some insights with QSR on giving back, staying on top of trends, and what it’s been like rolling with the changes over the years.

Firstly, talk about how you got involved with franchising, and with Subway?

Hardy Grewal: In 1989, a friend of mine bought a Subway restaurant. At the time, I was an accountant, so I was helping him with his books. It was during this time, that I learned he was doing very well for himself and that piqued my interest, especially since the investment to own a Subway was lower than other franchises, and the return of investment was high. Immediately, my wife and I were inspired to open a restaurant of our own. During the first two years, my wife ran the restaurant while I continued working as an accountant. In 1991, my brother Charlie came into the business, so we bought a second restaurant together and shortly after that, I decided to invest all my time in the Subway business. We continued steadily growing and by 2006, we had opened 25 restaurants. That same year, we had an opportunity to become Business Development Agents in Los Angeles and over the next eight years, we expanded into Orange County, California, Canada and Washington D.C., bringing our territories to close to 2,000 restaurants.

What were those early days like? Did you ever imagine this maturing into a 50-plus store operation with so many family members involved? (The Grewals own 50-plus units but oversee about 1,800 resturants)

Hardy Grewal: We saw early on that the Subway business model is designed to grow Franchise Owner profitability, so we were confident in opening more restaurants. However, I didn’t imagine that I would expand to three territories and for this to become such a large family operation.

What were some of the biggest early lessons?

Hardy Grewal: You need to let go of some of the control in order to grow. I’m very hands-on and coming from an accounting background, I’m very meticulous in accounting, inventory, advertising, and other aspects of the business. That was a bit hard for me and for my wife in the beginning. She worked seven days a week at that time, so when we opened our second restaurant in the early 90s, we had to learn to give up some of the control as we couldn’t be two places at once. That’s when my brother Charlie and other family members began helping us out.

What are some of the biggest changes today versus back then in terms of running restaurants?

Hardy Grewal: It was a cash business in the early days, so it was a bit difficult to trust other people to handle and manage the business correctly. Through the years, we found great people, built that trust, and were able to expand and share the success. Many of them are still with us today as Franchise Owners.

Another challenge was that all accounting was done by hand, which was very time consuming. I came up with a spreadsheet program I designed, which was later used by many franchises in the system.

Bob Grewal: Some challenges remain the same. For example, employee retention. Any good business runs on good partners, good team members and employees. It’s always a challenge to find employees that care about the business as much as you do. We’re fortunate to have found success in that regard. My uncle, Hardy came up with the idea of giving our District Managers a share of the company; making them our partners in the restaurants, they oversee (five of six restaurants each). This has been very successful as they are invested in the business the same way our family is. 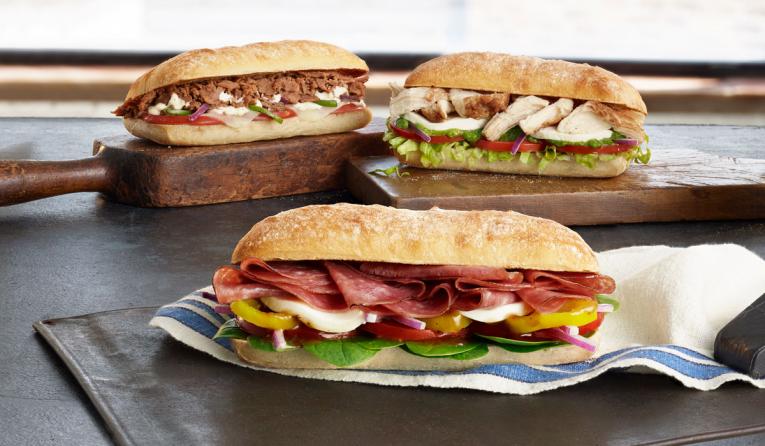 Subway has made no shortage of menu innovations this past year, like its Ciabatta Collection.

There are a lot (a lot) of opinions out there about running a business with family. How have the Grewals made it work?

Bob Grewal: We stay out of each other’s way and have clear roles and responsibilities. Each part of the business is run by different family members, based on expertise. For example, my cousin Shawn runs leasing in LA, while I handle local marketing. Our niece is a controller, so she handles accounting. We respect and trust each person’s role in the business.

What would you say is the best part of having 30-plus family members involved?

Bob Grewal: Much like Subway restaurants, family is the core of our values and there’s a level of trust and loyalty you have with family that’s harder to find in others.

What is the toughest challenge?

Bob Grewal: The challenge is that we talk about business all the time! Even at family events. Shawn usually tries to keep us focused and find times to not talk about work, but it’s difficult!

Is there a career path you set up for family members who want to get involved?

Bob Grewal: No one in the family is guaranteed a spot in the business. Many family members start out working in the restaurants, learning the ins and outs of the business. In some cases, they become Franchise Owners and run their own restaurant. Once they have proved themselves in that arena and have developed a passion and intimate knowledge of what it’s like to run a restaurant, they might join the family busines—there are no handouts. In this business, you need to always do the work and prove your value. We don’t rest on our laurels.

Jesse Grewal: My earliest memories are of being in a Subway restaurant. It was my summer and weekend job throughout high school and college. I’d make sandwiches, sweep floors, etc. Starting from the ground-up, you get a great understanding of the nuts and bolts of the business. After graduating college and working as a CPA for a few years, I got into the family business, as I wanted to help it grow and work for myself.

Talk about the community aspect of your franchises. How important has that been to the locations’ success? And how big of an impact do you think that has on a multi-unit chain in general when you’re trying to grow?

Bob Grewal: Like the Subway brand, giving back to the community is very important to our family and our business. We work with a variety of local organizations donating money, food, and our time to help those in need.

Every year, we participate in a big donation drive to the LA Rescue Mission that helps the homeless in L.A. We get others in our network, including Franchise Owners within the territory, to participate as well, and have been excited to donate about $25,000-$30,000 a year for the past several years. In addition, we often work with the Red Cross to support disaster relief efforts in Southern California by providing food.

It is imperative for any business to support the local communities in which they live and work. We take great pride in giving back and our goal is to inspire future entrepreneurs by fostering education. We participate in outreach to schools and universities where our restaurants are located, including our Alma maters. Hardy made a big donation of $1 million to the university he attended in Montreal to endow MBA scholarships to inspire future entrepreneurs.

Hardy Grewal: We also help communities internationally. Last year, more than 70 members of our Subway family worked to help about 400 people in India with limited access to healthcare get eye exams and eyeglasses.

What are some community-driven best practices you deploy at locations? Grand openings. Giving back. Etc.

Bob Grewal: Many Subway Franchise Owners participate in a number of community-lead initiatives and Grand Opening celebrations. At Subway, it’s important that the Franchise Owners have that freedom to do what works best for them and the communities they serve. In our restaurants, we host Grand Openings and prize giveaways for our guests for our new and remodeled restaurants.

Where do you think the sandwich category is going? And how is Subway evolving to stay ahead?

Bob Grewal: The sandwich category is growing. There are many new players over the past few years, so the competition has greatly expanded. However, Subway has paved the path and has always been ahead of many of its competitors. The brand created the model of “build-it-as-you-go,” which allowed guests to see their sandwich being made. We have added a huge capability and competitive edge with our food innovation team and approach. This allows us to quickly test and learn, as well as get ahead of trends. We’ve seen this most recently with new products from the Hand-Spun Halo Top Milkshakes to the Beyond Meatball Marinara.