They're finding that their skills on the court and field translate perfectly to the limited-service restaurant industry.

Though Hank Aaron retired as baseball’s home run king in 1976, he continued hitting home runs long after he left the diamond—albeit in the quick-service restaurant business.

Hammerin’ Hank entered the quick-service game in 1988 when he franchised an Arby’s restaurant in Milwaukee, the first of 10 he would eventually own in Wisconsin. Aaron later expanded his restaurant empire and, today, his 755 Restaurant Corporation runs two Krispy Kreme units and 26 Popeyes restaurants in Georgia.

“To be honest with you, I was scared when I retired from baseball,” Aaron told the Atlanta Journal-Constitution in 2004.

Though Aaron was among the game’s undisputed superstars during his playing days, he never earned more than $240,000 in a season and feared he would never “make good money again” in retirement. Entering the restaurant industry afforded Aaron a way to solidify his financial standing, appease his competitive energy, and drive diversity in the business world.

Aaron set a path that many others have followed. Today, former and even current professional athletes pepper the restaurant landscape as franchisees, investors, and executives. Tennis star Venus Williams joined Jamba Juice as a franchisee in 2011, while record-setting NFL quarterback Drew Brees has created a restaurant conglomerate that includes Jimmy John’s and Dunkin’ franchises (as well as part ownership of Walk-On’s Bistreaux & Bar). NBA star LeBron James was an early investor in Blaze Pizza, and Hall of Fame quarterback Joe Montana’s venture capital firm recently invested in Curry Up Now. Retired NBA star Ray Allen and his wife, Shannon, opened the organic fast casual Grown in Miami in 2016, and basketball icon Shaquille O’Neal’s business empire includes Auntie Anne’s and Krispy Kreme units, along with his own Big Chicken fast-casual brand—oh, plus he’s an investor, board member, and spokesman for Papa John’s.

Across the U.S., professional athletes have swapped playbooks for P&Ls, competition for the kitchen, and rivalries for restaurants.

The Quick-Service Entrepreneur: While playing for the Dodgers in 2013, a former teammate called González and told him he was purchasing a Jersey Mike’s franchise. González invested some money into that effort, which grew from one store to three. González later became that group’s majority owner and brought in two operating partners. He now owns eight San Diego–area Jersey Mike’s and three in Palm Springs, California, with a fourth one slated to open this summer.

The Appeal: “Initially, it was the taste test. The bread, the meats sliced right in front of you, the fresh veggies—it all creates the feeling of a good homemade sandwich,” says the 37-year-old González, who favors The Turkey and Provolone and The Original Italian at Jersey Mike’s.

The Future: González appreciates Jersey Mike’s community-minded ethos, characterized by its annual Month of Giving campaign that most recently funneled upward of $8 million to some 200 local charities around the U.S.

That ethos kicked into gear during the pandemic, when González was among a group of franchise owners who donated millions of subs to healthcare workers and others in need. He also contributed to Jersey Mike’s fundraiser for Feeding America, which collected more than $2 million.

While González said before the pandemic that he was exploring more opportunities in the fast-casual space, he's now focused on the well-being of his guests and employees at Jersey Mike’s. Key to that is the brand’s communication. “Things are changing every day,” he says. “Good communication keeps everyone on the same page and ensures we are on top of everything operationally.” 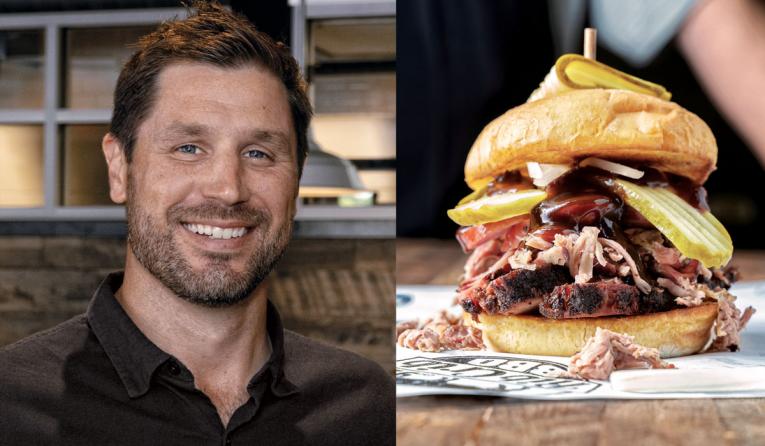 The Athlete: Garrett Mills was a record-setting tight end at the University of Tulsa before being drafted by the New England Patriots in 2006. He played for the Patriots, Minnesota Vikings, and Philadelphia Eagles, among other teams, before exiting the league in 2012 to get his MBA at Northwestern University.

The Quick-Service Entrepreneur: Mills spent a few years working in investment management at Goldman Sachs’ Dallas office before connecting with Bret Chandler, founder of Chandler Hospitality Group, parent to full-service barbecue chain RibCrib, which now has 60 locations in five states. Mills joined the company in 2017, serving as vice president of strategy before being promoted to CEO and president in 2019.

Before the pandemic, Mills was overseeing an aggressive franchise strategy for RibCrib, one that includes a counter-service prototype and smaller footprint. That direction is even more important today. “For us, understanding that shift in off-premises business, even in the full-service units, is something that we’re thinking about both from back-of-house setup to drive-thru windows to expanded pickup counters,” he says.

The Appeal: RibCrib has established a loyal following with its slow-cooked, hickory-smoked ribs, brisket, and pulled pork. To date, it’s been a regional success story, but Mills believes it’s something that will resonate nationally, and franchising can help it get there.

“We see big opportunity for this,” he says. “[We’re putting] our brand out there to hopefully get some interest from some big multiunit heavy-hitters. We see the opportunity being more on a national scale.”

The Future: Like most full-service brands, RibCrib’s sales plummeted in the immediate aftermath of the COVID-19 pandemic. But by summer, Mills says, year-over-year sales drops were in the single digits, and the company was still pursuing its growth strategy, which includes new markets where RibCrib will expand with both full-service and counter-service stores.

The athlete in Mills is enjoying the challenge. “The competitive nature of our business motivates me and makes this fun,” he says. 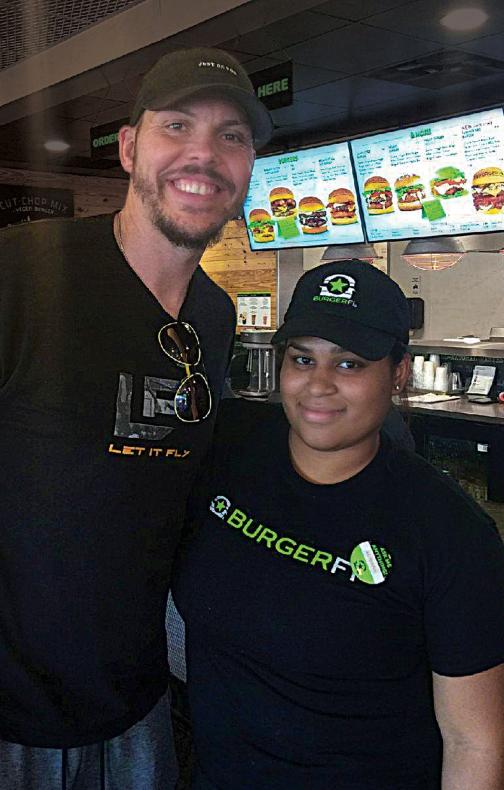 The Athlete: South Dakota native Mike Miller starred at the University of Florida before entering the league with the Orlando Magic in 2000. The sharpshooter played for seven different teams over his 17-season NBA career, winning the 2001 NBA Rookie of the Year and 2006 Sixth Man of the Year awards along the way.

The Quick-Service Entrepreneur: Miller became involved with BurgerFi while playing for the Miami Heat alongside teammates who would also get involved in the quick-service industry, including LeBron James (Blaze Pizza), Ray Allen (Grown), and Dwyane Wade and Udonis Haslem (800 Degrees Woodfired Kitchen). Spurred by his own personal experiences at BurgerFi restaurants, Miller became a franchisee and now owns 10 BurgerFi units across six states.

The Appeal: Miller saw BurgerFi as a concept hitting on important dining trends. It provided a high-quality, unique product for those who needed a “quick and comfortable” meal while also accommodating those who desired a more relaxing or slow experience as well.

On the court, where he won a pair of titles with the Heat, Miller found success to be the result of ongoing efforts to improve individually and collectively. The restaurant game, he says, isn’t that much different. “Surrounding yourself with the right team is vital for success,” he says. “And working daily to ensure continuous improvement throughout every location is imperative to stay ahead of trends and ensure guests’ expectations are exceeded daily.” He calls that constant quest to create memorable experiences for guests “exciting and rewarding.”

The Future: Prior to the pandemic, Miller had three additional BurgerFi locations under construction. While there's no word on how COVID-19 might have changed plans, BurgerFi continues to grow; in the summer, the company announced its intention to go public. 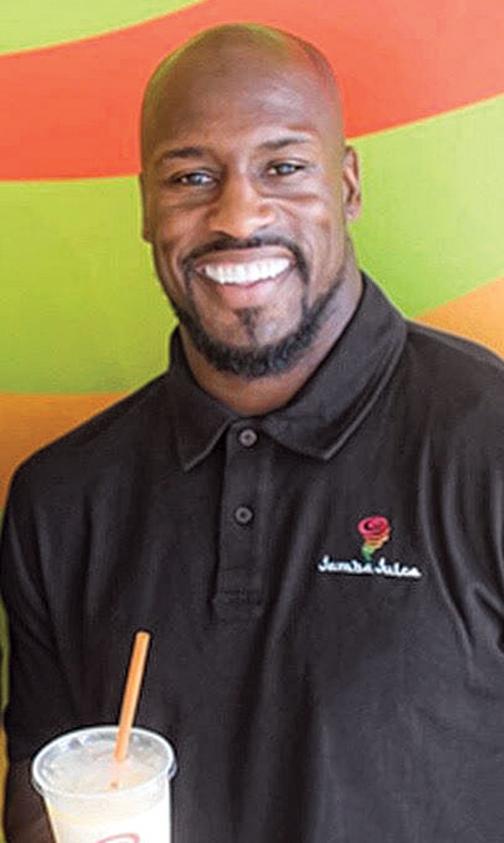 The Athlete: Vernon Davis was a first-round draft pick of the San Francisco 49ers and played tight end for three teams over a 15-year NFL career. The 36-year-old Davis won a Super Bowl as a member of the 2015 Denver Broncos and retired following the 2019 season.

The Quick-Service Entrepreneur: Introduced to Jamba as a 49ers rookie in 2006, Davis became such a fan of the brand that he reached out to the company in 2010 about a potential partnership. While Davis and Jamba drafted plans for a traditional marketing endorsement deal, Davis soon realized he desired more than pitchman status. “I wanted to be an owner and grow the brand as well as my own business,” he says. A hands-on franchisee who holds monthly conference calls—“Vernon’s Jamba Huddle”—with his team members, Davis owns five units in the San Jose, California, market and is developing five additional units in metro Washington, D.C.

The Appeal: Davis says he likes that the quick-service model has been battle-tested. He adds that he loves showing his children that they do not need to be a celebrity athlete to be successful, and that the hard work he poured into being a successful NFL player just moved to the back office. “In the Jamba business, it’s the details of understanding market trends, unique ways to increase employee morale, and navigating through our P&Ls with a fine-tooth comb that creates success,” he says.

The Future: Davis set a goal of owning at least 25 Jamba stores across the U.S. And while the pandemic has forced him to push back some opening dates, he says it hasn’t otherwise affected his plans for growth.
“I learned very early on in my business career, after going through the real estate crash of 2008, that economy ups and downs, natural disasters and unforeseen peaks and valleys, are going to happen not only in business, but also in life,” he says. “What’s important is that I show my team the faith I have in them and my confidence that we’ll weather any storm.” 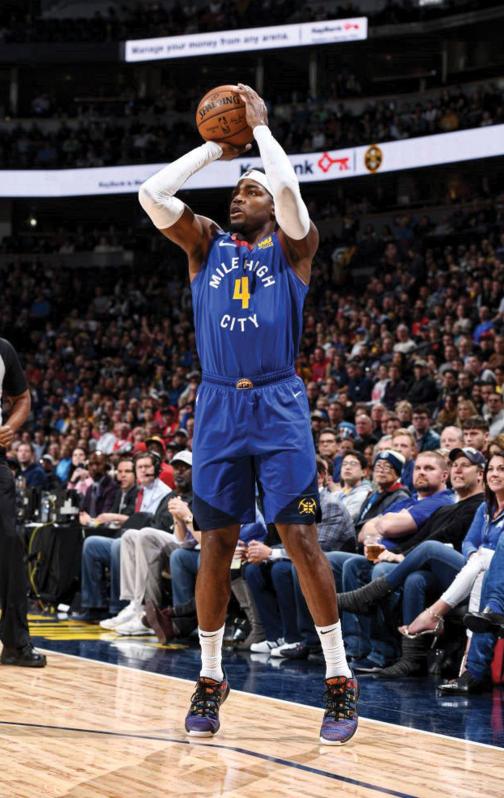 The Athlete: A member of the Denver Nuggets, Paul Millsap is in his 14th NBA season. Known as a tenacious rebounder and savvy scorer, the 35-year-old Millsap has earned four All-Star nods over his decorated career.

The Quick-Service Entrepreneur: Raised on Louisiana home cooking, Millsap joined This Is It! Southern Kitchen and BBQ as the Atlanta-based chain’s first area developer last November. The development agreement with This Is It! parent Belief Brands is “open-ended and something we expect to grow significantly over the next 10 years,” he says, though he notes that things are on hold until the pandemic is over.

The Appeal: Millsap says This Is It! not only offers the convenience, comfort, and quality that has spurred the fast-casual category’s rise, but it can also accommodate different diets. “If you want some great Southern comfort foods that stick to your ribs and make you smile like your grandma’s cooking did, we’ve got that,” he says. “But if you are really focused on your nutrition and have specific diet objectives, whether that be wanting to control your caloric intake or simply avoid meat, you can have a delicious meal at This Is It! and not feel guilty.”

Though Millsap has yet to open his first This Is It! unit, he’s eager to bring his penchant for continuous improvement and everyday effort to the brand. “Just like in sports, you owe it to yourself, your teammates, and your fans to do whatever it takes,” he says. “No excuses; no shortcuts.”

The Future: While Millsap might entertain future opportunities in the restaurant industry, he says his immediate focus is solely on developing the This Is It! brand. “It’s had an amazing following in Atlanta for nearly 40 years, and I’m anxious to help share it with the rest of the world,” he says. 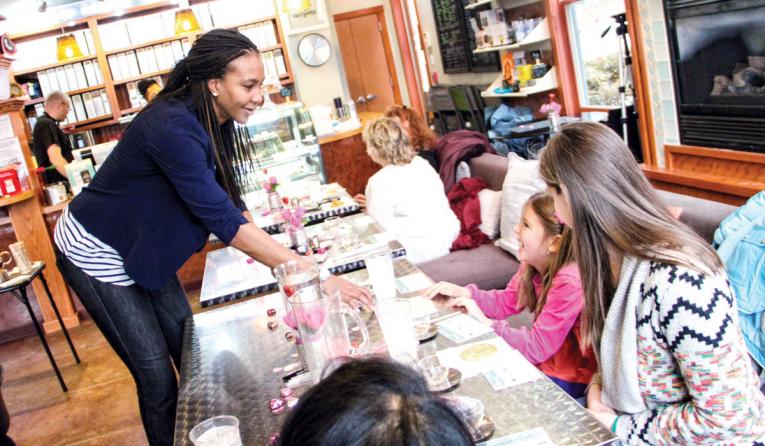 Tamika Catchings won many accolades during her 15-year WNBA career, including the league’s most valuable Player Award in 2011.

Tamika Catchings is a four-time Olympic champion who was recently named a 2020 finalist for the Naismith Memorial Basketball Hall of Fame. A self-described avid tea drinker, Catchings couldn’t bear the thought of her favorite Indianapolis tea shop, Tea’s Me Café, closing when decade-long owners Stacey and Wayne Ashford announced they would move south for semi-retirement. So, not long after playing her 457th and final game for the WNBA’s Indiana Fever, Catchings purchased the café in 2017. The 1,200-square-foot tea bar and café boasts more than 40 tea flavors and had, prior to the pandemic, a strong community focus highlighted by open mic nights, book clubs, knitting circles, and youth events.