One of the food world’s most influential figures just franchised his sandwich fast casual and is looking to go big on expansion.
Franchising | October 2019 | Sam Oches

There are a lot of sandwich franchises out in the world, but none have a founder with as much culinary cache as the latest entry into the space.

Tom Colicchio is franchising his sandwich fast casual ’Wichcraft, a brand that pre-dated much of the fast-casual category when it first opened in 2003. The renowned chef—owner of fine-dining restaurants like Craft, Riverpark, and Temple Court, and the head judge on Bravo TV’s popular show “Top Chef”—is looking to scale the concept, and says franchising is the most logical model to do so.

“For me, I just looked at it and said, if I actually want to grow this thing, and get it to 200 stores in the next five or seven years, I can’t do it on my own—especially because I have one hand in ’Wichcraft and one hand in my restaurants,” Colicchio says. “Reality sets in.”

Colicchio adds that he doesn’t want to open any new shops in his home market of New York City. While ’Wichcraft’s food and labor costs are aligned with industry norms, he says, rent and occupancy costs are “through the roof.” Add to that a saturation of restaurant concepts in New York—particularly in the fast-casual category—and the greatest potential for ’Wichcraft to grow lays outside the Big Apple.

The brand’s small New York footprints are also such that it has to cook in a commissary rather than on-site—something of a disadvantage for a concept designed around chef-crafted sandwiches. Colicchio plans to change that in franchise locations.

“With the fried chicken craze right now, we can’t do that because we don’t have a fryer,” he says. “We can’t do grilled meats and things like that. There’s a limit to what we can do, and we’re looking to change that. Going outside the city, we’re looking for a larger footprint and more ability to do a little bit more.” 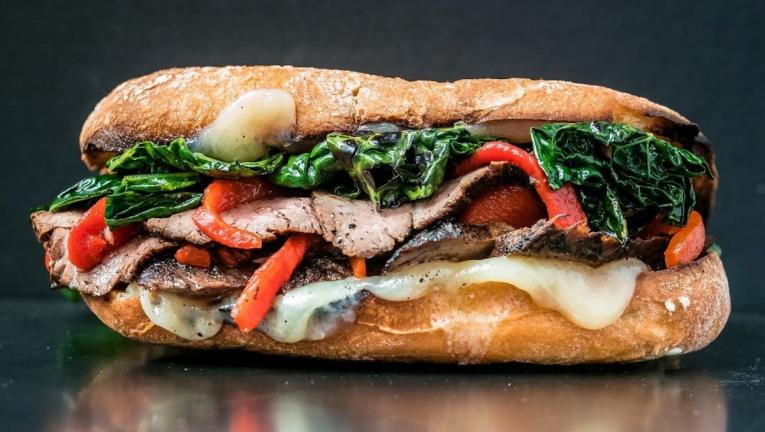 ’Wichcraft’s growth history has been something of a roller coaster. At one point the concept had nearly 20 locations, including shops in Las Vegas and San Francisco. But business went south, and by 2016 several had closed. At that point, Colicchio told QSR in 2017, the team realized they would need to overhaul the business structure in order to set ’Wichcraft up for success.

“It was a point in our business where we had to make some drastic changes because we were starting to fall behind,” Colicchio told QSR then. “We were starting to see some stores not work out. That’s the thing: It wasn’t just about rebranding and redesigning the stores. … It was more of a, ‘We need to grow up.’ We were treating it like a restaurant, and it’s not a restaurant. It’s a different business.”

So ’Wichcraft underwent a soups-to-nuts rebrand, tweaking everything from store design and logo to menu and the make line. And while its store count has shrunk to four—all in New York—Colicchio says the restaurants are now profitable, and that the company has “cleaned up” the operation. President Dan Guaricci is running operations, leaning on his past experience as director of operations for Pret A Manger.

The rebrand, Colicchio adds, succeeded in creating a fast-casual concept that was more in line with consumer expectations. ’Wichcraft’s chef-driven menu, which now includes seasonal options, is also more familiar to the masses who have a bevy of quality fast-casual restaurants available at their fingertips. A Roasted Sweet Potato & Brie sandwich shares the menu with a Grilled Flank Steak & Kale option, but also Turkey & Avocado and Cubano offerings.

Colicchio says the rebrand also allowed ’Wichcraft to set up a restaurant concept that is fully formed and ready for franchisees.

“We already went through all of the hard work in being able to hand someone a package and say, ‘Here’s the plan,’” Colicchio says. “A lot of the hard work was done, it was really a matter of getting our legal work done and redoing our operations manual and things like that.”

With everything in place, Colicchio and his team are now looking for experienced fast-casual franchisees who want something “a little more upscale, a little more chef-driven” that they can add to their portfolio mix. He hopes to do 10 stores in the franchise program’s first year, and maybe 20 the year after.

The priority, he adds, is to find franchisees who are also operators—not just someone who hires other people to run it for them. While the chef once figured franchising would never be a fit for him, he says he’s come to understand that good franchisees with a passion for their brands are just as good as the founders and executives at running good restaurants—if not even better.

“You start looking around, you look at the franchise model, you start meeting some people who own several franchises, and they’re like, ‘It’s our business, we run it, we know it’s a tight business, we’re there, we’re in our stores, and we have a passion too,’” Colicchio says. “Just because they’re not conceiving a concept doesn’t mean they’re any less passionate about it.”