A look back at moments from QSR’s first 200 issues.

The quick-service restaurant industry is always changing, and for 17 years and 200 issues, QSR has been there to write it into the history books.

As the leading source of news and information for the industry, we’ve watched trends come and go, brands rise to prominence while others fade away, and technology and tools evolve by leaps and bounds to help restaurants better serve their customers. Through it all, we focused our copy on the news and ideas that we thought would make the biggest impact on your brand.

We weren’t always right (YouTube is best avoided? Eastern Europe the hot new international market?), but, thankfully, most of the time we were. We were there when fast casuals exploded onto the scene. We called Panera Bread “One to Watch.” We predicted mobile ordering, the local-ingredient push, and the craze over quinoa and cupcakes. And we followed along as the healthy-eating spotlight bounced from carbohydrates to trans fats to sodium to gluten.

To celebrate our 200th issue, our editorial staff dug through the entire QSR archives to pull out 200 ideas and moments from the last 200 issues that best illustrate how far the industry has come. Looking back over the last 200 issues of QSR is, first off, a nostalgic uppercut. But it’s also an educational experience; you realize how cyclical this industry is (McDonald’s is struggling! Minimum wage increases threaten the entire industry!) and you figure out that most new trends aren’t all that new at all (you guys, we’ve been talking about Millennials for almost nine years).

Here, we present our 200 favorite ideas from the QSR archives. Some were way off. Some we nailed. But all are significant in their own special way. 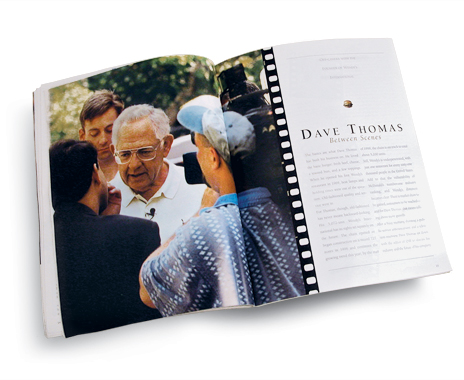 • “Profit is not a dirty word.” —Wendy’s founder Dave Thomas

• “Home-meal replacement” a buzzword and threat to quick serves.

• Study drive-thru performance and report on the results, affect change in the industry.

• Use (print) newsletters as a way to connect with customers.

• The industry struggles to staff restaurants because unemployment is so low. 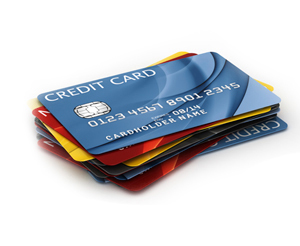 • On C-stores and foodservice: “Are quick-service chains educating their own worst enemies?”

• On a tight labor market: “How the desperation for labor is keeping drug testing out of quick-service labor management.”

• Improve the quality of menu items.

• A weeklong strike at a McDonald’s in Ohio has the industry fighting unionization.

• A good idea, 10 years on: QSR looks back at the first decade of the Women’s Foodservice Forum.

• Offer deals via the Internet.

• Get the Beach Boys to write and record your jingle, with your CEO and COO singing backup—
as Sonic did.

• Starbucks makes a move on foodservice.

• One to Watch: Panera Bread with 143 restaurants.

• One to Watch: Firehouse Subs with 29 locations.

• Try in-car transponders for cashless payments at the drive thru.

• The FDA approves new rules to allow for meat irradiation. The question is, would customers eat it? The answer turned out to be no. 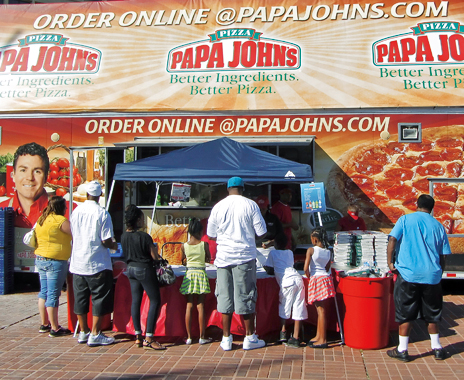 • Use a sampling truck to appeal to customers and potential franchisees in new markets.

• Recruit new employees via the Internet.

• Have a great website—you might get a net@ward from QSR.

• Social investing doesn’t have a chance unless a company’s chief executive gives it the nod.

• Look at the military as the next big nontraditional market.

• Barry Gibbons’ absurd yet pointed advice on being a better CEO: “Deliberately sit down and forget somebody every day.”

• An obesity lawsuit has the industry thinking seriously about consumer health concerns and what they mean to the business.

• “Fast food ain’t the real problem. [Author Eric] Schlosser’s the real problem—inasmuch as he exists on the planet with six billion peers. Their aspirations and needs create demand forces that are supplied by people. As such they are occasionally subject to greed and abuse, and are occasionally out of control.”—columnist Barry Gibbons responds to Fast Food Nation

• “If you really wanted to get crazy, how about a crunchy taco in a Cool Ranch Dorito shell?” —then-editor Greg Sanders 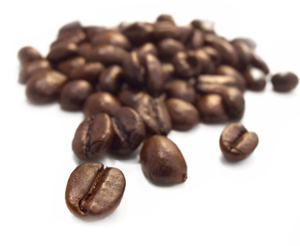 • Take a look at gourmet coffee.

• Why no crepes in quick service?

• Pay staff either minimum wage or a shared pool of money equivalent to 25 percent of monthly net sales, whichever is higher.

• If you’ve run into trouble, you’re probably not paying enough attention to your menu.

• Model your customer service on Disney, where guests are on vacation.

• Pick one sense and find a way to affect it in the first 10 seconds of a guest’s visit.

• Do more with soup.

• McDonald’s quietly tests its McCafé concept for the second time in the U.S. (The first was in Chicago in 2001, which closed down after a year.)

• If your time and resources are only set up to defend your brand, eventually you will lose.

• Restaurants jump onboard the low-carb bandwagon. 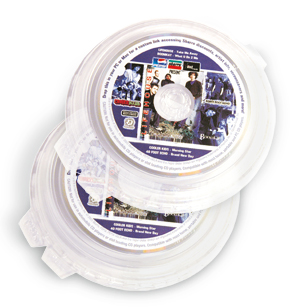 • Sbarro’s CD-ROMs-on-drink-cups initiative “the wave of the future.”

• Younger Americans flock to the Web for everything from concert tickets to finding a date.

• The Drive View window system showcases restaurants’ prep process in the drive thru.

• Columnist T.J. Schier: Every store should own a television, DVD player, personal computer, and CD-ROM drive.

• Ultrasonic sound waves and smell-secreting menuboards are drive-thru tech of the future.

• Fast-casual momentum appears to be waning.

• Angus beef gives brands like Back Yard Burgers and CKE an early claim to the better-burger category.

• Seventy-one percent of readers say there is no room for alcohol in quick service.

• With Moe’s, Mama Fu’s, and Planet Smoothie in its portfolio, Raving Brands is on a roll. 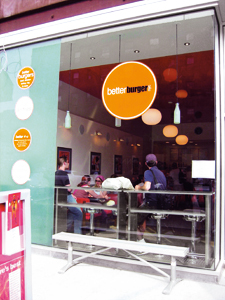 • Fading low-carb craze proves that operators must give customers what they want.

• Cupcakes are big on profit.

• McDonald’s makes it known that Chipotle is for sale.

• Now that the low-carb trend is dead, dieters turn their attentions to trans fats.

• The popular theory: Gen Y members “don’t give a damn.”

• Magic Johnson shares his plans for his quick-service restaurant portfolio.

• Talk bubbles up that Popeyes Chicken & Biscuits might change its name.

• Earl of Sandwich aims to be the “Starbucks of sandwiches.”

• McDonald’s gets transparent about its supply chain.

• iPods are a good training manager.

• Eighty-nine percent of consumers willing to sacrifice speed in the drive thru for quality.

• McDonald’s encourages customers to sit and stay a while with in-store WiFi.

• Blogging is the online community you can’t miss out on.

•The inaugural green issue predicts that within 10 years, eco-friendly companies would be rewarded with customer loyalty and lower operating costs.

• The Middle East is “the most talked about growth market.”

• Columnist Steve Weiss: YouTube is a tool that brands should “sit out.” 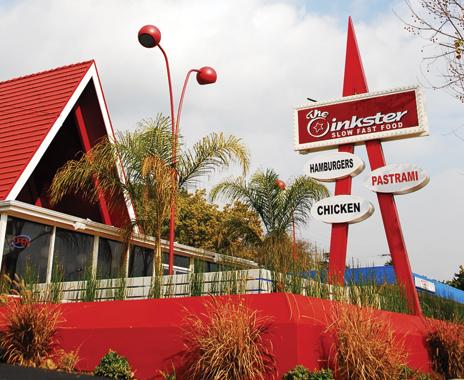 • The Hartman Group’s Laurie Demeritt: The movement toward fresh foods will have a “profound and lasting” effect on consumer eating habits.

• Mexican frozen juice bars, paletas, could be the next concept trend.

• Red Mango shows up stateside, though at first without plans to franchise.

• The gluten-free trend takes off.

• The industry fights back against menu labeling as legislative pressures ramp up.

• McDonald’s “bucked the downward financial trend” at a time “when competitors such as Starbucks [were] closing stores and reining in growth.”

• Social media a tool that can enhance a corporate identity and appeal to younger audiences.

• In thick of recession, 84 percent of consumers say they eat at home to save money.

• Sakae Sushi looks to become “The McDonald’s of Sushi.”

• Food waste is an important component to brands’ green initiatives. 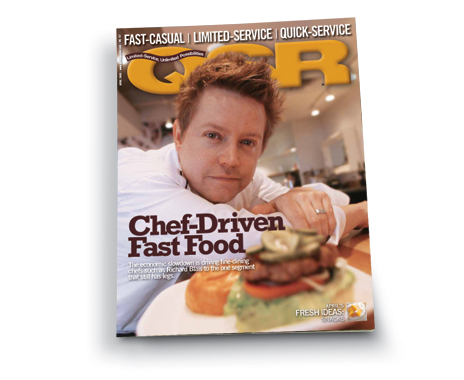 • Green certifications like LEED are a badge of honor for brands.

• Video streaming on packaging could be the next big thing in branding.

• Up-and-coming snacks include yogurt with pomegranate kernels, pita chips with hummus, and popcorn mixed or flavored with dark chocolate.

• Sodium is the nation’s next big health concern.

• Franchisees express concern over the Employee Free Choice Act of 2009.

• Gluten-free desserts are a fresh idea.

• Predictions for 2030 include LED technology woven into uniform fabrics and brand-specific mobile apps.

• Coca-Cola Freestyle makes waves leading up to its 2010 rollout.

• Salsarita’s CEO Paul Mangiamele: A fast-casual drive thru would rob the customers of the store’s hospitality.

• Brands face backlash from consumers for “greenwashing,” or abusing the sustainability movement’s popularity.

• Foursquare is the newest social network to invest in.

• The industry braces for the Food Safety Modernization Act. 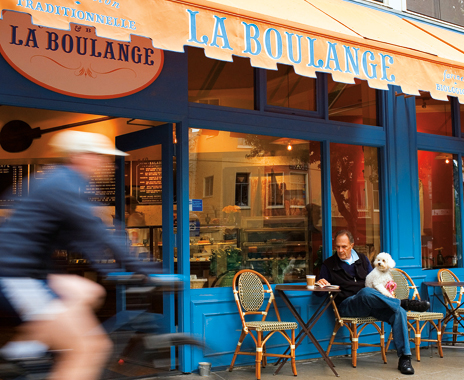 • One To Watch: La Boulange.

• The Millennial generation takes over the industry conversation.

• Red Mango is One to Watch.

• Marriott throws its weight into the fast-casual restaurant game with The Bistro.

• “Top Chef” star Spike Mendelsohn invests in the fast-casual industry with Good Stuff Eatery and We, the Pizza.

• Asian quick-service concepts outgrow the rest of the industry.

• Speed of service slows down in Drive-Thru Performance Study.

• Domino’s and Captain D’s among brands to redesign stores to compete with fast casuals. 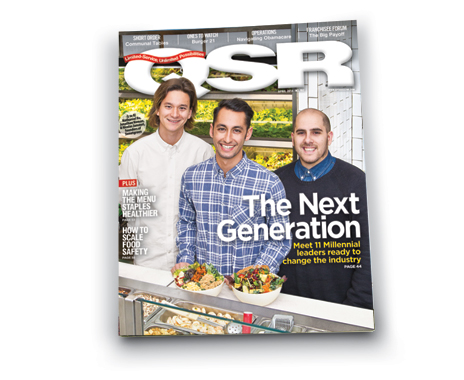