The best large, medium, and small markets for your unit expansion.

Miami has recovered from the Great Recession and now offers quick-serve operators plenty of growth potential.

If this year’s Growth 40 report is any indication, plenty of quick-service brands will soon be following in the footsteps of basketball superstar LeBron James and taking their talents to South Beach.

Conducted by Port Washington, New York–based foodservice research firm The NPD Group for the second consecutive year, the Growth 40 report investigates population projections, quick-service unit density, and traffic gains at quick-service eateries in hundreds of markets across the U.S. This year, the Growth 40 report embraced new demographic data pulled from the 2010 Census, fresh figures that sparked some compelling movement in the rankings.

Last year, for instance, Miami sat outside the top 10 among large markets, hampered by a paltry 1 percent projected jump in population between 2011 and 2016. The revised population forecasts, specifically the metro area’s projected 10 percent population gain by 2018, catapulted Miami to the top.

“With the current population updates, some growth rates turned out higher than expected,” says Greg Starzynski, director of foodservice project management with NPD Group. “With better data and newer information added to the model, changes resulted.”

With towering residential skyscrapers sitting vacant and with rising unemployment, Miami was, at a time, a poster child for the recession’s ills. Today, however, Miami has a different story to tell: a strengthening economy, an ever-expanding tourism clientele, and an influx of new residents. As a result, the NPD Group predicts Miami will see a 16 percent jump in quick-service traffic over the next five years.

“We were hit hard by the financial meltdown, but there’s fresh money in the city now,” says Ghazi Hajj, CEO of Miami-based GrilliT, which has three stores in the Miami market and looks to open as many as 20 additional Miami-area units over the next five years.

With its anticipated 10 percent jump in population, a rate bested only by Dallas among large markets, Miami’s post-recession resurrection is well underway. Strong job growth is driving Miami’s renaissance. From August 2012 to August 2013, Miami’s unemployment rate dropped from 8.9 to 7.3 percent, a tally that puts the area on par with the national average.

“When we see population increasing and unemployment heading down, those are very positive signs for a market,” says Lee Zimmerman, director of new store development for Stevi B’s Pizza, a concept targeting Miami-area expansion.

Miami has more to boast about—namely, a quick-service unit density number of 95 restaurants per 100,000 residents, which is also second among large markets.

With four Miami stores opened over the last two years and as many as 15 slated to open over the next four years, Corner Bakery Café is one of many brands bullish on the city. Corner Bakery president Gary Price is encouraged by Miami’s rebounding real estate market and an influx of upper-income residents.

“We believe Miami’s fully rebounded from the economic hit and has a lot of space to grow,” says Price, whose 160-unit concept is looking to double its national unit count over the next three years. 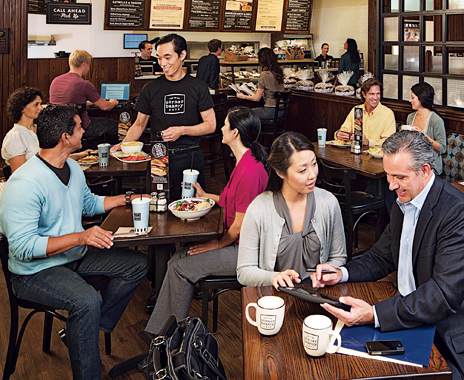 Room to grow is precisely what continues attracting Corner Bakery and others to the Growth 40’s large-market runner-up, Salt Lake City. Utah’s biggest metro market claims a quick-service density number of 93, the most favorable figure among the Growth 40’s top 10 large markets. By 2018, Salt Lake City’s population is expected to jump 9 percent, while the NPD Group forecasts a 12 percent rise in quick-service traffic.

The appeal in the growing population base, expanding jobs and housing market, and business-friendly environment in Salt Lake City is simply too good to ignore, Price says, adding that Corner Bakery will open three new Salt Lake City restaurants in 2014.

Behind Miami and Salt Lake City, the nation’s capital continues its run near the top of the Growth 40 rankings. Bolstered by a projected 10 percent population increase, Washington, D.C., follows its runner-up spot on last year’s list with a third-place finish this year.

While no market is recession-proof, the government’s presence in D.C. provides the metro area rare stability. D.C. also holds the fifth-highest per capita income in the U.S., according to the U.S. Bureau of Economic Analysis.

Last year’s large-market leader, Denver, placed fourth in 2013. Though Denver’s population continues to rise, so, too, does quick-service competition in the marketplace, a reality that curtails some brands’ entry into the Mile High market. According to NPD Group data, Denver’s quick-service unit density of 118 trails only Seattle as the worst among the top 10 large markets. Denver also holds the runner-up spot among all U.S. markets when it comes to the number of fast-casual chain units per resident. At 12.76 fast-casual chain restaurants per 100,000 residents, Denver is at more than two-and-a-half times the national average.

Texas continues its run as a powerful economic force attracting restaurant brands and other businesses. In this year’s Growth 40, four of the top seven medium-sized markets call the Lone Star State home, including the top two, Austin and El Paso.

Austin benefits from a diverse economy that includes the medical, technology, legal, financial, and government fields, as well as the 52,000-student University of Texas campus.

“There are a lot of professional workers here, and it seems to be growing by the minute,” says Gregorio, who relocated Camille’s corporate office from Corpus Christi, Texas, to Austin in 2012.

Wisconsin-based Erbert & Gerbert’s Sandwich Shop, which has 75 units across nine states, has targeted Austin as a priority market. “There’s a flurry of people and energy around Austin that makes it a place we want to be,” says Eric Wolfe, Erbert & Gerbert’s CEO.

But Austin is a place many others want to be, as well, thereby heightening quick-service competition in an already bustling market. Its quick-service unit density figure, 108, makes Austin the third-most saturated area among the Growth 40’s top 15 medium-sized markets. With so many restaurants wanting a piece of Austin, occupancy costs could become unrealistic for some quick serves.

“Those occupancy costs are something we’re keeping an eye on, because the numbers need to make sense for our franchise partners,” Wolfe says.

“Austin has a climate in which you’re going to be consistently challenged to innovate and evolve,” Gregorio says. “When you have so many others looking to capture visits, you better be at your best every single day.”

While Austin and some other Texas markets get most of the national attention, El Paso has slowly built its reputation as a must-investigate locale for growth-minded quick serves. With a projected 11 percent jump in population and a quick-service unit density count of 88.9, El Paso holds plenty of appeal. The city’s standing as an overlooked market, however, is fading—and fading fast. In recent years, high-performing brands like Chipotle, Jason’s Deli, Dunkin’ Donuts, and Five Guys have opened El Paso–area stores. Corner Bakery’s Price says his brand is hunting for a fifth store site in the area.

“El Paso might not be Austin, but it’s not off the radar anymore, either,” Price says.

Fresno is another medium-sized market long playing in the shadows of its state’s more established cities. Like El Paso, Fresno’s quick-service unit density figure also hovers near a favorable 88.

A growing economic hub for the San Joaquin Valley and conveniently located between northern and southern California, Fresno enjoys a diversifying economy with an expanding residential and commercial base, as well as more than two million local residents.

Though California imposes a challenging regulatory environment for restaurateurs, headlined by a $10 minimum wage set to take effect in 2016, Price says that won’t deter Corner Bakery from opening units in Fresno or any other market throughout the state.

“It’s a tough regulatory environment in California, but we all face it,” he says. “As we assess new markets for growth, we look at the entire picture … and when you do that with Fresno, you find plenty to like.”

Count Steve Rafferty, senior director of franchising for Dunkin’ Brands, among the group of quick-service leaders smitten with Palm Springs, California. In the coming years, Dunkin’ looks to bring up to 1,000 units to California, many of which will undoubtedly call Palm Springs home.

“We think Palm Springs is an ideal spot to build, as much for its own growth as the fact that it’s a destination for folks in other key California markets, like L.A. and San Diego,” Rafferty says.

Among small markets, Palm Springs surged from 10th place in last year’s rankings to the top of the list in 2013. Fueled by a projected 16 percent rise in quick-service traffic and an 11 percent jump in population over the next five years, Palm Springs presents intriguing prospects for growing quick-service brands. 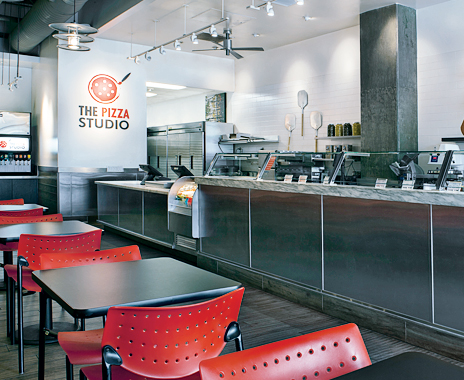 Samit Varma, CEO of The Pizza Studio, an upstart Los Angeles–based fast casual with more than 125 units in its development pipeline, says restaurant leaders will find plenty to like about Palm Springs. The area is known to attract high-income earners from Southern California seeking a desert home, as well as tourists seeking the area’s near-constant sunshine.

“In Palm Springs, you’ll find a high-end demographic of people who appreciate quality food,” Varma says, noting that Palm Springs has particular opportunity for nontraditional units in its numerous local resorts and casinos, as well as inside the Palm Springs International Airport.

Nona Watson, CEO of the Palm Springs Chamber of Commerce, says the area is enjoying a renaissance, with hotels and commercial developments moving in, record attendance at its civic events, and new population growth. There’s also a good bit of redevelopment, including an expansive downtown revitalization project in which a long-vacant mall property is being converted into four city blocks of new streets, stores, hotels, and restaurants. City leaders hope to have the infrastructure in place for that project sometime in early 2014.

But, like all of its California siblings on the Growth 40—San Diego, Fresno, El Centro, Santa Barbara, and Bakersfield—Palm Springs faces a challenging regulatory environment. It’s one Dunkin’ plans to overcome by strategically selecting franchise partners.

“We’ll align ourselves with people familiar with this business climate and who have figured out the complexities of running a business in California,” Rafferty says.

After claiming the top spot in 2012 among small markets, the Yuma, Arizona–El Centro, California, area falls to the runner-up position in 2013. With a quick-service unit density count of 76 (the lowest among all markets in this year’s Growth 40 report) and a population expected to jump 7 percent by 2018, Yuma continues to shed its long-held label as a sleepy agricultural outpost.

Last November, Togo’s announced its move into the Yuma market with the development of two stores in Yuma and one in El Centro. Togo’s already has a presence in San Diego and Phoenix, Togo’s CEO Tony Gioia says, and the Yuma market’s presence along Interstate 8, which connects those two Western cities, gives Togo’s an opportunity to fill in some important space and extend its brand. Even more, it can do so at favorable labor and property costs.

“This market is new ground for us, but we see the potential for even more units in the years ahead,” Gioia says.

Wilmington, North Carolina, captured the third spot on the small-market list, followed by oil-rich Odessa–Midland, Texas, which claims the nation’s highest per capita income at $83,049.

About The NPD Group

See the top 40 markets by population on the map below: