Classic Chain Pizza Inn Gets in the Quick-Service Game

The 150-unit brand's new Express concept is a perfect fit for C-stores, but the possibilities don't end there.
Growth | January 2018 | Danny Klein

Pizza Inn believes it can play a major role in the C-store arena.

You can’t fault any brand for wanting a piece of the C-store pie. The industry has ballooned into a $575 billion juggernaut, according to The Association for Convenience and Fuel Retailing. The amount of locations increased 0.2 percent from 2016 to 154,535, and 70 percent of sales were attributed to in-store purchases. Data from NPD showed that consumers made nearly 4.9 billion visits to C-stores for prepared meals and snacks in the year ending May 2016, representing a 15 percent increase over 2010.

But here’s a lesser publicized reality: While standouts like Sheetz, Cumberland Farms, and Wawa have grown to the point where they can produce their own products and branding, the majority of C-store locations still rely on outside labels to drive food and beverage sales. In other terms, amid all the rapid growth, there is still room for the majority of the industry to upgrade.

Bob Bafundo, president of Dallas-based Rave Restaurant Group’s Pizza Inn concept, believes his brand can heed the challenge. “We feel like we can present a high-quality pizza product in a venue where maybe the customer expectations aren’t very high for quality,” he says. “If we can exceed those expectations and do a small menu very consistently well, we think we’re going to offer operators a great value and a great way to drive profitability.” 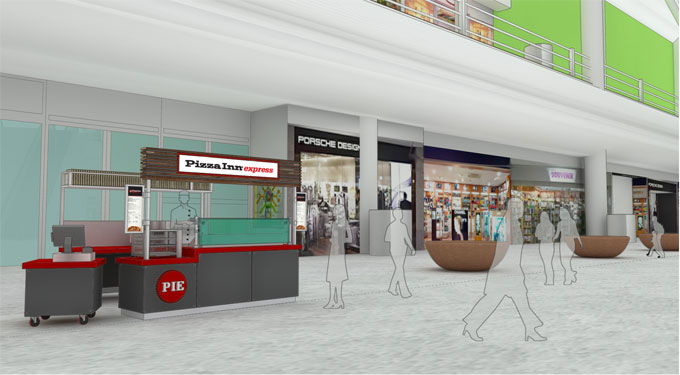 Pizza Inn, founded in 1958 and known for its buffet concept, especially in the southeastern part of the country, unveiled a new prototype Express concept in December. Labeled Pizza Inn Express, or PIE for short, the 50–100-square-foot model is geared toward convenience stores, but offers a lot of added flexibility.

It allows customers to order and pay at a kiosk for grab-and-go, or pick up food at a designated spot. Bafundo says there are currently three prototypes—one for a travel plaza, one for an airport, and another that can be retrofitted, giving operators a chance to modify existing spaces to include a Pizza Inn Express.

Bafundo says the 150-unit brand began the discussion by asking, “How does this model fit into what’s going on right now with c-stores and their upgrading food environments.”

Next: “How can Pizza Inn play a bigger role?”

The chain looked at investment costs, and how they could lower them to allow operators a chance to get into the business easier. “We think the kiosk format has provided that,” he says. “It gives them the ability to get in quickly and also the ability to adjust as times change and facilities change going forward.”

The operator flexibility equation is playing a key role. Not only does this format open the door, it also weaves threads between markets and business models. An existing operator can drop an Express store into a new trade area, for example, and then, based on its performance, follow up with a buffet unit later on, Bafundo says.

“I think that’s the way the industry is headed. You need to be a little bit more nimble, a little bit more creative and entrepreneurial in terms of site selection,” he says. “That’s such a critical decision an operator makes when they go in.”

Pizza Inn reported same-store sales increases of 1.4 percent domestically in the first quarter versus the prior-year period. There are 60 international units.

Rave Restaurant Group CEO Scott Crane said in a statement that the new express concept could be a “game-changer for Pizza Inn.”

“We're already seeing great interest from existing and potential franchisees who see this model as a new way to serve customers the same iconic, quality pizza they have come to expect, but in a faster setting,” he said. Rave also operates fast casual Pie Five.

The Express unit, Bafundo says, features a streamlined menu inspired by brands like Raising Cane’s and some of the upscale burger concepts. “We tried to make it as simple as possible. And there’s real focus on producing less product more frequently so it’s always fresh and always high quality,” he says.

Bafundo says the concept has the potential to expand to shopping centers, stadium, universities, and more.