How to Win in Retail

Most licensing relationships fail. So why are more quick-serve brands jumping into the retail space?

Starbucks’ market saturation has become a pop-culture touchstone. The chain has more than 17,000 retail locations worldwide, and a sizable majority of those are in the U.S. More than a few jokes have sprouted up around the seeming omnipresence of the Starbucks brand.

But Starbucks is about to get even bigger. By purchasing the Evolution Fresh brand of juice toward the end of 2011, it’s making a major step in the retail space. Not only is it replacing Naked Juice in its stores with its own product, but it’s also taking the juice to grocery-store aisles in hopes of capturing a slice of the $5 billion refrigerated juice market.

The Evolution Fresh juices join an already impressive stable of Starbucks grocery products. Its Frappuccinos, Doubleshots, and other ready-to-drink beverages energize everyone from busy moms to college students pulling all-nighters. And, after a recent redesign of its bagged coffee packaging and the introduction of the lighter Blonde roast, Starbucks is only going to continue increasing its footprint at retail locations.

Licensing for retail is big business, as many quick-serve brands have already discovered. Taco Bell and Kraft teamed up to produce a line of taco, nacho, and fajita kits for eating at home. The Dunkin' Donuts Original Blend, which is produced and distributed by the J.M. Smucker Company, beat out all rivals to become the No. 1 packaged coffee stock-keeping unit (SKU) in grocery stores. TCBY’s new Greek frozen yogurt was on shelves nearly as soon as it was in stores. Then there’s Burger King, which famously released a line of T-shirts and a meat-scented cologne.

While most brands view licensing as a mere offshoot of their core product, there are opportunities to take it even further. Gary Stibel, founder and CEO of the New England Consulting Group, says there’s a rich history of restaurants moving into the retail space. Some have performed so strongly that it’s become their main focus.

“Historically, the best [retail] brand of all time is probably Stouffer’s,” Stibel says. “But you may not realize Stouffer’s was ever a restaurant.”

When Stouffer’s started in 1922, it was a quick-serve dairy stand that offered customers free crackers as a perk with their buttermilk. That small stand expanded into a full-service restaurant, then grew to the point that the company began opening other locations. In the ’50s, Stouffer’s began producing frozen foods, a side of the business that grew quickly and eventually overtook the restaurants. Today, the company (which is owned by Nestlé) is the leading producer of frozen foods in the U.S., while the restaurants have long since closed.

Ben & Jerry’s is another quick-serve brand known more for retail than for restaurants. Though the company started as an ice cream parlor and runs Scoop Shops around the world, it decided early in its history that it wanted broader distribution. So Ben & Jerry’s partnered with ice cream maker Dreyer’s to get its brand to market.

“When Ben & Jerry’s wanted to go in the grocery stores, they hired—it wasn’t a license—Dreyer’s to be their distribution agent,” Stibel says. “There are several ways to get to retail if you’re a restaurant.” 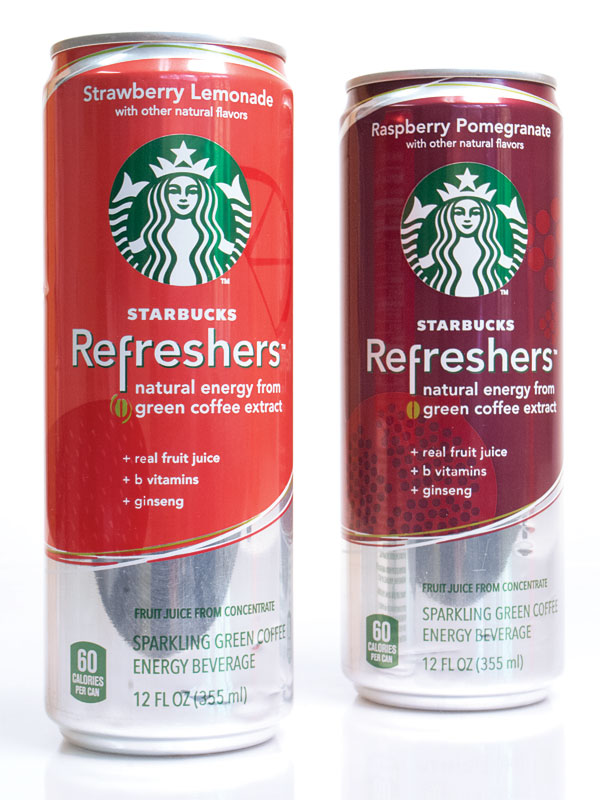 There are several reasons companies choose to develop retail products, one of the biggest being the financial benefits. Jeff Hansberry, president of Starbucks Channel Development and Seattle’s Best Coffee, says in an e-mail to QSR that even a chain of Starbucks’ size has yet to capture much of an enormous global market.

“Today, Starbucks captures only a small portion of the $100 billion coffee, tea, and ready-to-drink beverage market globally,” Hansberry says. “We are working to build a greater share of that global opportunity with our [consumer packaged goods] business by growing across channels, categories, and countries where our products are sold.”

That strategy hinges on finding new markets. Vending machines, grocery and convenience stores, gas stations, and other retail outlets can be located in places quick-serve brands can not and offer new opportunities for growth.

“One of the key differentiators of the Starbucks brand is that we are uniquely positioned to serve our customers wherever they want us,” Hansberry says in his e-mail.

Julie Washington, chief brand officer for Jamba Juice, says finding new channels of distribution is the raison d’etre for the company’s retail line. The chain has only 750 stores, but more than 30,000 points of distribution for its retail products.

“How do we reach more consumers across a larger terrain here in the U.S.?” Washington says. “We meet consumers where they are.” Befitting Jamba Juice’s healthy image, the company offers a line of at-home smoothie kits with flavors similar to the in-store smoothies, along with completely separate products like trail mix and fruit cups.

Steve Sklar is senior vice president of marketing for Inventure Foods, which produces and distributes some products for Jamba, as well as for T.G.I. Friday’s and Burger King. He says to-go snacks like Burger King–branded Onion Rings or Hot Fries bring the products to new audiences. “Basically you can sell snacks anywhere,” Sklar says. “If a product works, we’re going to go to all the channels of distribution.”

Expanding into consumer goods also offers brands an additional chance for branding and marketing. While it takes significant capital to open a restaurant in a new area, distributors are easily able to get branded consumer goods on store shelves around the country. For example, though Dunkin’ Donuts is concentrated mostly on the East Coast, its popular coffee is sold in grocery stores even in Starbucks’ hometown of Seattle.

In spite of the strong opportunities presented by retail, though, many chains are not involved. Stibel says with the exception of Taco Bell, Starbucks, and Jamba Juice, most quick serves have not done a good job expanding in this direction.

Perhaps one reason for that is that entering retail can be difficult. Licensing arrangements can be complicated, as everything from marketing to R&D to finances must be coordinated in a way that benefits both parties.

“The key is choosing a partner,” Stibel says. “Everybody thinks most licenses succeed—it’s absolutely the opposite. The vast majority of all licensing arrangements or attempts to enter [consumer packaged goods] by restaurants fail.”

Even long-standing relationships can grow sour. Starbucks and Kraft had a very ugly public split in 2011 after the coffee giant claimed that the distributor wasn’t doing enough to promote its products. Kraft sued to prevent the 13-year partnership from dissolving, but was ultimately unsuccessful. Now the two companies compete for shelf space, with Kraft’s Gevalia and Maxwell House going up against Starbucks’ offerings.

Sklar says the best relationships happen when both parties find a good fit. Inventure Foods often goes after companies that it thinks will work with its existing offerings.

“We prefer to pick a category that we want to go after,” Sklar says. “We will approach a company and try to get them to do licensing.”

The Jamba Juice deal came up out of necessity. After acquiring a berry company, Inventure Foods was looking for something to do with the fruit. The leadership team came up with the idea of doing smoothies, then searched out a company with a national reach. The R&D teams at both companies cooperated to create products that were similar to what Jamba Juice sold in its stores, and the partnership flourished.

But it’s not always the retail company that makes the first move. Inventure Foods was approached by a licensing broker working for Burger King, which had selected Inventure Foods after seeing its work with T.G.I. Friday’s. Since Inventure Foods had already been working on a ketchup and fry product, the two sides were able to come to a fast agreement.

“Burger King was a great company to work with,” Sklar says. “We actually got that deal set up and done with very quickly.”

How fast a product gets to the retail market is often a question of research and development. Jamba Juice works with several companies for its various products, and Washington says the fastest products are generally those that take the least research.

“You sort of start where you can get your opportunities,” Washington says. “Apparel is much faster. T-shirts are a little easier than actually coming up with a trail mix formulation.” 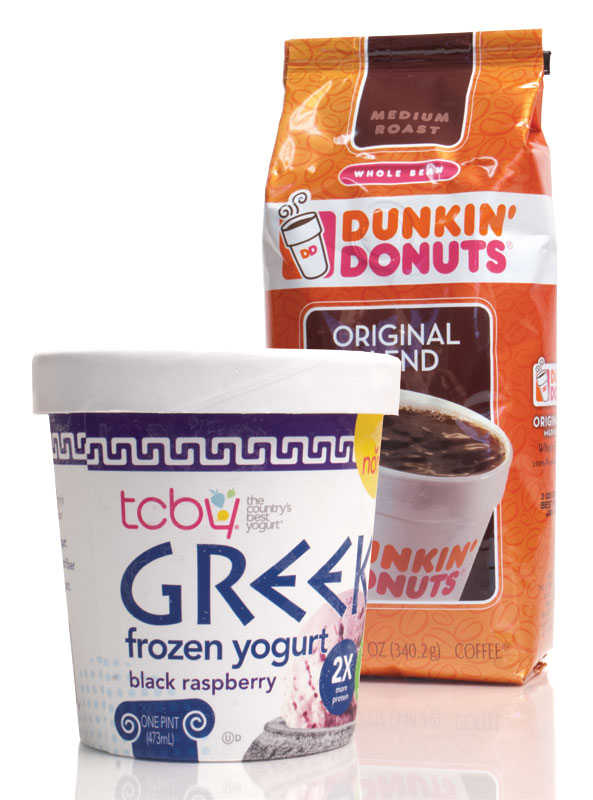 The Dunkin’ Donuts Original Blend is the No. 1 packaged coffee SKU at groceries; TCBY’s fro-yo pints are very similar to the brands’ in-store products.

The size of the companies involved also makes a difference. While entrepreneurs are often very fast and nimble, larger firms don’t move as quickly. Washington says patience pays when it comes to dealing with big companies. “Nestlé is the largest licensee that we have,” Washington says. “It’s a multibillion-dollar company, so there are a lot of gates you have to go through. It took a lot longer than some of the others.”

Even after several back-and-forth rounds of product development, delays can creep in. Supermarkets often replace products in cycles, and if brands miss a window, they have to wait for the next reset time. The upshot of all this, the experts say, is that marketing takes place on a slower timetable. With all the factors figured in, it can take between several months to more than a year to bring a product from concept to shelf. While quick serves can roll out LTOs based on a short-term movie tie-in or a particular season, retail products must be designed with a long-term perspective.

It’s also important to consider how the product will be produced and distributed, Stibel says. He likens the process to a relationship between a general contractor and a subcontractor. Some quick serves will maintain more control over production and research and only partner with another company to get their product to the stores. Others will cede most of the process to the partner, only maintaining the rights of final approval.

A final consideration when entering the retail space is the brand itself. It’s important for quick serves to come up with standards for their image. Jamba Juice works with several different licensees, but it wants each product to look like it came from the same company.

“We have some style guidelines,” Washington says. “Even though it’s many different licensees, it should look like it comes from the same brand and manufacturer. “

Sklar says that while most larger companies already have their brand standards in place, smaller companies sometimes operate with a “we’ll know it when we see it” type of approach. But since both companies want to produce a product that looks like it came from the licensor, it’s best to just have things planned out upfront, he says.

“Once their system is set up, then it’s smooth, but getting the system set up is a challenge,” Sklar says. “I would encourage them to think about how they want their brand portrayed in the market, to have some kind of continuity in their look and packaging.”

While none of the brands interviewed would provide exact sales figures, Washington says the total percentage of business from Jamba Juice’s retail products is low. Even so, retail remains a compelling opportunity for brands to get new customers, expand their reach, and reinforce their brand.

“I think it’s very important for you to know your brand and your brand’s strength,” Washington says. “The shelves are full. You have to have a clear point of difference that’s meaningful to the retailer.”