Are You Sure About What You’re Worth?

Compensation for quick-serve executives is decided on a company-by-company basis, but experts agree CEOs should make the decision that’s best for the brand.

The recession forced many quick-serve companies to make staff and cost cutbacks. New research shows that salary compensation for executives also took a hit in the economic downturn, drawing to the spotlight the subject of what kind of compensation executives should be awarded in the first place.

According to recently released data, compensation for corporate-level positions at franchise companies decreased by 7 percent last year. The biggest reduction was for department heads, who saw compensation drop an average of 12 percent. The smallest reduction affected managers, who averaged only a 1 percent decrease. For c-suite members, the average reduction was also 7 percent.

“It seems like it’s probably because of economic conditions,” says Miroslava Marinova, a senior research analyst for FRANdata, which conducted the research. “Franchises are coping with the situation by reducing compensation but maintaining the same level of employees they’ve had in previous years.”

While CEO compensation was not analyzed separately from that of other members of the c-suite, the study did show that chief executives in foodservice earn 18 percent less than their counterparts in nonfood-related industries. Other factors that were shown to affect compensation include the location of the company’s headquarters and the size of the franchise system. Brands based in cities had higher-paid executives, as did concepts with more than 250 units.

Although the research identified these trends, experts say each brand’s compensation strategy is unique.

“I don’t know what best practices would be because that’s so subjective,” says Darren Tristano, executive vice president of Technomic. “In my opinion, the performance-based plan is probably the ideal. The CEO should be rewarded, incentivized, and penalized based on how well the company does.”

When Anthony Leone opened the first Energy Kitchen in 2000, that was the strategy he and his co-owner, Randy Schechter, used.

“We would make a salary and then take the profit at the end of the month based off the percentages Randy and I owned,” he says.

But when Vitaminwater creator Mike Repole joined the company, Energy Kitchen went into what Leone calls “aggressive growth mode.” Leone quickly realized that the compensation strategy had to change to accommodate the company’s new expansion strategy.

“Now everyone in the corporate structure is on a set salary so we can reinvest all of the profits back into the company to build the brand,” he says. “This also helps us to budget better because we know all of our expenses up front.” 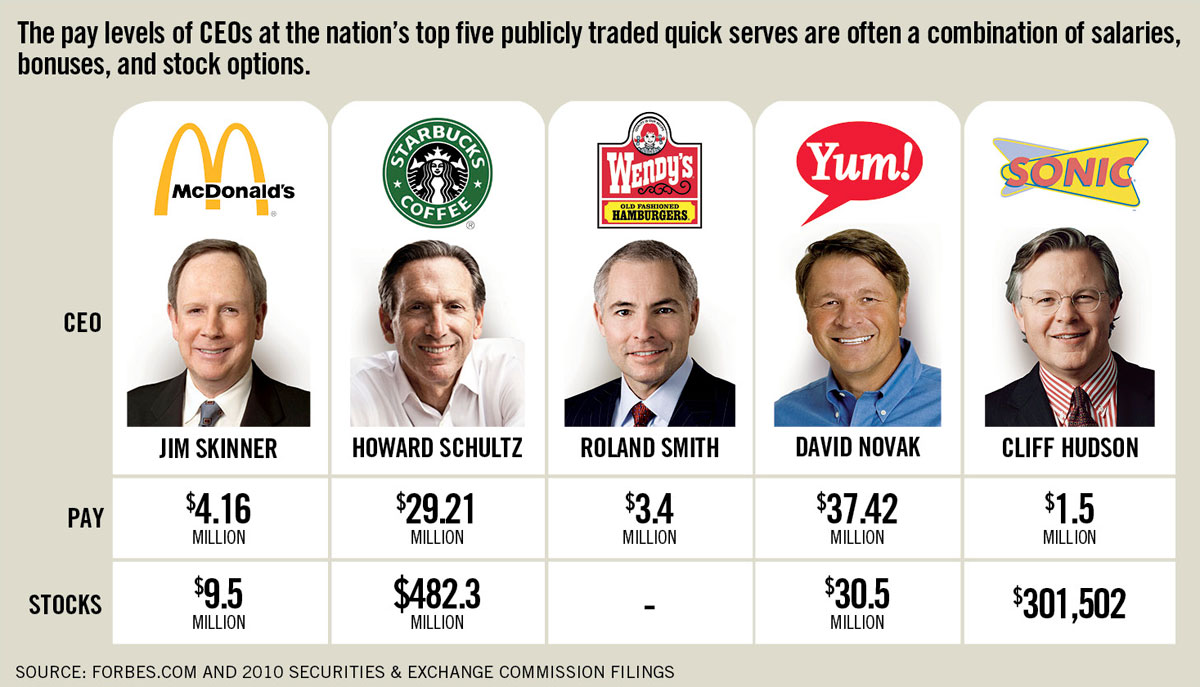 Leone says the new system has an additional advantage: It helps get everyone who works for Energy Kitchen corporate in the team spirit.

But some CEOs feel that having such a high level of disparity between their compensation and their c-suite’s compensation can create divisions among a brand’s leadership. Take George Michel, CEO and president of Boston Market since October 2010.

“At one point [when I was with Burger King Canada], I negotiated down my raise during my annual performance review because I didn’t feel I should be getting that much more than the people who reported to me,” Michel says. While the person Michel reported to at the time was shocked by his response, Michel stood by his decision; he didn’t want to create any separation between himself and the rest of the group.

The issue is particularly relevant now that cutbacks are often necessary because of the recession.

“Whether a CEO should take a cut in salary because the market conditions aren’t as good is a personal choice,” Tristano says. “You can argue that both ways, that he should or he shouldn’t.”

In Tristano’s opinion, though, the CEO should lead by example.

“If you’re a true leader, then you’re the first one to say, ‘I’m going to take a pay cut to support this organization,’” he says. “It’s very hard to put ego aside when it comes down to how much you’re worth—we all know we’re worth more than we’re paid. You have to approach it with an open mind, you have to approach it unselfishly, and you have to do what you think is the best thing for the brand and not just for the individual.”

“If you’re a true leader, then you’re the first one to say, ‘I’m going to take a pay cut to support this organization.’”

Or, as Michel says, “You’ve got to walk the talk.”

“The fact that I treat myself the same way that I treat my c-suite contributes significantly to how people perceive my leadership style, I’m sure,” he says.

Another way Michel tries to set a good example with Boston Market is by emphasizing transparency in compensation plans.

“I always believe, especially with short-term incentives, that you need to be absolutely clear about the benchmarks and the results you’re looking for, as well as how they’re going to be measured,” he says. “The best bonus plan is one where the employee or the executive can at the end of the year more or less write an invoice for his or her bonus. It’s very clear and understood, as opposed to being subjective or being fake.”

This, along with conducting the proper research to determine industry and job standards, helps ensure that members of a c-suite will be satisfied with their compensation.

“When I review performance and we look at salary adjustments, usually we give the individual 24–48 hours to reflect on it and come back and sign the agreement or the change in status or compensation levels,” Michel says. “Providing them with that time is critically important. It allows the person to digest the information and make sure whatever they’re being offered is what they think is fair.”

Michel doesn’t plan to change his philosophy on compensation any time soon; he says it has worked well for him throughout his career.

“Having great strategies, having great discussion, and having clarity really lends to   people feeling great about their compensation,” he says. “I’ve never had a reason to go back and adjust someone’s salary so far.”