Burger King went off the common Super Bowl track with its new promotion.

For an ad that didn’t say much, and hardly made any actual noise, Burger King’s Andy Warhol spot has sure fueled a lot of post-Super Bowl buzz. Unlike many of the burger chain’s recent marketing efforts, this promotion was defined by its subdued nature, not trolling prowess. Burger King called it a “nearly silent film” 37 years in the making. The original 4-minute clip was created by Swedish director Jorgen Leth in 1982 as a part of the film’s “66 Scenes from America.” The aim then being, this was America’s most iconic artist portrayed feasting on America’s Favorite Burger, in Burger King’s own terms.

“The Warhol ad did make for one of the most arresting spots of the night, with silence and mystery cutting against the game’s loudness. And it’d certainly be hard to argue impropriety in a fast-food chain decontextualizing and commodifying a pop-art adman who famously admired Madison Avenue’s talents for … decontextualization and commodification,” The Atlantic wrote.

Slate called it the Super Bowl’s best ad. Then, on the other side, artnet said it succeeded in “alienating pretty much everybody.” Warhol biographer Blake Gopnik said Burger King missed the point by not showing him eating the burger from beginning to end, as originally intended (although you can do this online). There’s even an article out saying Warhol preferred McDonald’s.

Burger King said the spot was meant to break through the traditional Super Bowl cycle of explosions, slapstick jokes, and celebrities, with “an almost silent, yet powerful work of art.”

“Beyond the simplicity of the spot, it has a deeper meaning. It is also a testament to one of Warhol’s most iconic quotes about the greatness of the United States: ‘What's great about this country is that America started the tradition where the richest consumers buy essentially the same things as the poorest,’” Burger King said.

“What we love about Andy is what he represents as an art icon and his message about the democratization of art,” Marcelo Pascoa, head of global marketing Burger King, said in a statement. “Just like his art, America’s Favorite Burger, the Whopper is for everyone. Our commercial is an invitation for everyone in America to Eat Like Andy.”

On-demand user insights platform Alpha took a data-driven dive into the commercial to see what consumers thought. The first big note: 65 percent of nearly 400 people who saw the ad didn’t know who Warhol was. So let’s see where this takes us. 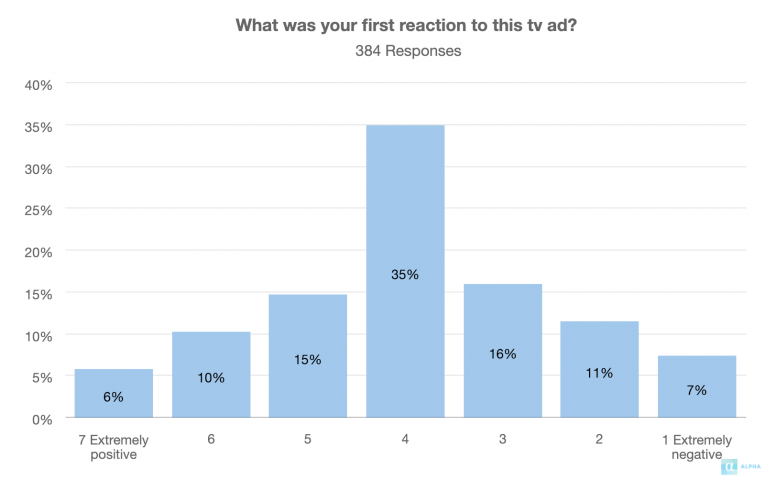 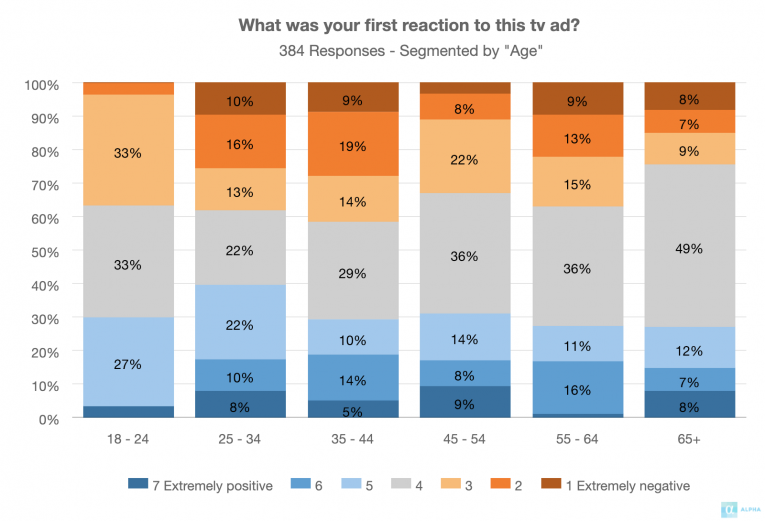 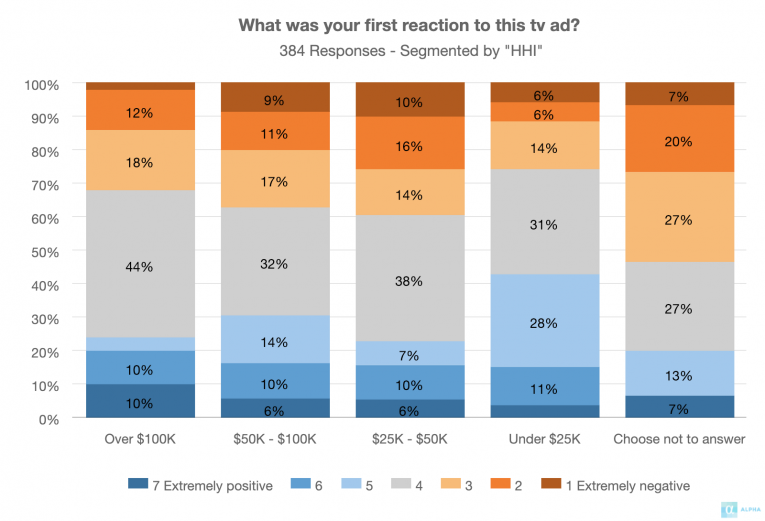 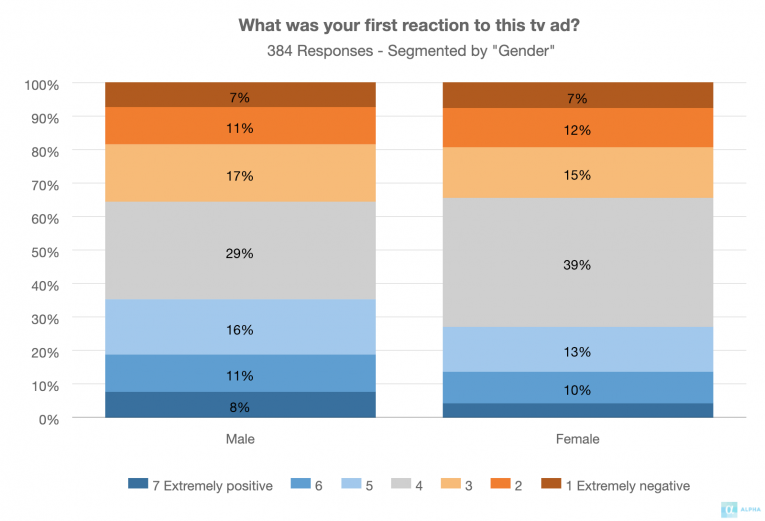 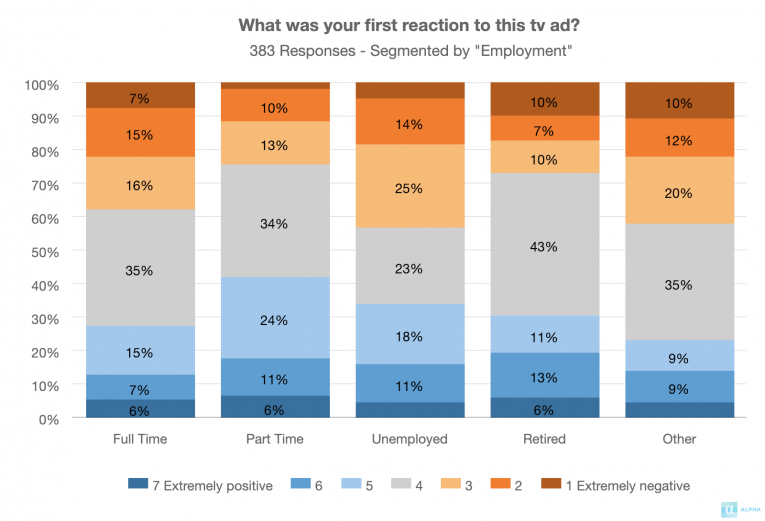 It gets really interesting when people started filling in open-ended responses.

On the “extremely positive” side:

“I love Andy Warhol and his art collections and he was eating Burger King. and I love Whoppers. It made me extremely happy to see him enjoying a Burger King burger as much I do.” Sounds like Burger King found its exact target customer with this response.

“It’s neat and I can relate. It’s sort of an ad that would appeal to ‘regular’ people.” Marketing team hit that one on the head, too.

“Andy Warhol is just a character, his mannerisms are like a child almost. It's amusing how he pours a bunch of ketchup and just barely dabs his burger in it.” I guess there’s some truth to that.

“I like the reference to Andy Warhol, but I don't get what that has to do with Burger King.” I suppose the point is, on the surface, it doesn’t?

“Basic truth of loving a great Burger and fries without all the hoopla. Perfectly done!” The quiet angle worked here clearly.

“Interesting. Kept waiting for some kind of event so I watched it all the way. Simple, to the point, and entertaining.” Suspense drummed by lack of action. Possible still, even in today’s world.

“I thought that the guy was pretty odd looking and really couldn't figure out exactly what he was going to do.” I guess this is one of those 65 percent people. I’m not sure what else there was to do but eat a burger …

“I didn't really care for it either way. It was kind of vague, just an odd man eating a burger with too much ketchup.” Odd is probably a word Andy would have embraced.

And now we start to get into the negative takes.

“I saw this first during the Super Bowl. I knew who it was, but wasn't 100 percent sure if it was actually he (I wondered how the footage came to exist) or if it was an impersonator. Also, I couldn't tell until the logo flashed on the screen if the ad was for the fast food or ketchup.” There’s a lot going on in this response. In some ways, Burger King was successful in creating a ton of intrigue.

“I understood the reference to Andy, but didn't like the commercial. Burger King ads tend to be more comical and are remembered. I remember this commercial only because I saw it yesterday during the Super Bowl.” Someone with whom the new approach did not land.

“When I watched it during the Super Bowl, I didn't notice the ketchup actually come out so I was confused. Now that I see it more closely, that's how I prefer to eat it, but who cares? It's boring. I'm going to McDonald's.” Customers are a fickle group sometimes.

“The guy looked a little weird. I understand him getting a Whopper, but, it is wrapped and in a box. Also, why does he pour so much ketchup on the paper? He could have had it ‘His way,’ and got the ketchup on the whopper. He dipped the Whopper in the ketchup, so I understand he is able to get as much ketchup in each bite, I just didn't understand or relate to the commercial.” Too much wrapped up in this statement for me to dissect. I suppose if you had no idea that was a famous artist and filmed years ago the whole thing would come off rather strange.

“Too much packaging. Too much noise from packaging. Person seemed bored. No music.” Crashes, dragons, and commercials where stuff blows up are still being run for a reason.

“This ad is extremely dated. Warhol hasn't been relevant for a very long time. It does a poor job of creating brand loyalty and if anything, it’s negative. They add ketchup to the burger? Isn't it good enough to eat on its own? Most millennials will not know who Warhol is. Fail.” A harsh take but some of those points are probably shared by others. The ad likely wasn’t intended to make the burger itself look great. But the trade-off positives of the spot definitely take some hit there. Especially against today’s typical ads where the product looks like it was sculpted by an artist and is the size of somebody’s head.

“It's just weird … don't know Andy, don't recognize the Whopper as a Whopper, don't get the reason/message of the ad.” Again, the deeper meaning aim wasn’t going to work 100 percent of the time.

Do you know who the man in this TV ad is? 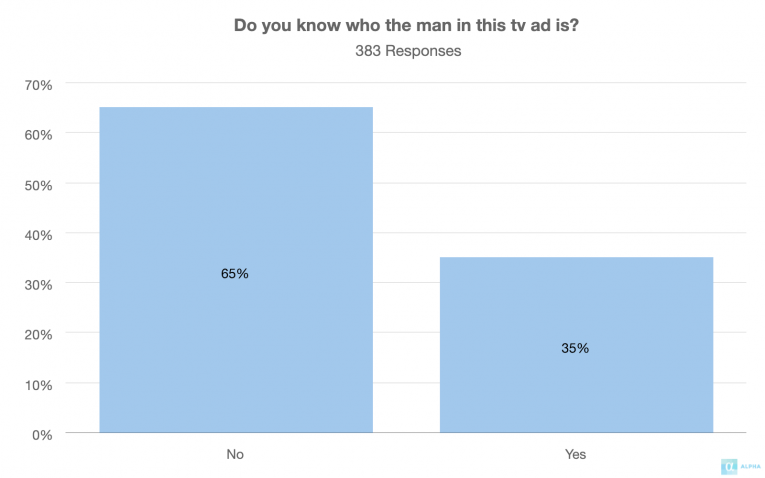 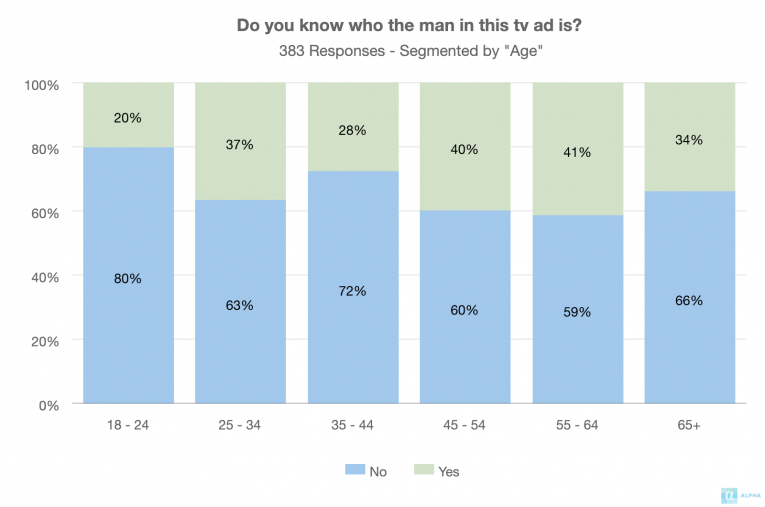 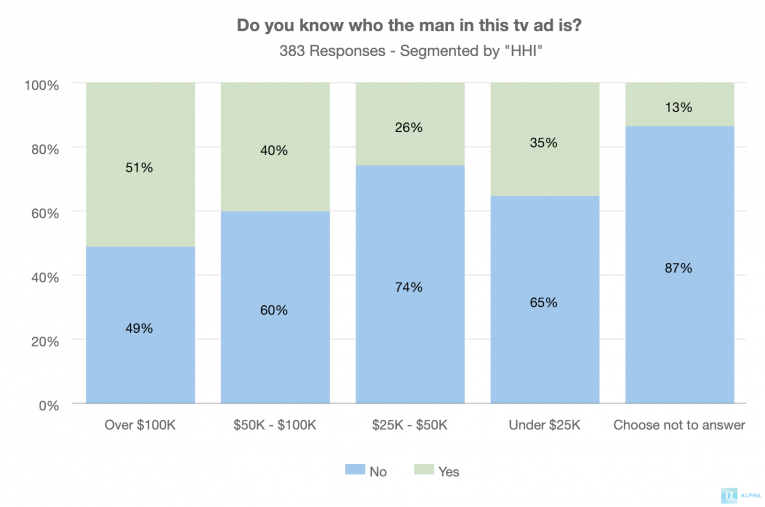 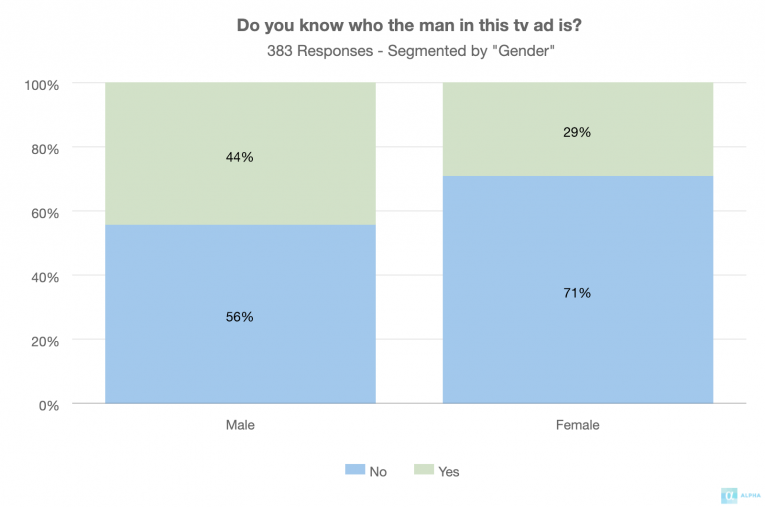 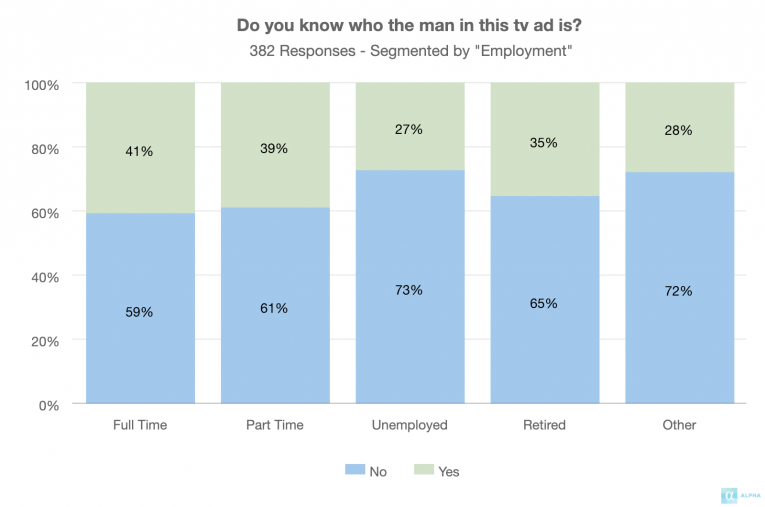 Which of the following do you believe best describes the man in this ad? 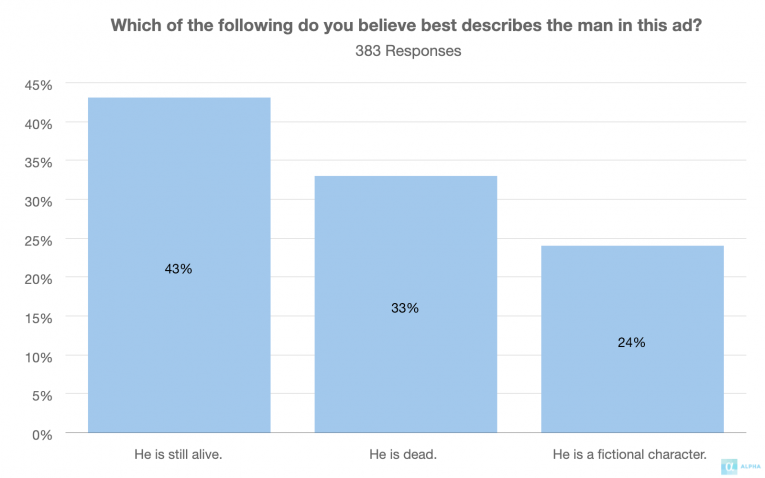 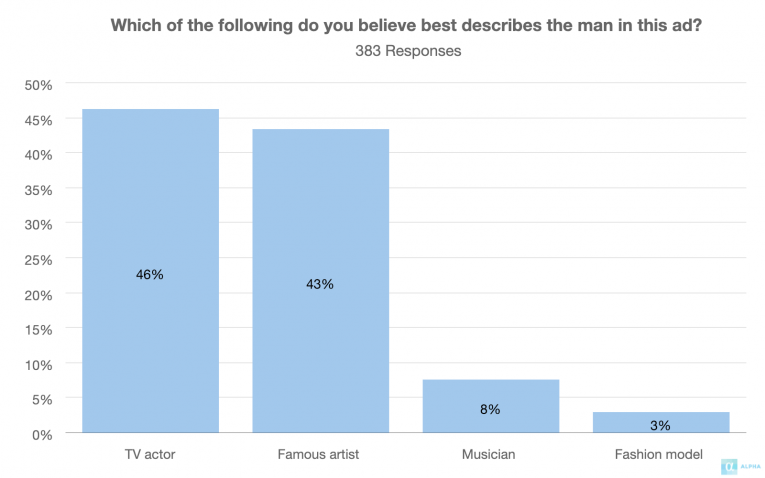 In the question, what company is this ad for, the vast, vast majority said “Burger King.” There were some ketchup responses, though.

How much do you like or dislike the ad? 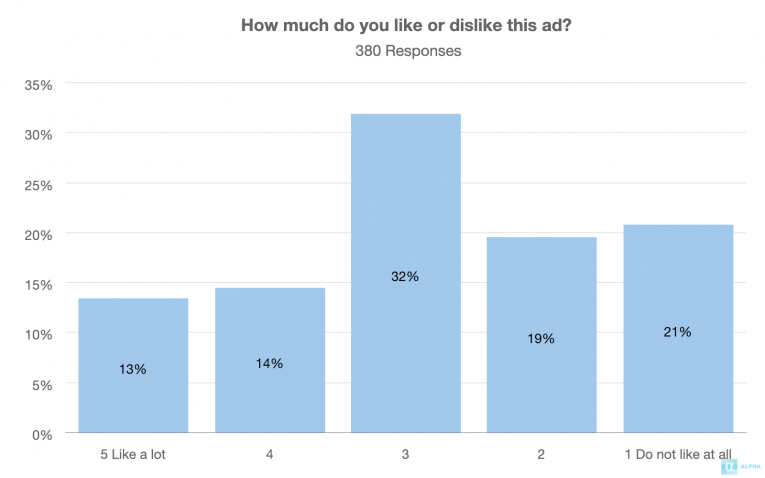 Is this a good spokesperson for Burger King? 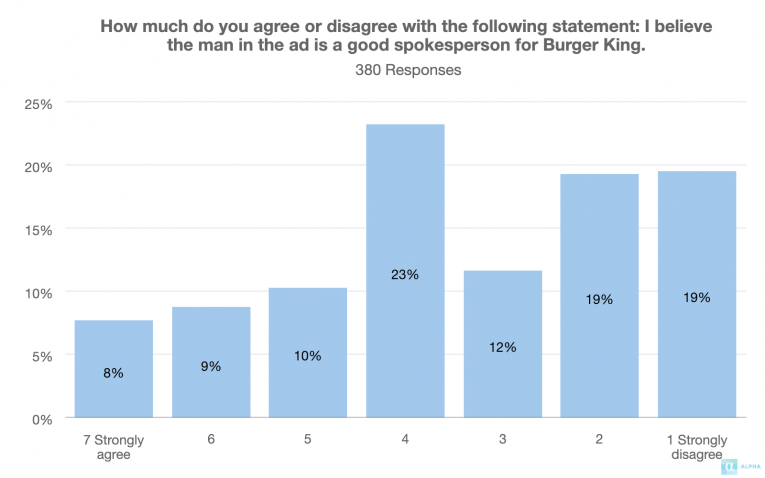 Here was an interesting one. How much do you agree or disagree with the followings statement: This ad has inspired me to eat Burger King?

Thirty-five percent said no, as you can see. Otherwise it seemed kind of even. But maybe that wasn’t the full intent of the ad. Then again, isn’t it always? 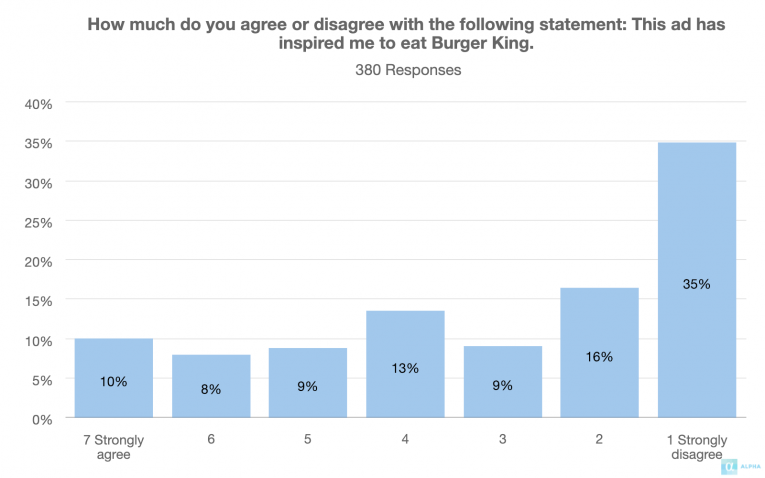 A final point, how effective was the hashtag #eatlikeandy? 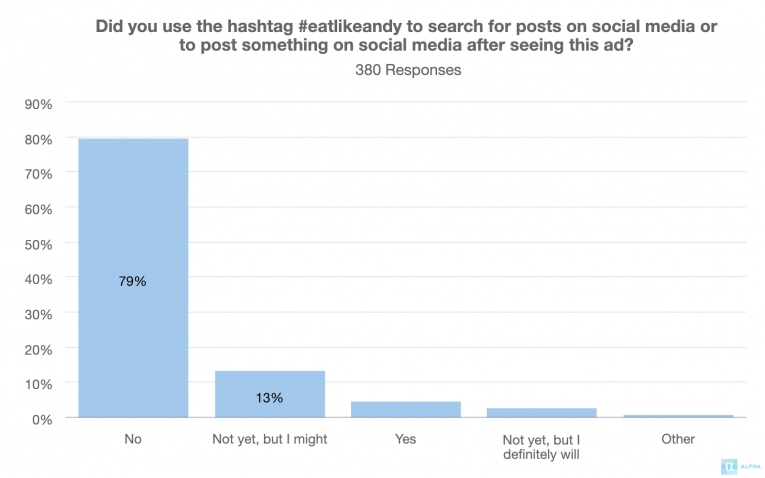 Overall, Burger King’s ad seemed to be one that struck very strong emotions. Either people got it and appreciated it; they were intrigued and kept watching; didn’t know who it was and were confused; or wondered why Burger King wasn’t blowing something up. Marketing is always a give-and-take process that comes down to generating conversation. The chain definitely did that here, for better, worse, and everything in between.