The brand ditched the Donuts in late September. What was the effect?
Marketing & Promotions | October 2018 | Danny Klein

Dunkin' dropped the Donuts from its name on September 25.

One of the leading culprits behind Dunkin’s decision to drop the Donuts for good had nothing really to do with signage or outright branding. Executives wanted to convey a fresh energy about the brand, one that reflected aggressive changes across the visual and operational spectrum of the iconic chain. For example, the fact that Dunkin’ was making significant updates to become a beverage-led company, like investing in afternoon options, cold brew, CPG products, and more. Or the clean and modern refresh of its next-generational restaurants, which puts an emphasis not just on mobile and to-go orders, but on improved products, like the front-facing bakery and tap system.

“A signal to the world that it’s a new day at Dunkin’ in more ways than one,” CEO David Hoffmann said. Even Hoffmann himself is a bright change, having just stepped into the role this past July. Hoffmann, Dunkin’s U.S. president since October 2016, succeeded Nigel Travis in a succession plan more than two years in the making.

The September 25 announcement to ditch “Donuts” was, in a collection of ways, really an emotional switch as much as it was a tangible one. And it was intended to convey, as Hoffmann noted, the notion that Dunkin’ is really a brand on the move (in a good way).

So has it worked? It obviously hasn’t been long but the initial burst is a critical indicator.

YouGov took a dive into the flip with its YouGov Plan & Track. Since the official announcement, Dunkin’s “Buzz” score climbed from 12 to 21 among the general public, indicating that an increasing number of U.S. consumers are hearing something good about the brand. In other words: more U.S. adults are talking about Dunkin’ than at any point this year. The scores range from negative 100 to 100. See the chart below to see how the Dunkin’ announcement spiked the reaction. 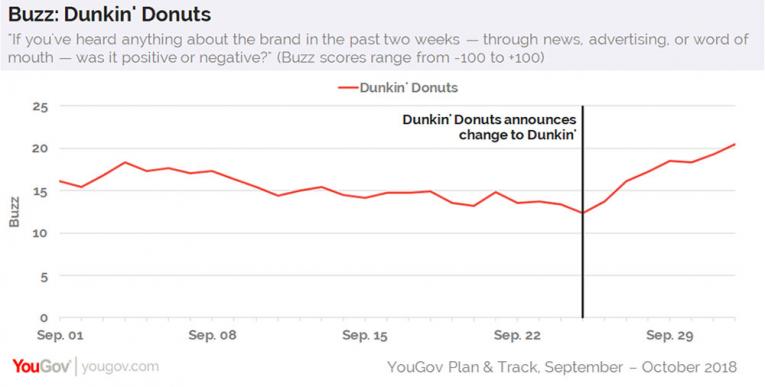 Just this week, on October 2, YouGov’s data showed that more people were talking about Dunkin’ than any point all year, showing that it wasn’t just a one-day phenomenon. Dunkin’ was able to slow-build this news and leverage it to multiple channels with a variety of promotions. It was also able to use the branding to tack on additional messages, like its BOGO National Coffee Day deal, the launching of an All You Can Meat Breakfast Sandwich, a Coffee Porter made with Harpoon Brewery, sustainability agreement with World Coffee Research, partnership with Dove on dry shampoo, and whatever was going on with Oreo recently on Twitter. Now, was it a coincidence that Dunkin’ changed its name and then went on a news spree for a week? Maybe so, but probably not.

Either way, on October 2, YouGov’s data showed that nearly one in four (23 percent) consumers aged 18 plus recalled discussing Dunkin’ with friends or family members in the past two weeks, up from 15 percent on September 25. Between January 1 and September 24 of this year, Dunkin’ averaged a “Word of Mouth” score of 17 percent.

Check the graph below. 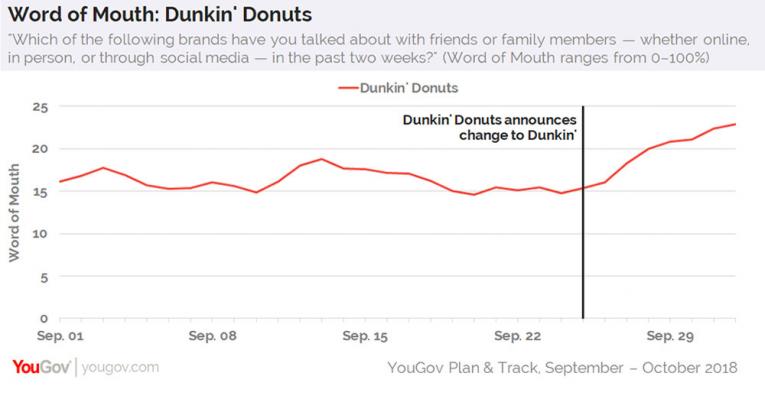 Following the Dunkin’ name change, the brand’s Purchase Consideration score, which gauges how open consumers are to buying an item from the chain when next in the mood for food or drink, briefly climbed from 28 to 30 percent before settling back.

And the other part to this buzz bump is that Dunkin’ simply announced the change was coming. The real work doesn’t kick in until January 1. That’s when logos, packaging, advertising, online, and new and remodeled units will begin reflecting the updated branding. The signage will turn over gradually as stores remodel. Beyond what that might mean for consumer sentiment, it will undeniably give Dunkin’ another prime opportunity to tout the “new day” changes taking place. Also, Dunkin’, as mentioned throughout the year, is planning to open 1,000 net new stores in the next three years—90 percent of which will be located outside of its core markets. Dunkin’ expects to have 50 next-gen units open, between new builds and remodels, by year’s end.

What this all adds up to is a very unique chance for Dunkin’ to promote this reenergized positioning to new and familiar audiences. But definitely new audiences. And those customers who know the brand but don’t interact with it daily like Northeast guests, will see all the changes front and center without any past bias. That includes just the name, Dunkin’, and what that might entail compared to the old days (Dunkin’ still sells some 3 billion donuts a year. It’s a 60/40 split between beverage and food with the majority of the beverage sales being coffee).

Dunkin’ is pouring $100 million into this beverage-led strategy, including equipment to support its on-the-go beverage-led strategy (65 percent of the investment); technology infrastructure to support its digital leadership (30 percent, with the majority expected to capitalize and appreciate over the life of the asset and to Dunkin’s service agreement); and lastly, 5 percent of the total investment for G&A to support the testing, training, and rollout of these initiatives.

“By simplifying and modernizing our name we have an opportunity to create an incredible new energy for Dunkin’, both inside and outside our stores,” Tony Weisman said.

And the next couple of years, as handfuls of new Dunkin’ enter the U.S. marketplace, there’s an opportunity to showcase and share the story unlike any the brand has seen to date.