The campaign is all about experience, and value.
Marketing & Promotions | January 2019 | Danny Klein

A limited-edition fleet of pizza delivery vehicles, powered by Hyundai will take to the streets of Atlanta.

Pizza Hut’s first year as the official sponsor of the NFL has been an eventful one. Its goal of offering a “homegating experience” lived mostly across three top-line channels throughout the season: A “Game Plan” digital platform via its Huts Rewards loyalty program, TV campaigns and updated marketing materials, and an augmented reality push that allowed guests to play cornhole from the safety of their living rooms.

Now, with Super LIII set for February 3, Pizza Hut unveiled its last act of the season Tuesday, which includes an “unprecedented offering.”

Broadly, Pizza Hut is serving up a series of experiences around value, it said, as part of an "overdeliver” Super Bowl campaign.

Loyalty members who order from Pizza Hut on Super Bowl Sunday, when the New England Patriots face the Los Angeles Rams in Atlanta, will receive a unique code to redeem on all official NFL and Super Bowl LIII merchandise from NFLShop.com. Each code will be delivered via email February 4 and is valid until the end of the month.

Pizza Hut’s $7.99 large, two-topping pizza and $5 Lineup deals will be available as well.

On site in Atlanta, Pizza Hut is changing the signage from Pizza Hut to “Pizza Hut Hut” at a downtown restaurant. That branding will extend to the chain’s website, social channels, and gameday email communications.

Pizza Hut is also hosting dedicated “prep rallies” for employees, which are internal training sessions that include a personalized hype video from Pittsburgh Steelers wideout and brand ambassador, JuJu Smith-Schuster.

Additionally, during Super Bowl week, a limited-edition fleet of pizza delivery vehicles, powered by Hyundai will take to the streets of Atlanta. They’ll offer “Super Bowl-level” surprises for fans, the company said.

At the Super Bowl Experience, people will have the chance to dance alongside Smith-Schuster and fellow wide receiver Antonio Brown via augmented reality and pick their favorite dance to share on social media. They can also pose with the MVP award. Pizza Hut is offering a “Let’s Make a Delivery” obstacle course for fans, too. 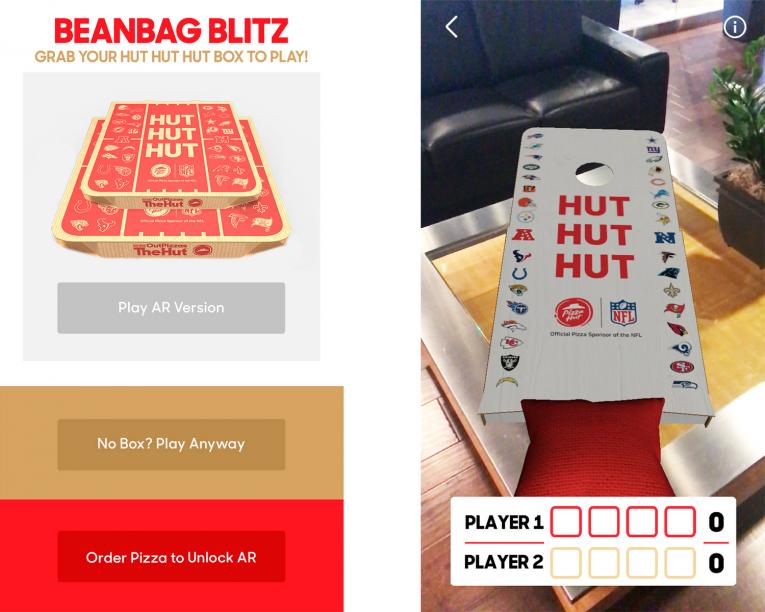 Pizza Hut’s Rewards program has played an integral role in its activation efforts all season. The “Game Plan” digital platform let customers receive “kickoff reminders” from Pizza Hut, as well as exclusive offers and chances to win prizes throughout the season. The kickoff reminders sent users an alert three hours before their favorite team’s game, noting the upcoming contest and also asking if they want to place a pizza order.

Marianne Radly, Pizza Hut’s chief brand officer, said the platform was designed to build loyalty and foster a repeatable model, “and almost build the habit with them.” The platform lets customers opt in or out of additional marketing. “It’s really about making it easier, and it’s rewarding them for their purchase,” she told QSR earlier in the season.

The AR feature, called “Beanbag Blitz,” gave users the option to unlock an augmented reality component by lining their camera up with the top of Pizza Hut’s special-edition box. “As you look, again, we are heavily engaging in the digital space. That’s where our customers are living, and we thought this would be a fun thing to bring to them,” Radley said.

Pizza Hut operates over 16,800 restaurants in more than 100 countries. The chain’s sales increased 1 percent internationally, year-over-year, in the third quarter and declined 1 percent in the U.S.