Was Wendy's Mixtape Just the Beginning of a Bizarre Trend?

Wendy’s, Pizza Hut, and Dunkin’ Donuts are duking it out this spring with PR moves a country mile outside of the box
Marketing & Promotions | March 2018 | Trevor Lenzmeier

At the turn of the century, the Internet was just becoming commercialized. It would take another few years for the World Wide Web to become ubiquitous, and another couple for social media platforms like Facebook and Twitter to revolutionize how people, ideas, and public and private entities interact online.

Of course, businesses of every kind were bound to use this technology to engage with customers. But it’s tough to imagine even the most savvy market forecaster would’ve been able to predict that in 2018, three of the nation’s leading quick-service chains would release a mixtape, customized running shoes, and high-top basketball sneakers that have the ability to pause the television or order a pizza.

Pizza Hut announced this month the return of the Pie Tops, resurrecting a special promotion from last year’s NCAA National Championship that gifted the novelty sneakers to a few lucky customers. But the Pie Tops II’s actually went up for resale on HBX—for just $150, 50 Pizza Hut fanatics had the opportunity on March 21 to order a pair in either red or wheat.

The Bluetooth-enabled sneakers aren’t just for show. By linking the sneakers with the Pie Tops app on user’s phones, pizza can be ordered by pressing a button right on the sneakers (after confirmation on the phone, of course). And when the pizza arrives, customers with DirecTV, Verizon FiOS, and Xfinity can pause the TV with just the press of a button. 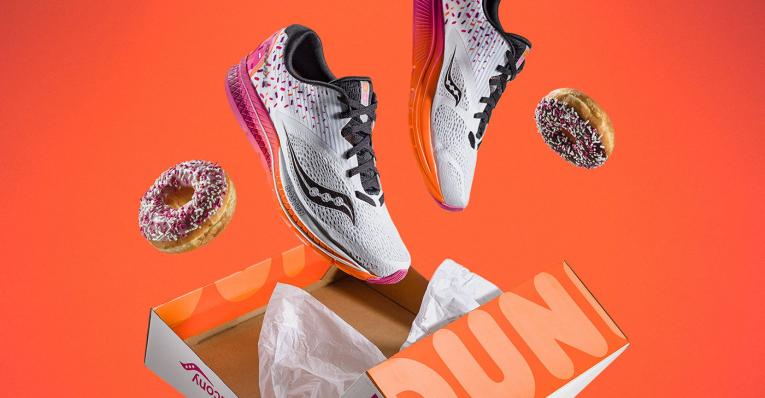 The doughnut and coffee shop linked up with another Boston­–based brand, Saucony, to release the Saucony X Dunkin’ Kinvara 9, a limited-edition version of the award-winning Kinvara 9. While the Pie Tops II’s might be more for show, novelty, and convenience, the lover of long runs followed by fresh crullers would actually get good use out of the new kicks.

The shoes feature doughnuts on the heels, plus orange, magenta, and brown sprinkles that complement those same accents on the body of the shoe, per the Dunkin’ color palette. The shoe’s tongue features the brand’s logo and on the center heel, script reads, “America Runs on Dunkin’.” Literally.

But no PR move this month has been more outlandish than one made by Wendy’s. Yet given the precedent set by the quick-service chain’s Twitter feed—where users and competitors trying to throw shade at the brand are routinely fried, served, and dismissed in front of an audience of millions—the latest from Wendy’s actually seems right up the brand’s alley.

That doesn’t make it any less bizarre that Wendy’s hired a rapper to assume the role of its mascot and her red pigtails and record a five-song mixtape full of McDonald’s disses and boastful lines about fresh, never frozen beef. The only thing that might be more mind-boggling is that the production and rapping is actually pretty good. Listen to it here

The third song on “We Beefin?” is the perfect encapsulation of the stunt—both the mixtape and the online presence that Wendy’s needed to master to pull it off credibly.

“Rest in Grease” is a 90-second synth-laden diss against McDonald’s in which Fast Food’s First Lady raps, “Boy, we tried your food, where the flavor at? / You number one? That’s a joke / Why’s your ice cream machine always broke? / Why’s your drive through always slow?” The insults are common fodder for the Wendy’s Twitter, and the brand even makes reference to one of its most successful organic social media campaigns.

At the end of the song, “Wendy” says, “Y'all too chicken for this beef / I'm gonna leave you resting in grease /Nuggs for Carter, Retweet.” This is a reference to Carter Wilkerson, a Twitter fan who direct messaged the brand wondering how many Retweets it would take to get him a lifetime of nuggets.

At that point last year, asking brands for outlandish guarantees was a tried and true Twitter meme. But usually, the brand’s “response” was a cheap Photoshop job. But Wendy’s was for real. Carter didn’t get 18 million Retweets, but his plea for nuggets—and the accompanying #NuggsForCarter campaign—became the most Retweeted tweet of all time.

That moment could’ve just been a joke for the brand. Instead, Wendy’s notched 3.2 billion earned media impressions, 11 million online mentions of the chain, 213,000 new followers, and nearly 24 million profile views in the month of April 2017 alone.

Carter got his nuggets and Wendy’s donated $100,000 to the Dave Thomas Foundation for Adoption. It was a rare win-win-win scenario.

Wendy’s latest stunt proves yet again that brands can interact with customers online—even younger demographics, known to be skeptical of brands bothering them online—in a natural and successful way.

Of course, Wendy’s isn’t the only chain with a strong social media team.

MoonPie’s Twitter feed is whimsical and hilarious, and consistently garners hundreds of thousands of interactions online. Hamburger Helper, in fact, has been savvy with memes for years, and introduced its own rap product, the “Watch the Stove” mixtape, in April of 2016. Check the company’s Twitter feed, and they’ll be sure to tell you Wendy’s is late to the game.

Currently, the songs on “We Beefin?” are hovering around 500,000 plays on Spotify. “Watch the Stove,” on the other hand, has nearly 15 million plays on its five-song mixtape. Of course, it’s been out for nearly two years, but Wendy’s does have more than two million more Twitter followers than the Helper. That’s only to say that if Wendy’s beefs with the OG, they’d better not miss.