The 'Marrot' is turkey shaped like a carrot.
Menu Innovations | June 2019 | Danny Klein

The chain said Wednesday, in true Arby’s fashion, it’s working on turning meats into vegetables. What does that mean? For starters, it’s a meat carrot (or Marrot). Arby’s cut a whole turkey breast into the shape of a carrot, sous vided the product for one hour, then rolled it in a special carrot marinade and a brûlée with maple syrup powder. Arby’s oven roasted the carrot-shaped turkey for an additional hour before topping it off with a fresh spring of parsley to give it the full carrot effect.

As offbeat as this sounds, Arby’s did say it’s still in the early stages of exploring the “Megatables” concept, and the “Marrot” won’t initially be available to guests. However, the company plans to continue innovating behind the scenes to fill out “the category of protein-packed vegetables,” it said. And Marrot and Megatables are trademarked terms.

“Plant-based meats are the latest incarnation of making vegetables look like what Americans really want, which is great, tasty meat,” Jim Taylor, Chief Marketing Officer for Arby’s, said in a release.

“Universally, people know we’re supposed to eat vegetables every day. But 90 percent of American’s don’t eat the recommended amount,” he added. “So we said if others can make meat out of vegetables, why can’t we make vegetables out of meat?” 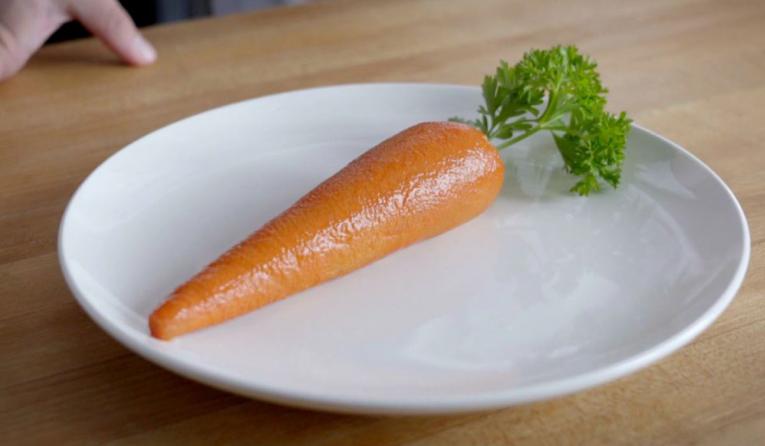 Arby’s said the Marrot offers more than 70 percent of the recommended daily value of Vitamin A and packs 30 grams of protein.

“Jim called me and said it’s time for us to change this paradigm of turning vegetables into meat,” Neville said in a statement. “We kicked around some ideas and landed on creating the first-ever meat carrot, or Marrot.”

Arby’s said the Marrot offers more than 70 percent of the recommended daily value of Vitamin A and packs 30 grams of protein.

“We’ve never created anything like this,” Neville added. “But most of the product development Arby’s works on is new to the industry. That’s the exciting part of this job; we’re always innovating and hungry for more knowledge.”

Taylor said Arby’s would “continue to innovate in the space of meat craft that never existed before in ways that are surprising and delicious and exceed the expectations of what you can get through a drive thru.”

“Culinary innovation is one of the key tenants of Arby’s. We test more than 1,000 menu items per year, and we remain committed to providing our guests with the highest quality meats in the industry,” he said.