Foodservice at the Bat

Concessions at sports venues no longer stop at hot dogs and popcorn. In fact, arenas and ballparks are becoming food destinations.

Four quick serves cluster near one another in a small corner of Seattle, dormant aside from the activity buzzing around them preparing them for their grand openings. All four are set to open on the same day in April, and all four plan to deliver premium quick-serve options to the people of the Emerald City.

Customers of these four new concepts will be able to sample the home-spun quick-serve options—all of the concepts use local ingredients in some way—and watch a hometown Seattle Mariners ballgame while they’re at it.

Heck, they can even catch a homerun ball from Ichiro. That’s because the four new quick serves are nestled into the outfield section of Safeco Field, home of the Mariners, and are debuting for the 2011 season.

The quartet of concepts at Safeco Field are the brainchild of John Sergi, chief design officer of Centerplate Stir, the strategy arm of Centerplate, the foodservice provider for Safeco Field and dozens of other sports venues. Sergi’s very position, which was created just a year ago, suggests that sports venues are no longer just wanting standard food offerings from their foodservice providers—they’re demanding better food, better hospitality, and a better service strategy. 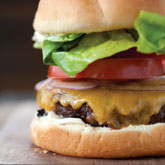 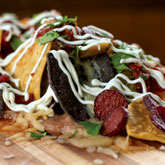 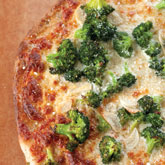 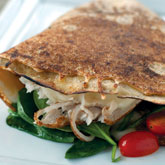 (From left) Hamberg + Frites at Seattle’s Safeco Field uses humanely raised beef for its burger patties. Flying Turtle Cantina/Tortugas Voladoras is a Mexican concept that will shop tortas to fans. Apizza will bring a taste of the East Coast to Safeco. It is a New Haven–style pizzeria developed by renowned pizza chef Bill Pustari. La Crêperie, a Parisian-style creperie, wraps ingredients into a triangle-shaped crepe and sticks it in a cone for portability.

“Food is a heck of a lot more than a revenue source; it’s truthfully one of the most palatable ways to talk to people,” Sergi says.

“Yet in the business of sports, the perception of food is primarily that of a revenue source. That never made any sense to me, because here you are, you’re in the business of entertaining people, and if there’s one thing you have at your disposal that can completely seal that deal every time regardless of how well anybody plays on the field, it’s food.”

Of course, food has always been a vital element to sporting events. Grabbing a beer and hot dog at the big game is just as cliché to sports as the terms “we’re giving it 110 percent” and “it’s a game of inches.”

The food cliché, though, is not just a broad generalization of what sports fans like to consume at games—it’s what they buy in mass volume. Pizza, hot dogs, burgers, pretzels—all are menu heavyweights at stadiums, arenas, and ballparks around the country.

But just as quick serves and fast casuals are upping the ante on the food they serve in their stores, sports venues are experiencing a renaissance of sorts in the food department.

“People are looking at the Food Network and they’re becoming more culinary savvy, and they’re looking for some of the items that used to just be served in premium areas,” says Andrew Shipe, vice president of marketing for Aramark Sports & Entertainment.

A look at foodservice offerings at sports venues around the country confirms that venues are hearing fans’ cries: fried walleye at the Minnesota Twins’ Target Field, toasted ravioli at the St. Louis Cardinals’ Busch Stadium, and a kielbasa grinder at the Pittsburgh Penguins’ CONSOL Energy Center are just a handful of the gourmet items that have graced stadium concession menuboards.

Aramark runs food and beverage services for 12 Major League Baseball stadiums, including PNC Park in Pittsburgh, Turner Field in Atlanta, and Fenway Park in Boston. Shipe says these operations include a mix of recognizable restaurant names and original brands designed specifically for the ballpark experience.

It’s with these original brands, Shipe says, that Aramark has begun to diversify its offerings and give fans something beyond the staples.

“They’re looking for fresh food, so a lot of the food that we’re serving at some of our venues is grilled right in front of the customers,” Shipe says. “We have carving stations to create our meats, whether it’s a rib that’s being carved in front of them, a smoked brisket, a pulled-pork sandwich; we put the action right in front of them. That was something we used to see in premium [areas], but we’re seeing it trickle down into general concessions.”

Aramark is also offering more local options in each of its venues—“We make sure we represent the local culinary talent,” he says—as well as healthy options to account for increased demand. Grilled chicken sandwiches, gluten-free items, and fresh sushi have all found their way to Aramark-run ballparks.

“Women are becoming a hard demographic on our baseball menus—it’s almost 40 percent,” Shipe says. “So we have to look at the dietary piece that they’re looking for.”

The premium food trend isn’t limited to big-city venues. At the Durham Bulls Athletic Park in Durham, North Carolina, local barbecue and craft beer are included throughout the concessions, as well as healthy options like vegetarian hot dogs and black-bean veggie burgers. Tammy Scott, general manger for Centerplate at the Durham Bulls Athletic Park, says customers have asked for a range of other foodservice offerings, including empanadas, fried pickles, and turkey legs.

While the Bulls strive to provide the food customers crave, Scott says a balance still needs to be struck between standard offerings like hot dogs and burgers and more outside-the-box offerings. For instance, a healthy food cart that made its way around the 10,000-seat park in 2010 after customers asked for healthier offerings, she says, was discontinued because of poor sales.

In its efforts to bring local flavor to its venues, Shipe says Aramark partners with local brands to give fans that food familiarity. Primanti Bros. and Quaker Steak & Lube, for instance, are a pair of Pittsburgh-area brands that opened in PNC Park.

Even Shake Shack, the massively popular New York City–based burger joint, has found its way into sports foodservice; the concept opened a unit in the New York Mets’ Citi Field in 2009.

“We want to be in places where we believe the fan base can really appreciate what we’re doing,” Maynard-Parisi says. “We don’t just want to go to some random place just to make some money. That’s really not that important to us. We want to create a really special experience for people.”

While menu options at sports venues are becoming increasingly diverse, much of the strategy behind foodservice operations at the venues is beginning to include elements such as marketing, branding, and positioning. 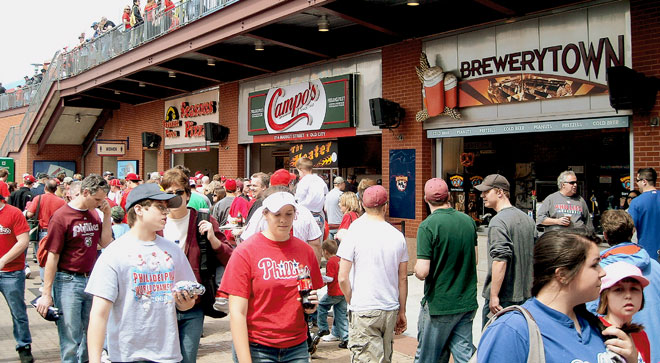 Aramark teamed with MLB Advanced Media LP to provide the At Bat smartphone app for fans at Citizens Bank Park, home of the Philadelphia Phillies. The app lets fans interact with the park’s foodservice offerings and even order food to be delivered to their seats.

“When you go to develop food concepts strategically, you can’t do what they do when they design food for a sports stadium. … The first thing they do is start working the menu,” Sergi says. “At any great restaurant you’ve been to, the menu was conceptual for a long time. You start with an identity, the attitude of the thing, and who you’re trying to talk to, what you’re trying to say.”

At Safeco Field, the Mariners were trying to appeal to the “20-somethings” who are attracted to the 10-year-old ballpark, Sergi says. The Bullpen Market—or “The Pen,” as it’s usually referred—was redone for the 2011 season to become a place for fans to congregate. The four concepts Sergi helped design were a big part of that.

“We’re not doing food design, we’re doing hospitality design,” he says. “When you’re designing a restaurant concept, you strive to connect all the dots, from the menu cover, to the uniform, to the music, to the lighting in the room, to the style of the food; you’re trying to get everything to speak in one voice to the customers. What I’m trying to do in this world is absolutely the same thing.”

Much of that “hospitality design” includes positioning concessions so fans don’t have to go far from their seats to get their favorite food, and even locating food stands where fans can watch the game while they order, Shipe says. Packaged deals that include food and tickets are also a convenient way to encourage fans to check out stadium concessions, he says.

“There’s one thing you have at your disposal that can completely seal that deal every time regardless of how well anybody plays on the field, it’s food.”

Something else sports venues are leveraging is social media. Many ballparks are notifying fans of foodservice options through Facebook and Twitter.

Aramark even partnered with MLB Advanced Media LP, the interactive media and Internet company of Major League Baseball, to develop an app for Citizens Bank Park, home of the Philadelphia Phillies. The At Bat app allows Phillies fans to check in at the park, interact with the stadium’s foodservice operations, and even order food to be delivered to their seats.

“By utilizing [teams’] social media or their websites, they can gain access to fans and be able to tell them about a specific promotion, a new sandwich that we’re creating, and what stand to go to,” Shipe says.

Although putting so much effort into foodservice operations that open only seasonally—and even then only for half of that season—might seem like a waste, Scott says there is a big reason why foodservice is such an important investment for ballparks and stadiums.

“I don’t think [customers] see it as just a ballpark anymore,” Scott says. “They see it as another outlet for competition of great food. They just want to see better options, more options. We have the restaurants across the street that we’re competing with, and we want to bring customers in to have dinner here instead of going across the street.”

Indeed, sports venues, as they continue to diversify their foodservice offerings and improve the settings in which they’re offered, might become a food destination in their own right.

“Ballparks last a long time, and you’ve seen a whole trend in the way food and sports are connected,” Maynard-Parisi says. “It used to be just for the luxury suites, and now it’s for the average ticket holder. Whether it’s Comiskey Park or Yankee Stadium or Citi Field, you’re really starting to see a lot of venues where the designers are … sacrificing some seats to create a better fan experience. That has been a lot with food and beverage.”

As old stadiums are renovated and new stadiums are built from the ground up in the next few years, Maynard-Parisi says, foodservice operations will continue to get better and better.

21 Main Street, Suite 204
Hackensack
NJ
203-883-6060
SH Franchise Finance is an independent finance company, so we know what it is like (more)
Kitchen Equipment, Workspace Equipment & Components