KFC Sells Out of Plant-Based Chicken in Five Hours

The fried chicken chain is now in the process of evaluating results and customer feedback.
Menu Innovations | August 2019 | Rachel Taylor

“KFC Beyond Fried Chicken is so delicious, our customers will find it difficult to tell that it’s plant-based,” Kevin Hochman, president and chief concept officer, KFC U.S., said in a statement.

In just five hours, KFC sold out of its new Beyond Fried Chicken. The test took place on August 27 in Atlanta. Lines wrapped around the restaurant as guests waited for the 10:30 a.m. launch.

Customers were treated to a free sample of Beyond Fried Chicken or could order a meal with the choice of nuggets or boneless wings tossed in one of three sauce options: Nashville Hot, Buffalo, or Honey BBQ.

“The test was so successful, guests purchased in five hours the amount of Beyond Fried Chicken KFC would normally sell on average of popcorn chicken in a week,” the Louisville, Kentucky-based chain said in a statement. 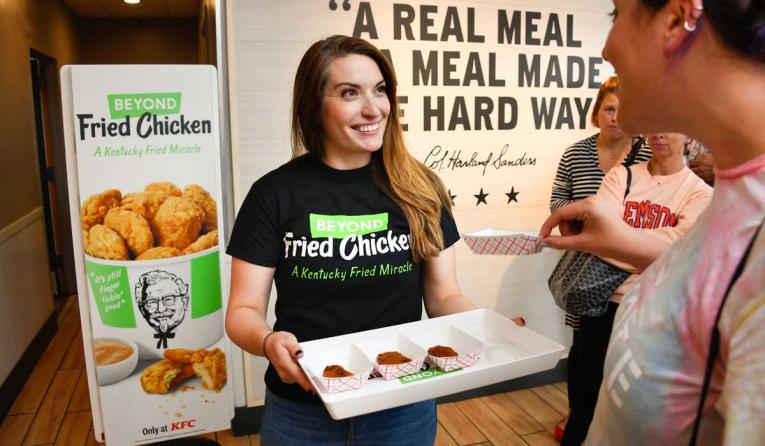 “KFC is an iconic part of American culture and a brand that I, like so many consumers, grew up with," Ethan Brown, founder and CEO, Beyond Meat, said in a statement. "To be able to bring Beyond Fried Chicken, in all of its KFC-inspired deliciousness to market, speaks to our collective ability to meet the consumer where they are and accompany them on their journey."

READ MORE: KFC’s New Recipe for Success is All About Guest Experience

KFC announced its partnership with Beyond Meat on August 26. The brand said it is the first national quick-service chain to test the plant-based chicken product.

So far there are no plans to restock Beyond Fried Chicken in Atlanta. KFC is evaluating the results of the test and using customer feedback to figure out how Beyond Fried Chicken will fit in the brand in the future. A larger test or national rollout could be down the road, the company said.