Why Constant Menu Innovation is Key

There's a reason it's the new norm in the quick-service industry.
Menu Innovations | March 2019 | Kevin Hardy

Velvet Taco takes menu innovation to the extreme with its Weekly Taco Features, which, yes, change every week.

Grant Morgan views the taco more as a vehicle than a destination. As the corporate chef at Velvet Taco, he’s stuffed tortillas with everything from camel meat to beef brains to shrimp and grits before topping them with elaborate sauces like spicy butternut aioli.

To make things even more interesting, his decidedly adventurous menu is always changing; Velvet Taco essentially rolls out 52 LTOs each year with its WTF, short for Weekly Taco Feature. Morgan says the world of food magazines, cooking shows, and social media has helped shape more sophisticated and intrepid customers. They don’t want just the same old thing, but rather demand to be surprised with new, exciting dishes even in the limited-service setting.

Indeed, many limited-service restaurateurs have accepted this new reality: Whether through buzzy LTOs or entire menuboards, operators from blue-chip fast-food chains to funky fast-casual concepts increasingly push the boundaries of what’s possible from counter-service restaurants.

“In our category, if you don’t stay ahead, you obviously fall behind,” Morgan says. “So I think everybody does their best to try to push those boundaries.”

At Velvet Taco, Morgan says he frequently finds ways—like using alternative meat cuts—to translate finer foods into his fast-casual operation, even as he sometimes feels limited by the need to offer quick and affordable dishes. He knows customers won’t pay $14 for a taco, but they’re still willing to pay a premium for higher-quality foods.

Velvet Taco’s WTF requires constant experimentation. Morgan has had ideas fizzle into failure more times than he can count. And the never-ending addition of new menu items also requires ongoing training with employees in the brand’s nine stores.

But the Texas-based trendy taco concept is far from alone.

“Consumers are always interested in something new and trying new things, especially millennials,” says Kara Nielsen, vice president of trends and marketing at food and beverage consultancy CCD Helmsman. “The best innovation is meeting some kind of unmet need and/or driving business and stealing or keeping share.”

Like every other element of the service, menu innovation should align with a brand’s overall identity. Customers aren’t necessarily craving something new from Chick-fil-A or In-N-Out, Nielsen says. But fans of Sonic Drive-In expect to see the brand roll out fun new items. Nielsen says Sonic’s buzzy Pickle Juice Slush fits well with a brand known for its lineup of shakes and slushes.

“It’s back to all publicity is good publicity. It sure got a lot of attention,” she says. “Radio DJs were talking about it and people would think, ‘Oh, I want to go try that,’ and they tried it.”

Like many of Sonic’s menu innovations, the sweet-and-savory pickle-flavored slush came from a trip scouting the newest food and beverage trends, says Scott Uehlein, Sonic’s vice president of product innovation and development. Members of the culinary team routinely eat their way through food carts, trucks, and local restaurants in search of inspiration. In November 2016, the team discovered pickle juice poured over snow cones at stands in Austin, Texas. They liked the idea and began exploring ways to make it work within the limitations of Sonic’s kitchens, cost structure, and supply chain.

“I don’t look at that as a limitation. We look at that as a challenge to say, ‘Hey, how could we do this for us?” Uehlein says. “Even as you look out in the wild at ideas, we are always thinking, How do we make this relevant for Sonic from a flavor standpoint and an execution standpoint?”

Uehlein says Sonic was uniquely positioned to pull off something as zany as a pickle-flavored sweet treat. “We are fortunate at Sonic to have a very adventurous customer,” he says. “They're willing to try a lot of things.”

The fast-casual brand’s delicately presented dishes—which range from slow-braised beef short ribs to Bananas Foster French Toast—are possible because of a serious emphasis on morning preparation work. “Our line is clean and simple,” says marketing coordinator Christie Marinari. “We try to cross-utilize ingredients as much as we can. We have our line down to a science.”

Customers don’t balk at paying more than $15 for a salmon dish or waiting the seven minutes on average for their orders, she says. But the menu can sometimes challenge consumer expectations, particularly as the brand puts its lineup of composed dishes against many local made-to-order fast-casual competitors.

“Utah is slightly behind in terms of the foodie scene,” Marinari says. “So we definitely challenge our demographic to try new things and maybe introduce a few trendier items that are on the cusp in other places, but maybe not so much here.” 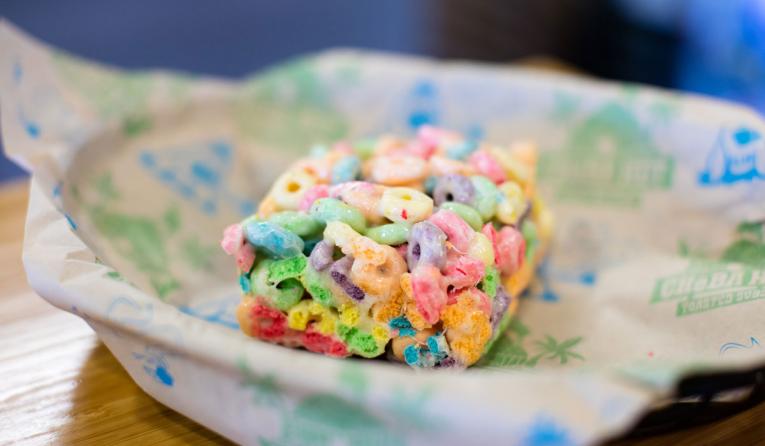 “We do hear some pushback. A lot of people come to Blue Lemon, and they don’t really know what we do exactly,” Marinari says. “We’re that hybrid between fast food and full-service restaurant.”

For KFC, pushing the boundaries within the chicken category is key to remaining relevant with consumers. But head chef Bob Das says it’s important to balance zanier menu items with the favorites customers have grown to love. “We don’t want something that’s way too far out there,” he says.

He points to the brand’s 2016 introduction of Nashville Hot Chicken as the beginning of recent menu innovations that shook up the category. That item led to other interesting sauces, including Georgia Gold honey mustard barbecue and Pickle Fried Chicken, an item that garnered national media buzz.

“We see what people are eating and what’s trending and see how we can put our KFC spin on it,” he says. But identifying ideas is just the beginning of the process.

KFC’s Chicken & Waffles was in the works for more than a decade before its 2018 debut. While waffle products abound, Das says the brand struggled to find just the right version to pair with the company’s core chicken lineup. That challenge highlights some of the inherent limitations on menu innovations. For KFC, an idea must be bulletproof to make it out of the test kitchen, ensuring that crews in all 4,300 stores can execute its preparation while still mastering the basics, like hand-battering fried chicken each day. And even as KFC has sought to push the envelope and entice new customers with quirky offerings, Das says innovation has been primarily limited around poultry.

“We’re a chicken company first and foremost. That’s where our main focus is,” he says. “For now, we just really want to focus on chicken and doing it right.”

Walter Zuromski, founder, president and culinary director at Chef Services Group, says technological advancements have played a huge role in paving the way for menu innovation in the limited-service category.

New equipment like ventless TurboChef ovens empower brands to prepare items like salmon fillets and lobster tails within just a couple of minutes, he says. And innovative products from manufacturers have sped up prep times for healthier grains like barley, farro, and long-grain rice, allowing operators to put them on limited-service menus.

Consumers continue demanding more sophisticated foods from quick-service operators, he says, requiring many to fold in fine-dining ingredients and techniques. “I think it has to happen,” Zuromski says. “Consumers are asking for it. But they want it fast.”

The funky Cheba Hut brand has always operated outside of the mainstream with its “Toasted” subs, billed as a cure for munchies aimed at a “very specific counter-culture.” But Seth Larsen, chief relationship officer for the 25-unit chain, says the novelty of a marijuana-themed brand draws in customers only once. It takes great food to keep them coming back.

Cheba Hut’s Secret Stash program empowers franchisees to continually offer two locally created off-menu items. That gives customers a feeling that they’re in the know. And it’s been a testing ground for the menu at large.

Team members in Mesa, Arizona, originally concocted the brand’s Skywalker LTO—a sandwich topped with cream cheese, salami, jalapeño, provolone, pineapple, pepperoncini, and hot sauce—as part of that store’s Secret Stash offering before it was rolled out to the entire system.

“That’s a best-seller,” Larsen says. “They have numbers behind it.”

Larsen acknowledges that many consumers are creatures of habit, but Cheba Hut wants to push them outside their comfort zones—a tendency that customers seem to reward. He pointed to a recent Chicken Caesar LTO. The traditional sub tasted “fantastic,” Larsen says, but posted soft sales numbers. The chain’s Grape Ape sandwich, on the other hand, is still proving popular more than a year after it disappeared as an official menu item. That sub is topped with grape jelly, meatballs, bacon, onion, and barbecue sauce.

“That sold a lot better just because people were willing to take a chance on something they can’t typically get at other places,” he says. “Our LTOs are more successful when they’re a little bit off the wall—the crazier the better.”