Industry News | August 25, 2010
Robeks Corporation announced that it signed a multi-year master franchise agreement with Tokyo-based Clarence Corporation to open 500 smoothie cafes in Japan and 12 other Asian countries. The deal is the largest in the company's history and is the first phase of a larger expansion plan to take the premium smoothie brand to major countries around the globe. 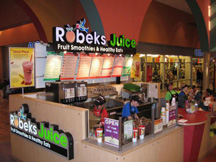 Masahiro Koh, president of Clarence Corporation, says the timing of the agreement coincides with a renewed interest from Asian consumers in developing healthful eating habits. "We believe Robeks, with its premium fruit smoothies, proprietary supplements, and other all-natural products, will be a major player in the made-to-order beverage restaurant category in Asia. With growing waistlines from the consumption of traditional fast food, consumers across the globe are increasingly concerned about proper nutrition and good health. We have our sights set on making Robeks the market leader in this emerging category."

Three prototype stores, which will include relaxing cafe-style interiors where guests can socialize while they dine, are expected to open before a broad based store roll out beginning in 2011. In addition to these larger format stores, the roll out is expected to include smaller format kiosks in shopping malls, universities, transit hubs, office buildings, and other high foot-traffic areas. All stores will carry the core of Robeks branded, premium smoothies, as well as products developed specifically to appeal to local consumer tastes.

"Since Robeks was founded in 1996, we have focused on one thing: offering the highest quality, blended-to-order fruit smoothies and other all-natural products to health conscious consumers throughout the United States,” says Steve Davidson, Robeks president and CEO. “We now look forward to bringing the great health benefits of Robeks delicious menu items to millions of new customers throughout the world by forming franchise alliances with strong operators in major countries around the globe. Our expansion in Asia is an important first phase of this new global growth initiative, and we are thrilled to have Mr. Koh as our partner."
News and information presented in this release has not been corroborated by QSR, Food News Media, or Journalistic, Inc.

1500 Riveredge Parkway
Atlanta
GA
770-240-7200
Consumers are eating out and on-the-go at an increasing rate, and they expect (more)
Cooking Oil Management

Introducing Pinkbox, the 'Willy Wonka' of Doughnuts
With Spicy Food, Restaurants Search for Next Big Thing
Is a 'Renaissance of Sandwiches' Coming to Quick Service?