“It’s going to take restaurants like Chipotle creating more of a demand, but also it’s going to take more work here to call for change in legislation” to end the overuse of antibiotics in the American food supply, Ells said.

Ells was joined by leaders from Niman Ranch and Ozark Mountain Pork Cooperative, both of which are networks of family farms that stretch from California to Maryland, supplying hormone- and antibiotic-free proteins to restaurants and retailers.

“Eating less meat but enjoying it more is the future in America,” said Stephen McDonnell, the CEO of Applegate Farms, which supplies minimally processed natural and organic meat to retailers.

The briefing was hosted by Rep. Louise Slaughter (D-NY) who introduced a bill to limit certain classes of antibiotics in animal agriculture earlier this year. To accompany the briefing, the newly formed coalition Citizens Against Superbugs took out a full-page advertisement in today's issue of Politico calling on the president to make good on his promise four years ago to curb the use of antibiotics at industrial farms. 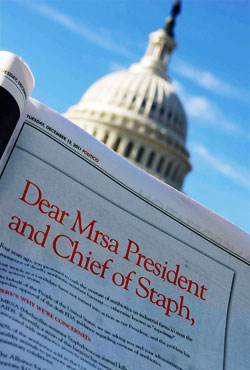 Slaughter is not alone in her efforts. The FDA also testified before Congress last year, outlining the link between antibiotic resistence in humans and the routine use of antibiotics in farm animals. In addition, MRSA, a deadly strain of Staphylococcous, recently emerged in humans and has been associated with antibiotics given to animals raised for food.

With concern mounting, consumers are also beginning to take a stand.

In a study released today by Applegate Farms, 75 percent of Americans want the government to restrict the use of antibiotics at animal farms, and 71 percent believe that antibiotic overuse and misuse is causing antibiotic resistance and a human health crisis.

As part of the briefing, Niman Ranch’s Paul Willis explained that consumer interest in food sources has pushed the issue of antibiotics in agriculture to the forefront. “It used to not be that way,” he said. “It wasn’t whether or not you were using antibiotics on your farms, it was what flavor,” explaining that it was often hard to buy animal feed that did not contain antibiotics and additives.

Despite increased consumer interest and Chipotle’s “Food with Integrity” campaign, Ells said the majority of the brand’s diners still come to his restaurants for taste versus naturally raised ingredients.

“Consumers come for taste then value then convenience when they eat at Chipotle,” he said. “When we began offering this type of food no one was asking for it. That’s slowly changing, but I don’t know when the tipping point will be when people value that more than taste or convenience.”

Strangely, it may be Ells’ competition that helps him achieve his goal of cleaning up the nation’s menu items and increasing demand on suppliers.

“Just recently there have been a number of Chipotle copy cats,” he said. “People can copy the Chipotle veneer because that’s easy, but the menu is becoming more and more part of this model, and I think more brands are coming” to market and offering naturally raised ingredients.

Although many brands, especially those with larger systems and global supply chains, often cite higher food costs as a barrier to entry into the movement, Ells said he has made his unit-economics work because of his highly efficient service line.

With $1.8 billion in sales, Chipotle ranks No. 18 in the QSR 50, an annual ranking of the top quick-serve and fast-casual brands in the U.S. compiled by QSR magazine.