Industry News | August 13, 2010
The National Council of Chain Restaurants (NCCR) announced that its president, Jack Whipple, is retiring after 34 years of service to the industry. NCCR is a division of the National Retail Federation (NRF), the world's largest retail trade association. 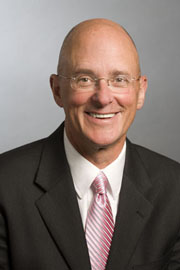 “NCCR is incredibly fortunate to have been the capstone of Jack Whipple’s extraordinary chain restaurant industry career,” says Pat Sheehy, director of government relations at Cracker Barrel and NCCR chairman. “Jack’s leadership, experience, professionalism, and tireless commitment to the chain restaurant community have been invaluable to NCCR. He is a class act who will be sorely missed, and we wish him the very best as he embarks upon his retirement.”

“We thank Jack for all of his years of service to NCCR and the industry,” says NRF president and CEO Matthew Shay. “On his watch, NCCR has become the preeminent trade group representing chain restaurants. While his shoes will be tough to fill, we plan to begin a search for a successor that will continue his work to broaden the scope and effectiveness of the organization.”

“It has been a distinct pleasure to be able to serve the chain restaurant industry through NCCR,” Whipple says. “I want to thank the NCCR Board and membership for all of their support and assistance in expanding the footprint and influence of this incredible organization.”

Whipple will continue to serve as president through the end of the year and then continue to serve the organization as a consultant and advisor.
News and information presented in this release has not been corroborated by QSR, Food News Media, or Journalistic, Inc.

How Technology Can Augment COVID-19 Safety Procedures
How Drive-Thru Restaurants Can Thrive in the Age of Social Distancing
Is Consolidation the Future of Restaurant Technology?

The HEALS Act Could Leave Thousands of Restaurants in the Dark
Yum!'s Digital Business Has Gained Over $1 Billion
Dunkin’ is Giving its Portfolio a ‘Good Scrubbing’