Industry News | September 20, 2010
Barberitos Franchising Inc. is reporting strong sales growth in both the first and second quarters of 2010 and in comparison to 2009 sales figures. The quick-service restaurant franchise with 22 locations in four states serves southwestern fare, including a variety of made-to-order burritos, quesadillas, tacos, salads, and nachos. 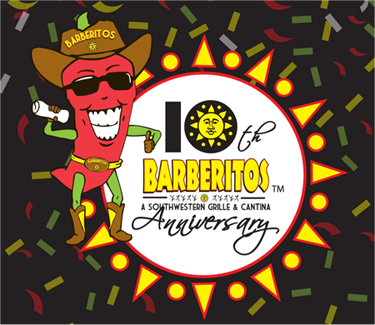 While not included in the figures, Barberitos added two locations in the last 10 months. The franchise company’s first metro Atlanta location opened in Roswell, Georgia, in December of 2009 and a location in Savannah, Georgia, opened in May 2010.

“We attribute the success we are experiencing to our high-quality food and customer service,” says founder and CEO Downing Barber. “We’ve done our best to stay the course during tough economic times and concentrate on what we do best which is serving farm fresh food in a friendly manner and I tend to think that is why we’ve continued to grow franchise locations and grow our sales.”

System wide sales have increased by 9.53 percent from the same period a year ago, with 80 percent of locations seeing increases.

“We’re glad to see positive numbers but we know we still have potential to grow as a company,” Barber says. “There are markets we are looking to enter as well as expand."
News and information presented in this release has not been corroborated by QSR, Food News Media, or Journalistic, Inc.

How Technology Can Augment COVID-19 Safety Procedures
How Drive-Thru Restaurants Can Thrive in the Age of Social Distancing
Is Consolidation the Future of Restaurant Technology?

The HEALS Act Could Leave Thousands of Restaurants in the Dark
Yum!'s Digital Business Has Gained Over $1 Billion
Dunkin’ is Giving its Portfolio a ‘Good Scrubbing’