Industry News | June 21, 2010
Starbucks has tried to find the perfect sustainable solution for its cups for several years now, but its recently completed betacup campaign tapped the ideas of the group it will affect the most—the consumers.

The betacup campaign, completed in conjunction with online platform jovoto and social product development firm Colaboratorie Mutopo, challenged customers to devise methods that will help Starbucks toward its goal of every beverage being sold in a reusable or recyclable cup by 2015.

“The betacup, we think, was really one way to engage the interests … of our consumer base, and really get some on-the-ground data from our customers to say, ‘Here’s what we think will help increase the number of transactions; here’s what will motivate us to change our behavior to utilize our cups more often and bring our own mugs in,’” says Jim Hanna, director of environmental impact at Starbucks.

Hanna says he was “pleasantly surprised” by the outcome of the betacup challenge, which brought in ideas from all over the world. Ideas ranged from cup design to promotional ploys to social media campaigns.

The top prize of the betacup challenge went to the entry titled Karma Cup. The primary idea of the Karma Cup is to include a chalkboard at the front counter where customers mark a box when using a reusable cup. After so many boxes are marked, a customer gets a free drink. 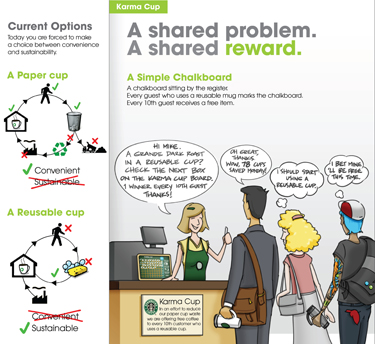 “What was really exciting about the Karma Cup was its simplicity, its approach that this is something we can execute on with relative ease,” Hanna says.

“It created a sense of community success, so that your success at getting a free drink really relied on your fellow customers there at Starbucks, and that store specifically.”

Hanna says the most impressive part of the betacup campaign was not just the brains behind the entries, but the amount that entrants modified their designs based on public feedback. Each design was posted on jovoto’s website during the entry process, and could be commented on and tweaked.

The collaborative, creative, and community nature of the betacup challenge—which, Hanna says, operations teams at Starbucks will study to determine which elements will be added to the company’s business model—is something Starbucks plans to use on future strategic development.

“The demographic of our customer base has always been one of involvement and … direct engagement with the company,” Hanna says. “So this is really a natural progression for us as a company to continue to engage our customers in creative ways to help shape what the company is going to look like and help shape our services.”

“If the consumer is part of the decision-making process up front, I think you … get a better opportunity to have success down the road,” he says.

By Sam Oches
News and information presented in this release has not been corroborated by QSR, Food News Media, or Journalistic, Inc.

Wayback President on Staying Safe, No Matter Your State’s Status
Emerging Franchise Revs Up Growth Despite Pandemic
Influencer Marketing and COVID-19: Can it Reinforce Customer Trust?

The Digital Journey Evolves at Qdoba
COVID and Digital Ordering: What Have We Learned?
How Panda Express is Taking Charge of Delivery

McDonald's Pauses Reopening as COVID Surges Nationwide
At Papa John’s, the Comeback is Just Beginning
Burger King Gets Back to Pre-COVID Sales