It's All About Relevancy in New TCBY Prototype

Industry News | June 7, 2010
As the frozen yogurt quick-service segment continues to crowd with competitors, veteran brand TCBY announced a new prototype store and logo that it hopes will help the company maintain relevancy with consumers.

Rolling out with the company’s first two corporate-owned stores, the first of which opens in mid-July in the chain’s hometown of Salt Lake City, the new prototype includes a modernized interior design and self-serve frozen yogurt offering. 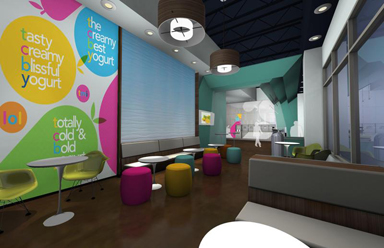 “The stores we open up are going to be really the new look, the new feel, the new design, and the new way that TCBY is going to celebrate community for the consumer,” says Timothy Casey, CEO of TCBY.

The new store design offers more of a lounge feel for customers, with vibrant colors and modern furnishings. The self-serve offering provides customers with their pick of 10–16 flavors of yogurt and a toppings bar, all of a which will be priced at 39 cents per ounce.

Rolling out with the new prototype is also TCBY’s new logo, which is more sleek and modern than the previous logo. The company will be including variations of the new logo on uniforms, signage, packaging, and marketing materials.

Casey says that while the brand has always focused on the community aspect of its stores in its 30-year history, the new prototype and design reestablishes its leadership role in a “place where it’s going to be very comfortable, very accessible, and very relevant with the consumer.”

“I think relevancy is everything that impacts the daily life of the consumer,” Casey says. “Certainly self-serve is a relevant component to the consumer’s day. … But relevancy is also much more than that. It’s the service they get, the environment they shop in.”

The new prototype will eventually be offered to existing and potential franchisees, Casey says, but the company is using the corporate-owned locations to perfect the new model first.

“At the end of the day, if it isn’t something the consumer loves, then we’re going to have to do some tweaks,” he says. “So this really gives us the opportunity to touch the consumer, do some consumer intercepts, talk to them, and find out the components that really do appeal to them.”

Only when the new prototype is exactly right, Casey says, will it be offered to franchisees.

“We know this is something that’s very appealing to [franchisees], and we know, based on our engagement with them, that we had to provide them a business model that was more than just the self-serve model,” Casey says.

Casey says that changing a 30-year-old brand is a risky move, but that TCBY’s plan will make the payoff worth it.

“Any time that you change what’s familiar to a consumer, there is some risk,” Casey says. “But I think we’re going to be really smart about this. [The stores] had a lot of consumer research done prior to, and we’ll continue to, once these two stores are open, fully engage the consumer.

“At the end of the day, they’ve got to take the driver’s seat. We can do what we like all day long, but if the consumer doesn’t like it, it won’t work.”

By Sam Oches
News and information presented in this release has not been corroborated by QSR, Food News Media, or Journalistic, Inc.

Popeyes' Next Act: Become a Global Icon
What Will Separate the Fast Casual Winners and Losers Post Pandemic
How Restaurants Can Tackle COVID's New Insurance Challenges

Will Meal Kits Have Lasting Power in Quick Service?
Meal Kits for Restaurants: Is it Worth it?
Restaurants Make the Quick Pivot to Off-Premises

Tom & Chee, and the Comeback of a Shark Tank Legend
Gyro Shack Preps for its Next Growth Chapter
Breakthrough Has Golden Chick Thinking Even Bigger

Welcome to the Shake Shack of the Future
How Drive-Thru Restaurants Can Thrive in the Age of Social Distancing
Yelp: Nearly 16,000 Restaurants Have Permanently Closed Due to COVID

How Tech Can Make Restaurants Pandemic-Proof
During a State of Flux, Restaurants Can Keep Innovating
Digital Becomes the Cornerstone of a New Dunkin'

Dickey’s CEO: Virtual Training Will Outlast the Pandemic
Potbelly is Resolving its Real Estate Issue
Why You Should Bet on Fast Casual After COVID-19