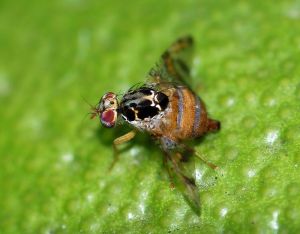 Since the initial find, more than 2,000 additional traps have been set out, and more wild flies have been detected. The flies have been found on traps in mango, loquat, and sour orange trees. This is the first major outbreak of the Mediterranean fruit fly, Ceratitis capitata, since the nine-county eradication program in 1997 and 1998.

The Mediterranean fruit fly (Medfly) is considered the most serious of the world's fruit fly pests due to its potential economic harm and threat to our food supply. It attacks more than 250 different fruits, vegetables, and nuts, including oranges, grapefruit, lemons, apples, guava, mango, tomatoes, and peppers. The flies' lay their eggs in the fruit, and the eggs develop into maggots, causing the fruit to rot. They then emerge as adults once the fruit falls to the ground.

Medflies breed continuously when host fruits are available. Population growth may be explosive, as females are capable of producing hundreds of eggs.

"This is a disturbing find," Bronson says. "We, along with our federal partners, are mobilizing all available personnel to the area to begin intensive trapping, and to address survey, control, regulatory, public information, and environmental monitoring. This is a dangerous pest and we will commit the necessary resources to control this recent outbreak."

The state and federal cooperative fruit fly program monitors more than 56,000 fruit fly traps across Florida. The traps are checked every 21 days, and in some high-risk areas, every 14 days. Monitoring of the Boca Raton traps was up to date when the flies were found.

To address the current outbreak of Medflies, additional traps are being placed in an 81-square-mile area around each positive find. Once the area of infestation is delimited, there are a number of tools and techniques available to control the outbreak. Appropriate control measures can be launched in short order. These include foliar spot treatment of host trees with Spinosad, an insecticide derived from a naturally occurring soil organism, and approved for use on organic crops. Other treatments include soil drenching and fruit stripping of infested trees. Another important tool is the sterile insect technique, a biologically based reproduction control method.

In 2002, a cooperative effort between USDA and FDACS Division of Plant Industry initiated the Sterile Insect Technique and Mediterranean Fruit Fly Preventive Release Program. Millions of sterile Medflies are currently released throughout high-risk areas of the state, and prior to the Boca Raton Medfly find, there had been no Medfly outbreak since the sterile release program began.

"The program to successfully eradicate the Medfly from Florida requires an all-hands-on-deck response from state and federal agricultural officials, as well as the public," Bronson says. "We must have the cooperation of the public to stop this destructive pest."

State and federal agencies will work with local governments to keep the public involved and to provide updated and accurate information. Visit the Department's website at http://www.doacs.state.fl.us/pi/enpp/ento/exoticfruitflies.html for maps of the infested areas and detailed information on the Medfly, or call the toll-free help line at 1-888-397-1517.

What Will Separate the Fast Casual Winners and Losers Post Pandemic
Tom & Chee, and the Comeback of a Shark Tank Legend
Potbelly is Resolving its Real Estate Issue

Is the Pandemic the Right Time to Invest in a Restaurant Franchise?
Opportunity Awaits for Franchisees Ready to Take a Swing
Why Jeremiah’s Italian Ice is One to Watch