When Panera Bread’s 1,500th store opens Tuesday, Feb. 7, it will be the company’s first location in Manhattan.

The brand ranked No. 13 on the most recent QSR 50 list, and it already boasts 90 cafes in the tri-state area. Analysts praise it for not just sustaining, but accelerating the fast-casual dining segment, and even competitors say they would like a Panera to open next door.

So what took so long for the brand to enter the country’s most populated city?

“For Panera, our model is around the suburban marketplace,” says Scott Davis, executive vice president and COO of the company. “So it took a while for us to get a sense of really how to go into an area like Manhattan. It can be daunting when you’re standing from the outside looking in.”

He says it was important to ensure that when Panera seared its name into Manhattan real estate, it was the authentic store, and “not some sort of scaled-down version,” that made its mark. 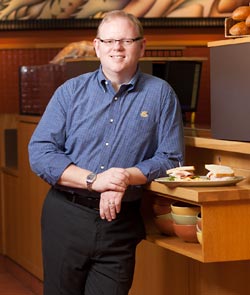 The key was breaking Manhattan into communities. “When you get to New York, what you realize is, outside of Times Square and the financial districts, it’s really just neighborhoods,” Davis says.

With an established neighborhood feel, New York’s biggest challenge was the dreaded real estate–the exact hurdle that kept established, moneymaking brands such as Target from settling into the city for so long, according to Gary Stibel.

“Manhattan’s tough! It’s tough finding good locations, it’s expensive, it’s competitive,” says Stibel, who has consulted for many names in the industry, from McDonald’s to Yum! Brands, and is now CEO of New England Consulting Group. “I’m not surprised at all [Panera] didn’t rush into New York first.”

“What’s harder for us is, our locations are a fairly good size,” Davis says. “They’re north of 4,000 square feet. It is also a bit of a difficult chore to find the kind of location where we can make the economics work in a place like Manhattan.”

The economics, in fact, worked in Panera’s favor; while the first Panera site, located at 330 Seventh Avenue, was originally intended for an opening later this spring, construction finished earlier than expected.

“What these guys have proven is that the economy does not stand in the way of a great concept,” Stibel says.

Panera’s arrival may come as a blow to rival fast casual concepts, from direct competitors such as Le Pain Quotidien and Pret a Manger, to other brands built around fresh fare.

“I think for the lunch business, there could be some form of competition [to our store], depending on [Panera’s] locations,” says David Kostman, founder and CEO of Mediterranean concept Nanoosh. Nanoosh has three locations in New York and one franchise in New Jersey, with 30-40 more stores planned in the next three to four years.

While a bakery-café such as Panera hardly encroaches on the audience at a Mediterranean restaurant, both Panera and Nanoosh focus on healthful branding and authentic, fresh, natural ingredients.

Kostman is quick to point out, though, that Panera will not be a destination dining spot.

“No one in Manhattan would enter a subway or take a cab to go to, honestly, a Panera or even a Nanoosh,” he says. “For concepts like Panera or Nanoosh, people will really go to those type of establishments if they are around the area.”

Stibel gives the edge to Panera. “Those competitors aren’t exactly setting the world on fire­–Pret a Manger, Cosi,” he says. “Those guys who will be the most direct competitors, it’s not like they’re doing that great right now. [Panera is] definitely going to take business from competition.”

The competition does not stop at other fast casual eateries, either. Panera’s concept has attracted mouths from multiple market segments, pulling in both quick-serve customers and diners who frequent the lower end of full-service establishments.

“That’s why they have helped to grow the fast-casual segment and sustain it during a recession, while others haven’t,” Stibel says.

Nanoosh’s Kostman is less convinced. He calls Panera a great concept, but says its dinner performance will likely be weak.

“At Nanoosh, we do more than 60 percent of our business in the evening and weekends,” he says. “But in the evening I don't think people will run to Panera in the city.”

Davis admits that only 25 percent of Panera’s revenue comes from visitors after 5 p.m., reinforcing the significance of the breakfast and lunch dayparts at the brand.

But both Stibel and Kostman easily admit Panera has a winning concept, thanks to its execution, branding, price points, and success rate.

“The’ve proven fast casual is alive and well, wherever they go,” Stibel says. “I think there’s a lot of pent-up demand for Panera.”

“Their brand is a very powerful brand, and they will definitely bring traffic and interest in an area,” Kostman says. “I would be happy if they opened next to us.”

By the end of 2012, Manhattan will be home to four Panera units. Rather than accelerated growth, brand executives emphasize that expansion plans must stay true to its mission statement.

“We do it one at a time and do it organically,” Davis says. “[It’s about] really getting a comfort level where we can do the Panera concept the way it was supposed to be done in Manhattan, and do it right.”