Schlotzsky's Goes All In With Cinnabon, New Look

Industry News | March 24, 2010
Schlotzsky’s unveiled a new prototype store and extended cobranding relationship with Cinnabon as part of rebranding efforts it hopes to use to almost double in size by 2015.

“When FOCUS Brands purchased Schlotzsky’s several years ago, we put together a five-year strategy to reinvigorate and grow the brand,” says Kelly Roddy, president of Schlotzsky’s. “Part of the growth strategy was to make the concept more relevant, [but] still kind of mom-and-pop deli style. 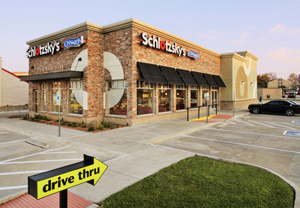 “You saw a lot of elements that you see in traditional fast casual, and we wanted something that was really different, something that really stood out from pretty much everyone else in the industry.”

Roddy says the brand incorporated signature Schlotzsky’s elements such as its fresh-baked bread and round sourdough buns as part of the new prototype design.

“We put all of those elements into our design … really highlighting the fun, the quirky,” he says. “We tell the story of fresh a little better in the restaurant, as well.”

Roddy says all future units will be the new prototype, while all existing restaurants will be reimaged with some of the new design elements. Eight new prototype stores are already open, 15 are under construction, and 60 are planned to open by the end of 2010.

The relationship with FOCUS Brands sister chain Cinnabon, which was originally signed in October, now includes 51 open cobranded locations and 31 that are being converted into a cobranded unit.

It has been such a successful relationship, though, that Schlotzsky’s announced it plans on opening all future units as Cinnabon-cobranded units, except for those too close to an existing Cinnabon store.

“We were pleasantly surprised to see how customers gravitated toward the Cinnabon, and how they complimented each other,” Roddy says, noting that Cinnabon’s sales have not cannibalized the sandwich chain’s treat and dessert sales. “All of the research we’ve done on it so far has shown that it actually boosts the Schlotzsky’s sales.

“It’s really a win-win for both brands, and it makes a lot of sense for the franchise partner from a unit-level economics standpoint, because they’re paying one rent, one manager’s salary, [and] overhead is pretty much the same for being able to run two concepts.”

Roddy says Schlotzsky’s and Cinnabon will work on marketing and merchandising for its cobranded units together.

But Schlotzsky’s, Roddy says, will maintain the same personality it has kept up for nearly 40 years.

“When you walk into a restaurant, it’s definitely still a Schlotzsky’s,” he says. “[Cinnabon is] like an added bonus.”

By Sam Oches
News and information presented in this release has not been corroborated by WTWH Media LLC.