Souper Salad, Inc. has recognized Bryan and Krista Cromar with the company’s top franchise honor: Franchisee of the Year. The couple opened its first Souper Salad in Meridian, Idaho, in 2008 and have plans to expand in the Boise area with two additional units.

The Cromars have long been advocates for healthy fare. Souper Salad was the Cromars favorite quick-serve spot when both were completing their degrees at Arizona State University. 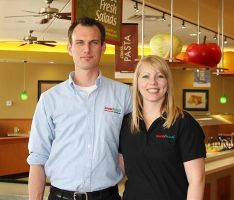 “The Souper Salad was just down the street from us, offered fresh, healthy options, and was priced right because money was tight,” Bryan says.

The couple left Arizona in 2002 and moved to Boise, Idaho where Bryan, a mechanical engineer by training, had been offered a job in the semi-conductor industry. Krista whose degree was in business, took a job in merchant services.

But both missed their Souper Salad. When they learned that Souper Salad was franchising stores in Idaho, the Cromars looked into the opportunity and approached Krista’s dad to partner with them.

They attribute the success of their store to Souper Salad’s blueprint for success, their focus on satisfying each customer, and their great crew.

“Souper Salad wasn’t a known concept in the Boise area, so the menu surprised first-time customers," Bryan says. "Our biggest satisfaction has come from customer referrals and a very loyal customer base. We have retirees and business people who stop in for lunch and a lot of families on weeknights and weekends.”

Although he grew up in California, Bryan visited his uncle, who owned a family restaurant in Columbus, Ohio, every summer. “My uncle made us feel special each time we walked into his restaurant. He was very warm and welcoming. He would stop by our table and talk to us, and I loved going there. Krista and I are trying to bring that feeling of family friendliness to our Souper Salad here.”

In supervising the operations, inventory and costs while building a great crew and customer base, the Cromars have been guided by the advice from Souper Salad district manager Jeff Farnell, a 30-year veteran of the restaurant industry.

“We had never worked in a restaurant but we were given the tools and professional support from Souper Salad that have helped us become successful," Bryan says. "We have also been open to suggestions and implemented changes to improve our daily operations.”

According to Souper Salad CEO Tim Taft, “The Cromars are young, energetic, and have implemented our blueprint for success in an exceptional way. Their total performance was the key to being named Franchisee of the Year.”

For the Cromars, owning a successful Souper Salad franchise has offered a career path that is both healthy and gratifying. As a give back to the community, they donate certificates of achievement to the local library district for kids who achieve a certain reading level and then are awarded free Souper Salad meals. The program has been well-received in the community. They also offer half-price meals to law enforcement and firefighters.

“We weren’t the highest grossing store so it’s not just about profitability," Bryan says about being named Franchisee of the Year. "I think Souper Salad appreciates our work ethic, commitment to our customers, the cleanliness of our store, and our crew. We’re excited about the future and growing our business in the Boise area.”

Shake Shack is Back on the Growth Path
Even in Pandemic Times, Slim Chickens Isn't Slowing Down
The Digital Journey Evolves at Qdoba

COVID and Digital Ordering: What Have We Learned?
How Panda Express is Taking Charge of Delivery
How Panera Reached Guests Through Augmented Reality

How Marketing is Changing for Quick-Service Restaurants
Influencer Marketing and COVID-19: Can it Reinforce Customer Trust?
Consumer Emotion Drives the Future of Post-Pandemic Restaurant Marketing

Wayback President on Staying Safe, No Matter Your State’s Status
Emerging Franchise Revs Up Growth Despite Pandemic
The 4 Components of a Successful Delivery Program

McDonald's Pauses Reopening as COVID Surges Nationwide
At Papa John’s, the Comeback is Just Beginning
Burger King Gets Back to Pre-COVID Sales