The California-based brand is testing out a nontraditional way to deliver its pretzels to people.

In the ever-growing off-premises space, brands are becoming more and more creative when it comes to getting their products into consumers' hands. Shifting to a model where delivery and carryout experiences are just as important as dine-in business is essential for restaurants. However, integrating delivery into a restaurant doesn’t happen overnight.

With a growing number of third-party services, delivery fees, and to-go packaging, restaurants are experimenting with different ways to successfully meet that demand. There’s not a perfect, one-size-fits-all approach.

Some brands partner with one vendor, offer a limited menu, and that’s the end of the process. Other chains, like Wetzel’s Pretzels, are taking the time to develop a platform that not only delivers the product but creates a whole new experience for the customer.

Wetzel’s is an established brand that has been a staple in malls over the past 25 years. In order to compete with other restaurants and give consumers more access, the company has opened in non-traditional locations. Now the California-based brand is testing out a non-traditional way to deliver its pretzels to people. 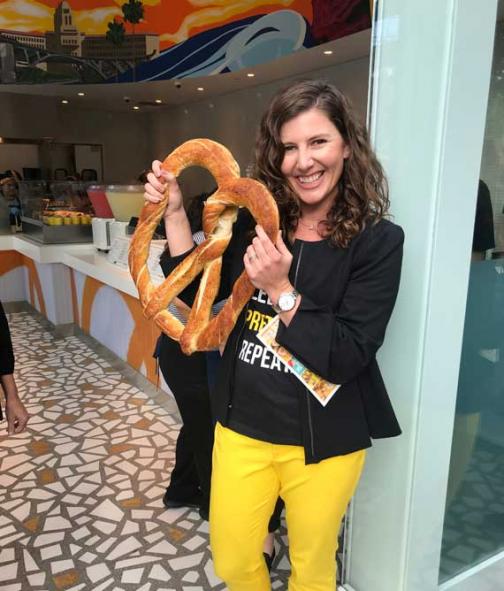 “For us, the bulk of our stores are in malls, but we do have a really good proof of concept outside of malls in non-traditional venues,” Wetzel’s new CEO Jennifer Schuler says. “We're in Disneyland and Disney World, Dodger Stadium, Staples Center, and the Santa Monica Pier. So, we have proof of concept in entertainment destinations and tourist locations. We know that this works outside of malls.”

Last week, Wetzel’s announced a partnership with Kitchen United, a ghost kitchen, to begin developing a delivery program for the company.

Schuler thinks this is the perfect time for Wetzel's to get into delivery.

“It's amazing to see how quickly delivery is growing and how big of a business it’s becoming,” she says. “The stat that really hit me is like that 86 percent of customers are using delivery services at least once a month, and they're increasing about 20 percent per year.”

By working with an incubator like Kitchen United—that’s just a short walk from Wetzel’s headquarters, Schuler notes—the brand can find out what truly works best. From packaging and consumer demands to delivery partners, this process allows the company to ask a lot of questions and experiment in order to answer them.

“We have a big enough brand out there that it’s something consumers might crave,” Schuler says. “They might want a Wetzel's on a Friday night without having to take a trip to the mall or take a trip to Downtown Disney. To me, it was the right time and the right partner to incubate delivery and figure out what does this mean for us.”

Through Kitchen United, Wetzel’s can test all delivery services—Postmates, Uber Eats, DoorDash, Grubhub, etc.—to see what fits, but to also see where customers are actually ordering from.

“It gives us some good insight into those different potential partners going forward,” Schuler says. “There's a big wave of delivery and it's only going to get bigger. It was the right time and the right way for us to insert ourselves into it so that we could learn what our consumers are looking for and do it with a great partner in Kitchen United.”

There’s no specific timeline for a systemwide delivery launch, but Schuler says the testing will continue in California for at least the next six months. Schuler isn’t committed to having the company stick with one method for delivery. If it turns out that Wetzel’s customers are ordering primarily from one service, it might be an opportunity to consolidate resources and launch an exclusive partnership, but it’s way too early to think about that since the testing just launched, she says.

“Kitchen United is a ghost kitchen so they integrate with as many partners as possible to maximize the number of customers they reach, and this is a way for us to partner with all of them and really see where our customer base tends to order,” she says.

So far, Schuler has been impressed with the different advantages using a ghost kitchen offers. The company is able to experiment with operational processes and develop new menu items geared toward delivery. The incubator model allows Wetzel’s the flexibility to experiment with food items that guests wouldn’t see in the traditional locations.

“We have some underground menu ideas, which we expect to be launching here at Kitchen United once we get our operations fine-tuned and our baseline established in the next month or two, we have some very millennial targeted menu items—things that are more foodie and that take a higher level of food prep and skill—something that would be harder to do in a really busy store. It’s something that you could do [in a ghost kitchen] that’s more handcrafted and high end.”

During an innovation day, Wetzel’s brought in social media influencers to see how they interacted with the product and the flavors they were excited to top their pretzels with. Think horchata, matcha, or spicy Cheetos, Schuler says.

“There's a lot of cool ideas of what you can top on a pretzel so they’re very instagramable and also very tasty,” she says. “[The ghost kitchen] allows us to be an incubator for that type of creativity.”

The testing is already showing some interesting trends. Average checks are considerably higher in the delivery space and more customers are ordering at night. Schuler says the orders are bigger and are almost like catering-style orders to fill a need for food at birthday parties or office meetings.

Wetzel’s is developing party packs and other bundle options in order to cater to these new demands.

“The way we're thinking about this project is within the broader scope of the mantra we have here about how do you bring pretzels to the people,” Schuler says. “There's no reason that this company can't have a whole plethora of channels for people to get access to a product and a brand they love whenever they crave it.”

One of the possible outcomes of this test could be a continuous partnership with Kitchen United to carry out the delivery operation. The ghost kitchen has plans to open 14 more locations in 2019 and Schuler says the partnership could extend beyond California if they continue the partnership.

“If we could build a model that works for us I would love to continue participating with them,” she says. “They're on a pretty good growth path. It certainly is a way to make the build out more affordable, the rent more affordable, and still capture the sales.”

Another outcome could be the use of ghost kitchens and a system that allows franchisees to offer delivery without hurting profitability.

Schuler is a Wetzel’s franchisee herself. It has given her a new way to look at the company, she says.

“My goal is always to build profitability for our franchisees year over year,” she says. “I would love to find a way to choose a delivery partner and create a delivery menu for them that I think will optimize their profitability. That would certainly be the Holy Grail coming out of this test would be to launch across all of our franchise locations. But to know that what we're delivering is a menu that will build profitability for franchisees. Now that I'm a franchise I've got to think about it in that way. I want those tests to go well.”