The 10 Most Downloaded Restaurant Apps in June

How are recent promotions moving the needle?

Outside Insights | July 12, 2021 | Adam Blacker
McDonald's
In July, for the first time ever, McDonald’s will launch a loyalty program

For the second month in a row, McDonald’s had the most downloaded quick-service restaurant mobile app in the U.S. 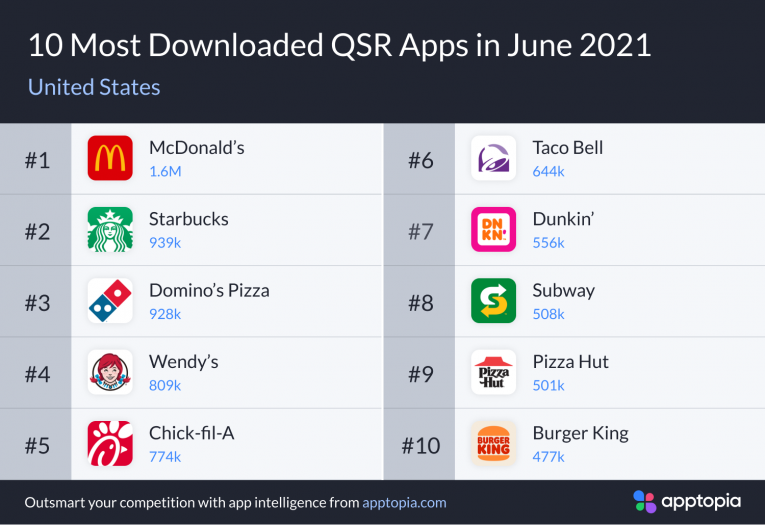 Downloads are net new installs of the app onto someone’s smartphone, so when talking about download performance, we’re measuring the number of new users coming to a brand’s mobile app. On average, we look at our smartphones about 80 times per day. This is why brands clamor to have us download their app. Once installed, they have prime mobile phone real estate on our most personal device. It helps keep the brand top of mind, deepen familiarity, and maybe even generate a little bit of loyalty.

The 10 most downloaded quick-service restaurant apps in June combined for 7.7 million new installs, compared to 8.7 million last month. A 24 percent drop in McDonald’s performance was a large contributing factor as the app had a strong back off the back of its promotion with pop boy band, BTS.

As a grouping, June’s top 10 apps were downloaded 5.7 percent less year-over-year. Wendy’s was most improved with an increase in June downloads of 136 percent while Subway had the largest decrease at negative 50 percent. Even with Wendy’s ability to attract new people to its app, keeping them as active users is not to be taken for granted.

During the month of June, Wendy’s increased its downloads but its user review sentiment for the month was poor when compared with other burger joints in McDonald’s, Burger King and Dairy Queen. Apptopia analyzes and measures ‘intent’ when a user leaves a written app review. The top three categories of intent for Wendy’s in June were Performance & Bugs, Payment and Design. Many times people will leave app reviews that speak generally to the company or its food but these intent categories speak specifically to issues that people are having with the app itself.

Each review also gets tagged as Positive, Neutral, Mixed or Negative. 52.4 percent of the reviews left for these intent categories were tagged as negative. In reading through these negative user reviews, it was clear many people were having errors when trying to login, use a coupon or even just finalize and place their order. This is money lost for the company if people cannot place their orders. The good news is these things can be fixed and if so, user retention will increase.

Circling back to McDonald’s BTS meal, the campaign did not have as great of an impact on new users coming to the McDonald’s app as a promotion late last year did where the company gave away free food. Generally speaking, free food is the best bet for a quick-serve to convince people to download their mobile app. The best part is, this is typically a more cost-effective campaign than paying big money to a celebrity.

Throughout the month of June, any new user to the Wendy's Rewards app was able to get a free 10-piece order of chicken nuggets with any purchase. This resulted in a 36 percent boost in month-over-month downloads for Wendy’s, good enough to move the app into the No. 4 spot, up from the No. 7 spot last month.

The home of the Whopper, Burger King, climbed its way back into the top list this June, after having slipped to No. 11 last month. It displaced Chipotle, which was #9 last month and sits at No. 13 this month. Burger King was able to attract more downloads in June through a promotion where it gave a free Whopper to those customers purchasing its Ch'King sandwich.

In July, for the first time ever, McDonald’s will launch a loyalty program. Loyalty programs are typically a big boost for app performance as the app acts as a natural wallet and tracker of loyalty points and rewards. The program will enable customers to unlock free food by collecting 100 points for every one dollar spent on qualifying purchases. When people sign up they will get 1,500 points after their first order using MyMcDonald’s Rewards. The rewards can then be redeemed on the next order. I’m looking forward to tracking and reporting the impact the launch of MyMcDonald’s Rewards will have next month.