March downloads of its app soared 767 percent over February.

The top 10 quick-service restaurant apps in the U.S. in March were downloaded 9.5 million times, 17.9 percent more than those the month prior. Year-over-year in the month of March, downloads of the top 36 quick-serve apps were up 13.4 percent. A download represents a new user and the first conversion on the mobile app customer’s journey. Apptopia only estimates first-time downloads and re-downloaded are not taken into account. 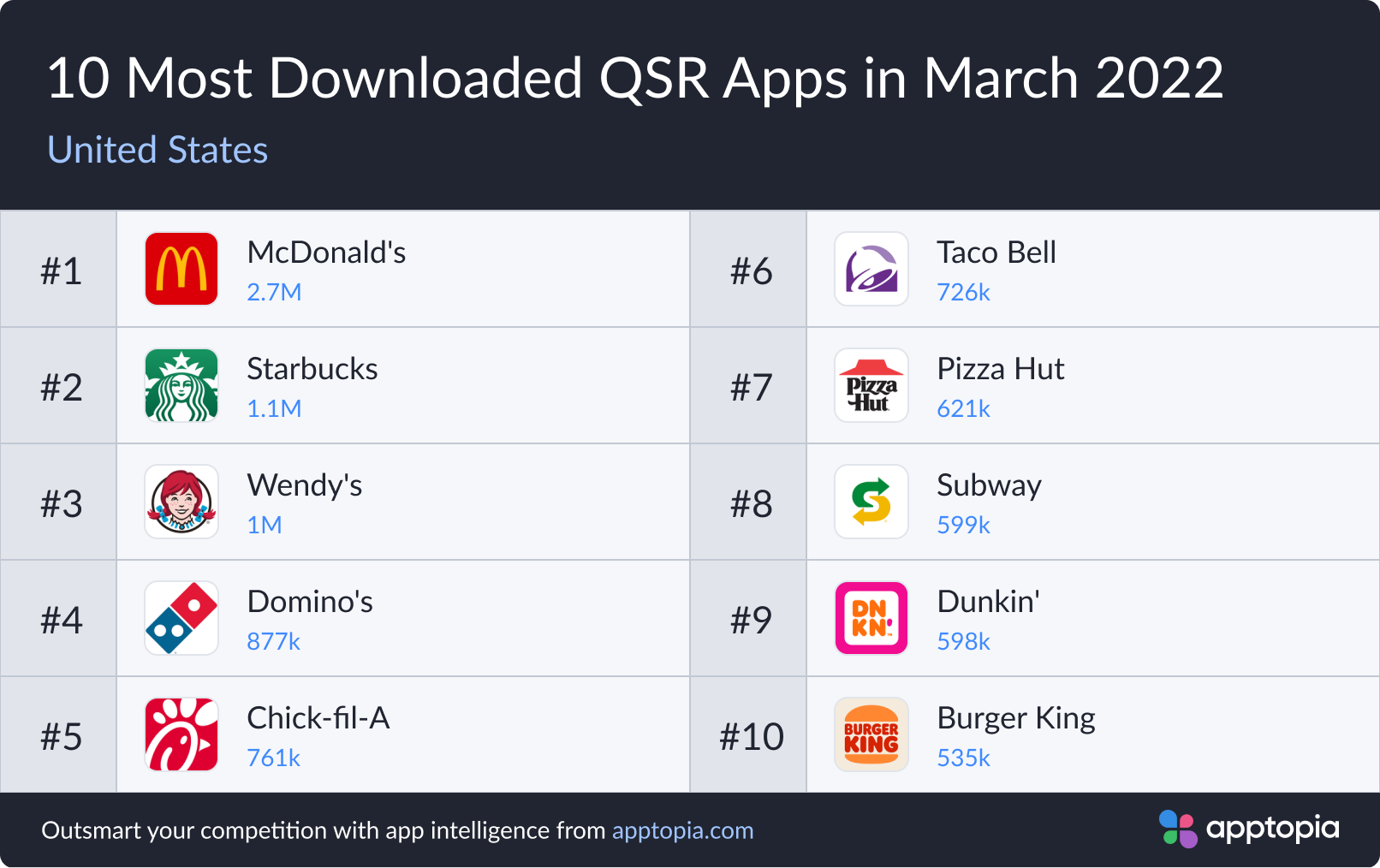 The biggest movers within the monthly top chart were Wendy’s and Subway. Wendy’s jumped up five spots from No. 8 to No. 3, while Subway came up three spots from No. 11 to No. 8. KFC was No. 9 last month but fell off our top chart all the way to No. 19 this month, while Little Caesars also dropped off our chart, landing at No. 13. Typically, month-over-month movements for quick-service restaurant app downloads are not about anything a brand is doing poorly, but what promotions their competitors are executing on and the success of those promotions are having. A baseline downloads for these apps, absent of special offers, naturally has a lot to do with numbers of locations and general brand awareness.

Keep in mind that while these monthly articles talk about acquisition, retention plays an equally important role for growing a mobile customer base. Both the type of promotion and the app experience play a role in retention. I hope to touch on these important subjects in the months ahead. We mentioned Wendy’s and Subway, but Tim Hortons and Blaze Pizza also had big months. Let’s find out what worked to drive new user acquisition.

With a million new installs, Wendy’s realized a 102 percent gain over February’s numbers. This coincides with the company being a very visible sponsor of the NCAA basketball tournament. It decided to go all in on mobile, only allowing its biggest promotions to be had via its app. Its television commercials made a point to direct people to the app, unlike a recent promotion from Burger King, which did not result in as many new app users. These promos included letting app users know they could get a $1 hamburger and half off all breakfast orders. A bigger move the product team made was within the app itself, finally enabling Apple Pay for iOS users. I’m guessing the company had been reading its own user reviews where I’ve seen plenty of customers having issues with, or just annoyed at, entering their credit card information. A smaller number of reviews even requested Apple Pay specifically. Subway also had a March Madness promotion, Subway offering a $5.99 footlong sandwich for app and online orders. Subway grew its monthly installs by 30 percent.

The largest month-over-month riser within the top 36 quick-service restaurant apps was Tim Hortons, or as I call it, the “Canadian Dunkin’.” Even with 145 percent month-over-month download growth, this is an app that never makes it into the top 10, but this has a lot to do with location numbers in the United States and stiff competition from Starbucks and Dunkin’. The same goes for Dutch Bros. which has had spots of success that I’ve reported on before. New users came to Tim Hortons app to participate in the franchise’s “Roll Up to Win” promotion. Users earned one digital Roll for every eligible menu item purchased when scanning for Tims Rewards using their Tim Hortons app.  The prize opportunity was enticing, giving away a car, tech products and tropical resort stays.

To celebrate Pi Day on March 14, Blaze served up a discounted $3.14 build-your-own 11-inch pizza. It was the ninth consecutive year of the promotion, which helps fans know to expect it. The offer had to be unlocked within the app (for rewards members only) in order to get the deal. This helped boost March downloads of the app 767 percent over February. 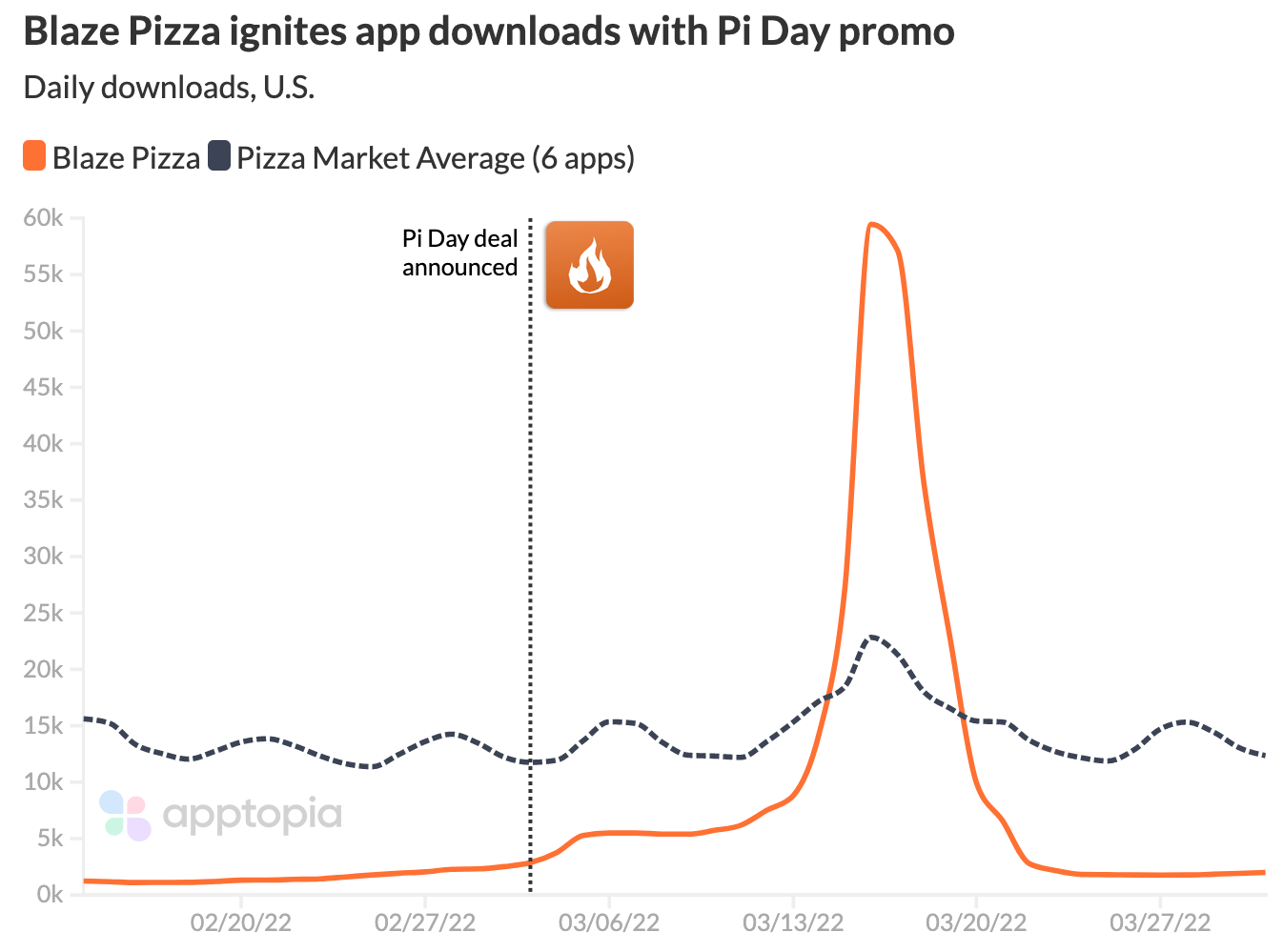 On March 14, the Blaze Pizza app was downloaded more than any other top pizza app (Domino’s, Papa John’s, Papa Murphy’s, Little Caesars and Pizza Hut). Moral of the story is that sometimes you can out-pizza the hut. Looking at baseline daily downloads, Blaze normally produces the second least out of this grouping. Downloads this Pi Day were the most for any of the franchise’s previous Pi Day promotions, beating its previous high in 2019 by 22.5 percent.