Breaking Down the Virality of Starbucks' Philadelphia Crisis

How one employee, one person, and one decision momentarily sunk the mighty Starbucks ship.
Outside Insights | June 2018 | Lee McNiel

Starbucks ended up closing more than 8,000 stores for an afternoon of racial-bias training on May 29.

When you discuss things in terms of speed, you generally hear this age-old cliché: The speed of sound. You know when you hear that, something was moving outlandishly fast. So fast, no one could stop it, no one could catch it; no one could see it—whatever “it” is—coming.

Enter Starbucks: more specifically, the Starbucks located at 1801 Spruce Street in Philadelphia. What happened here was a case of virality on an epic scale. To bring you up to speed or remind you of the situation at hand that started a ripple effect that was seen, heard and shared by thousands at the speed of social, it unfolded as follows:

On April 12, two African-American men had the cops called on them, and were forcibly removed from the establishment in handcuffs. These two men said they were simply waiting for a friend to arrive when they were denied access to the bathroom, and then were asked to leave by the store’s manager.

@Starbucks The police were called because these men hadn’t ordered anything. They were waiting for a friend to show up, who did as they were taken out in handcuffs for doing nothing. All the other white ppl are wondering why it’s never happened to us when we do the same thing. pic.twitter.com/0U4Pzs55Ci

This manager then called the police, and when the police arrived, onlookers took to their social media accounts and one even filmed the entire interaction. Melissa DePino was there when this debacle went down, and was one of the people at this Starbucks that took to social media. But instead of merely live-tweeting her take on the event, she recorded the video and tweeted it out to her 11,800 followers. As one could assume, people were outraged from every angle.

Over the next few days, the video picked up steam, and has racked up nearly 170,000 retweets to-date. Protests erupted outside of this Starbucks and many other across America, and people continued to voice their opinions, concerns, questions and sheer outrage on social platforms and review sites.

Once this situation became too large and globally known to avoid, Starbucks publicly owned up to the missteps and mishaps that occurred at this location. They addressed where they went wrong, and gave their plan of action to ease the mind of previous customers who may have been boycotting the brand while sitting on the wayside, waiting to see how the coffee conglomerate would respond.

While the steps Starbucks took in crisis management mode were admirable, they could’ve been entirely avoided. Sometimes it’s not an entire branch of your company that puts your entire reputation at risk; sometimes it’s not even a department at that branch. In the case of Starbucks, it took one manager’s poor decision and one mobile device to capture it.

This time, it happened to a large corporation with a legal team, advisers and investors on hand for guidance in handling this crisis. However, it took one employee; one single person, and one decision to momentarily sink the mighty Starbucks ship. 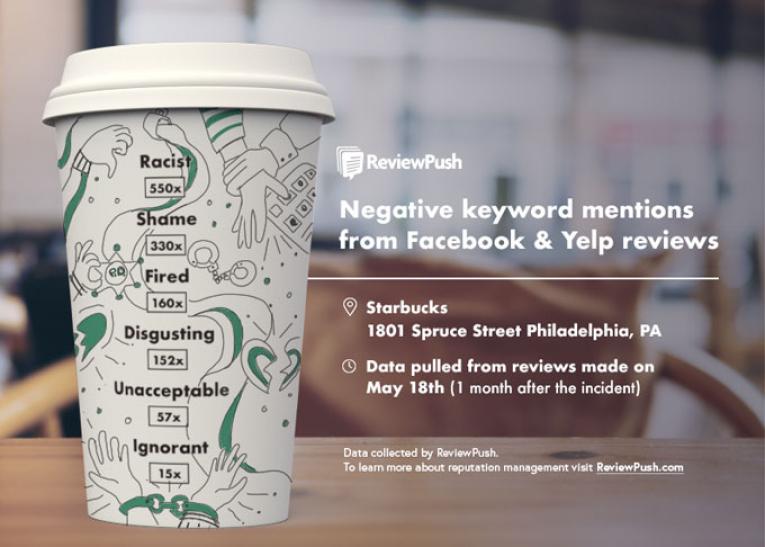 The reviews and recommendations—or lack there of—that were left on the Facebook page for 1801 Spruce Street didn’t embody kind sentiments, either. With Facebook’s new rating system, anyone can easily see the keywords most frequently seen throughout their various reviews. In their case, they ranged from, “unacceptable” to “racist” and “disgusting.” Yes, they’re a corporation, and even their reputation suffered from this occurrence.

In the age of digital where social media is everywhere we are at any hour of the day, nothing is sacred, and there is no such thing as keeping situations that may bring “bad press” under wraps; not anymore, at least. With consumers feeling more entitled and socially vigilant than ever, it takes one mishap, one tweet regarding your business in an ill-mannered fashion to send your company spiraling out of control.

Though it’s often times best to think on the bright side of things, to ignore the possibility that your business or brand could undergo a similar experience could be a huge disadvantage down the line. Get prepared now, so that if the time comes where you have to step up to defend your reputation, you have all the tools in your hand to do so effectively, efficiently, and empathetically.

Lee McNiel is the CEO and Founder of ReviewPush in Austin, Texas. ReviewPush is an online review management software company that focuses heavily on the fast casual industry and helping restaurants manage their online reputations.