Outside Insights | December 13, 2021 | Adam Blacker
Adobe Stock
Cryptocurrency is new in the world of quick-service restaurants.

The top 10 quick-service restaurant apps in the U.S. in November were downloaded 9.6 percent more than those the month prior. With 9.7 million new installs across the grouping, it is the top month for the ranking since we started tracking in May of this year. As usual, McDonald’s is a large driver of how well the top 10 apps perform each month because it is by far the most downloaded and launched app each month. 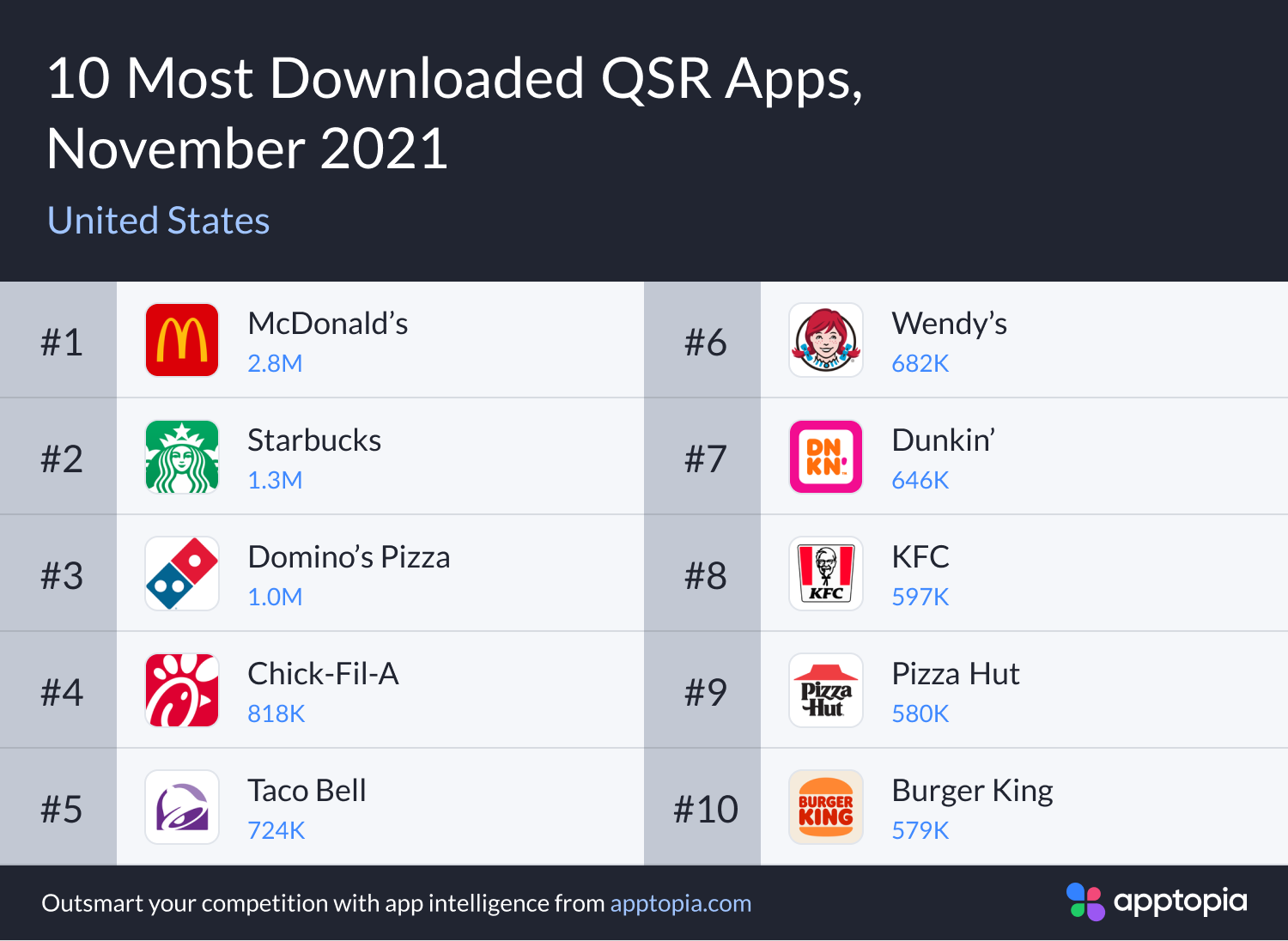 Compared to last month, this month saw Dunkin’ drop three spots and Pizza hut fall two spots. Chick-fil-A and Taco Bell each rose one spot in the ranking while Wendy’s got back on the board, rising from No. 13 in October to No. in November. Wendy’s had a whole host of promotions last month including giving customers a free menu item every Friday with the purchase of fries via the mobile app.

The biggest change here is KFC, which makes an appearance in the top 10 for the first time. The KFC app only launched in the US in February of this year, even though it was available in other countries like Germany and India since 2014. The app has ranked anywhere from No. 15 to No. 19 since debuting but made its way up to No. 8 for the month of November.

The launch of Quick Pick-Up spurred people to download the app. It encourages customers to order via the app, park in a designated area, and come into the restaurant to grab their order off the shelf. This is very similar to how Sweetgreen, Chipotle and others handle online ordering. KFC was determined to launch this feature in order to reduce growing congestion in its drive-thru lines. To incentivize customers to trial the new feature, KFC provided free food and discounts with the purchase of another menu item.

In addition to understanding the most downloaded quick-service restaurant apps on a month-by-month basis, it’s helpful to know what the fastest growing ones are from a month-over-month perspective. Oftentimes the fastest growing brands are the ones who did not or never will show up on the top 10 ranking. But outside of Little Caesars, which is planning a massive expansion, that is not the case this month.

A side of cryptocurrency

The most interesting app promotion last month definitely came from Burger King’s partnership with retail investing app, Robinhood. The brand announced a promotion on November 1 in which loyalty program members who spent $5 on any food item could get a side of a cryptocurrency in their Robinhood account. This resulted in strong download activity for the Burger King app. New installs increased 30 percent over the duration of the promotion compared to the same period in October.

The promotion is really no different than other promotions in that it is giving away value to consumers in exchange for giving the business an opportunity to earn more of their business. However, this specific promotion grasped the moment and pounced on it, aligning itself with a certain part of the popular culture.

Cryptocurrency is new in the world of quick-service restaurants, which helps differentiate the brand from its competitors with very similar menus. The funny thing is this is actually not the first time Burger King has dabbled in cryptocurrency. In 2017, it was ahead of the curve, releasing Whoppercoin in Russia. The coin is still tradable but clearly forgotten. Outside of being relatable to your customers, offering them convenience is key, which is why I’m still on the lookout for more brands to integrate with Apple CarPlay and/or Android Auto.