First, Taco Bell turned the burrito on its side with the launch of a new breakfast menu, and now, traditional morning daypart chains Dunkin’ Donuts and Starbucks are looking to extend their bite to the much-larger lunch slice. Although Dunkin’ has been after the coffee-drinking market that makes up the largest piece of Starbucks’ revenue, and Starbucks for years has served pre-made or heat-and-eat fare, both brands are looking to increase food sales revenue and chip away at Panera Bread’s market share. Starbucks’ latest quarterly earnings, where it reports a 23 percent profit increase bolstered by more food sales, signals the chain may be seeing early signs of success with this strategy.

Lunch can be both a more lucrative and more competitive market. According to the consumer insight data collected at CivicScience, 54 percent of U.S. adults eat lunch away from home, with 23 percent eating out for lunch regularly and 31 percent packing their lunch. Compare that to breakfast, where the data find that only 20 percent of U.S. adults say they eat breakfast away from home.

As Dunkin’ and Starbucks invest in new and expanded lunch menus and marketing, they probably already have a pretty good sense of their customer and brand loyalist. But to compete in the red ocean of lunch, both will need to persuade consumers away from both incumbents and successful newer entrants. Institutions like McDonald’s, Burger King, and Wendy’s are working feverishly to reclaim mindshare and grow revenue through new offerings (for example, Wendy’s is testing a build-your-own sandwich option). McDonald’s has even gone so far as to give Ronald a makeover this year. Meanwhile, fast casual successes seen in Chipotle, Five Guys Burgers and Fries, and Panera put even more pressure on the players in the lunch space.

To compete in the red ocean of lunch, both will need to persuade consumers away from both incumbents and successful newer entrants.

It doesn’t help that CivicScience has found only 7 percent of consumers said they would be “very likely” to try a lunch menu at Dunkin’ Donuts, and 11 percent said the same for Starbucks when asked about the possibility of more lunch menu options being offered there. The majority of respondents to each question (68 percent for Dunkin’ and 63 percent for Starbucks) said they are “not at all likely” to try the lunch menu at either restaurant.

So where will those chains find the persuadable lunch diners? Who are those diners, and what makes them tick?

A consumer insights study conducted by CivicScience aimed to reveal some of those answers, which marketing teams can potentially use to take action. The organization looked only at the respondents who said they are “somewhat likely” to try lunch at these restaurants and, using data science techniques, identified where those same respondents had statistically meaningful differences on a wide range of topics when compared against the general U.S. population. Here’s what can be learned from the study: 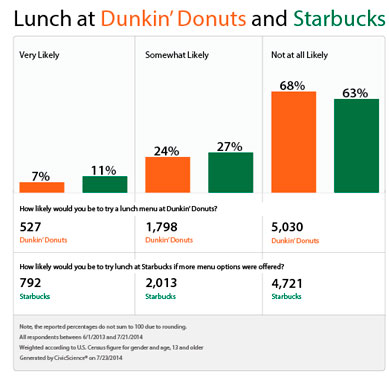 What they have in common

While these segments seem to be quite different, they do have a few interesting things in common when compared against the general U.S. population. When given the choice, both potentially persuadable groups are much more likely to say they would rather be “extremely attractive” versus “highly intelligent” or “extremely lucky.” Also, both segments are much less likely to make lifestyle changes that benefit the environment.

More data about each of these potentially persuadable diners is available from CivicScience, and it can be put to use by marketing and research teams as they strategize, launch, and measure new campaigns. For example, Dunkin’ can focus its offerings and campaigns on menu diversity, choice, and perhaps customization, and may not need to consider healthfulness in its creative. TV advertising, especially during sports programming, seems like a strong channel, while social media may not yield as much. For Starbucks, the brand may want to think about “indulge” and “splurge” as message themes, and think about fashion tie-ins, using social media much more to reach this consumer group.

In the very crowded and fiercely competitive lunch market, these chains will need every research and strategy advantage they can get to reach beyond their brand loyalists.

Note: Dunkin’ Brands Group and Starbucks did not participate in the featured polling questions or the development of the report.

Jennifer Sikora is the vice president of marketing at CivicScience Inc. CivicScience collects real-time consumer research data via polling applications that run on hundreds of U.S. publisher websites, cycling through thousands of active questions on any given day. Using cookie technology, CivicScience builds psychographic profiles of these anonymous, opt-in respondents over time.