The number of mobile orders is only increasing industrywide.

Outside Insights | September 15, 2022 | Adam Blacker
Sonic Drive-In
Sonic has now made the top chart four months in a row.

The top 10 quick-service restaurant apps in the U.S. were downloaded 10.3 million times in August, 14.8 percent less than those the month prior. Year-over-year in the month of August, downloads of the top 36 quick-service restaurant apps are up 18.9 percent. A download represents a new user and the first conversion on the mobile app customer’s journey. 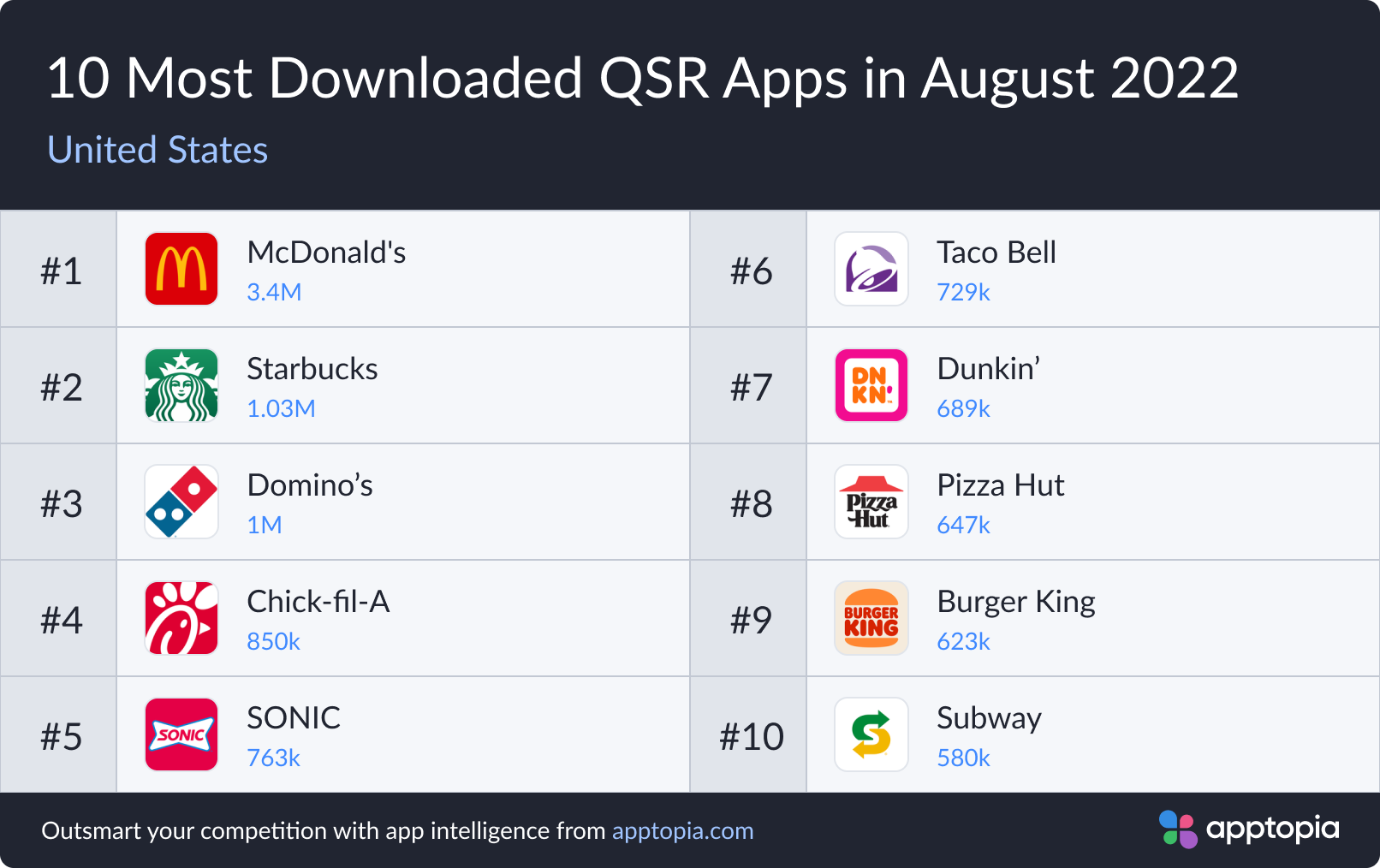 While the order has changed, every one of July’s 10 most downloaded quick-service restaurant apps have returned in August’s lineup. Dunkin’ moved up two spots from No. 9 to No. 7, very likely due to the release of its pumpkin spice flavored drinks and treats. Sonic has now made the top chart four months in a row, something we have not seen before. Before its four-month run, its last appearance on the top chart was almost a year ago, in September 2021. Sonic has engaged in a handful of app promos which you can read about in the July and May columns. Most recently, it brought back its pickle juice slush, allowing those ordering it through the mobile app to get the drink at half price.

Looking at the top 36 apps, Arby’s grew its month-over-month downloads the most in August at 10.6 percent. This is a low percentage because it was a down month for quick-serves, the growth leader is typically north of 25 percent. Arby’s did not do much geared toward the mobile app but did launch a new meal (Loaded Mac ‘N Cheese) and bring back a fan favorite for a limited time (Prime Rib Cheesesteak).

In looking through the Arby’s app user reviews, I don’t think the people who recently installed the app are going to be staying around. Apptopia tags each review with one or more “intents” and the two most common for Arby’s in the month of August are Performance & Bugs and Payment. It’s clear from reading the reviews and looking at the most used keywords that the in-app offers and coupons are not able to get applied to orders, leaving users little incentive to continue being loyal. Fixing this, and letting your users know it’s been fixed, should be the app team’s top priority.

Arby’s isn’t the only quick-service restaurant app with issues, though. There are plenty that have glitches causing ordering headaches for customers. Customer expectations for mobile apps these days are high, especially with so many brands telling their customers to download them via advertisements and in-store. The number of mobile orders is only increasing, making the mobile app your brand’s de facto storefront. The digital world’s competitive landscape is different in that you can more quickly and easily lose customers. Before they ever hit the road to pick up their order, it’s very easy to make a couple of clicks into a competitor’s app and order there instead, where they might have a better experience.