Quick-service brands are making a lot of progress in the category.
Outside Insights | February 2020 | Ted Marzilli

Fast food treats non-meaters with a lot of care these days.

Once upon a time it seemed like vegans and vegetarian options were banished to a small corner of the fast-food menu. But with the sudden explosion of plant-based meat substitute options on fast food menus across the country, it feels like everyone can get something to eat.

But how’s the quality?

According to YouGov BrandIndex data—which tracks the health of thousands of brands every day—Subway and Chipotle earn the highest marks for Quality among vegetarians and vegans.

For years, Subway has positioned itself as a healthy alternative to the a burger and fries, so it’s no surprise the chain is high on this list. However, it’s not lacking in competition from other restaurants serving healthy options and meat alternatives.

One of those competitors is Chipotle, which has put significant effort into crafting its menu for those on diets such as Keto and Paleo, Whole30. In 2019, it rolled out its "Plant-Powered" Lifestyle Bowl options and in the month of October, offered perks for those customers who participated in Meatless Monday. 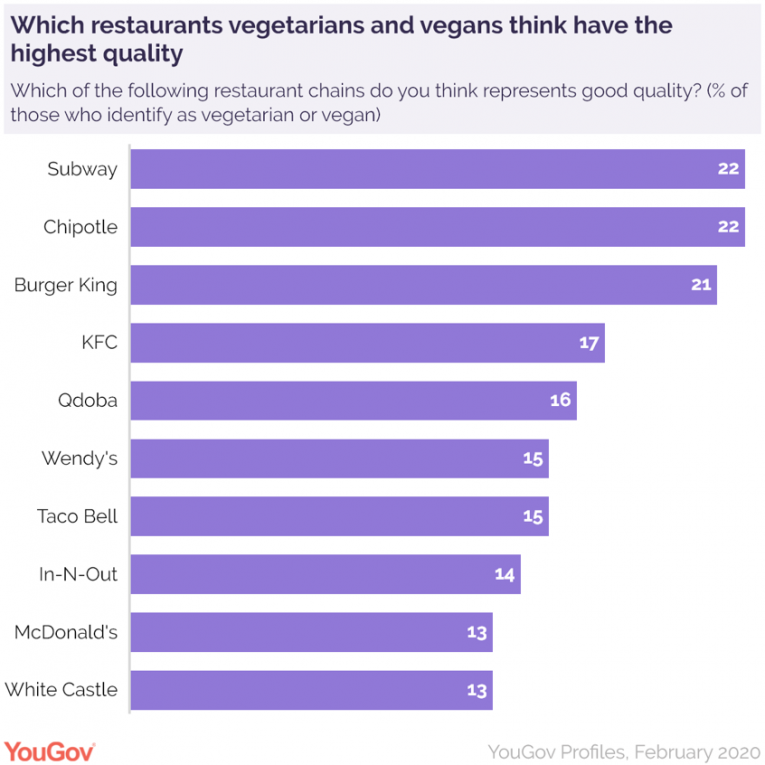 More than one in 10 Americans identify as vegan, vegetarian or pescatarian, according to YouGov data, while 15 percent identify as flexitarian (someone who normally eats a vegetarian diet but occasionally eats meat). That might seem like a small part of the market, but nearly seven in 10 Americans (69 percent) say they make an effort to eat enough fruits and vegetables, so demand is high.

YouGov data shows two in five (40 percent) of Americans are considering reducing their meat and dairy intake while a quarter (25%) sometimes feel guilty when consuming meat and dairy products.

Burger King—which also scores high on our list of restaurants with high quality scores among non-meat-eaters—is leveraging its perception of quality among vegetarians and vegans, offering its Impossible Whopper burger nationwide.

While not known for its depth of vegetarian options, KFC is the latest quick-service brand to dabble in meatless meat, testing Beyond Fried Chicken in tennessee and North Carolina.

McDonald’s has been slower to enter the plant-based protein craze, but it is testing a Beyond Meat burger in a small pocket of Southwestern Ontario in Canada.

While Wendy’s doesn’t offer a faux-meat sandwich, it’s a long-time player in the entree salad game. It re-introducing the entrée salads in 2002 after first rolled out an industry-first salad bar in 1979. 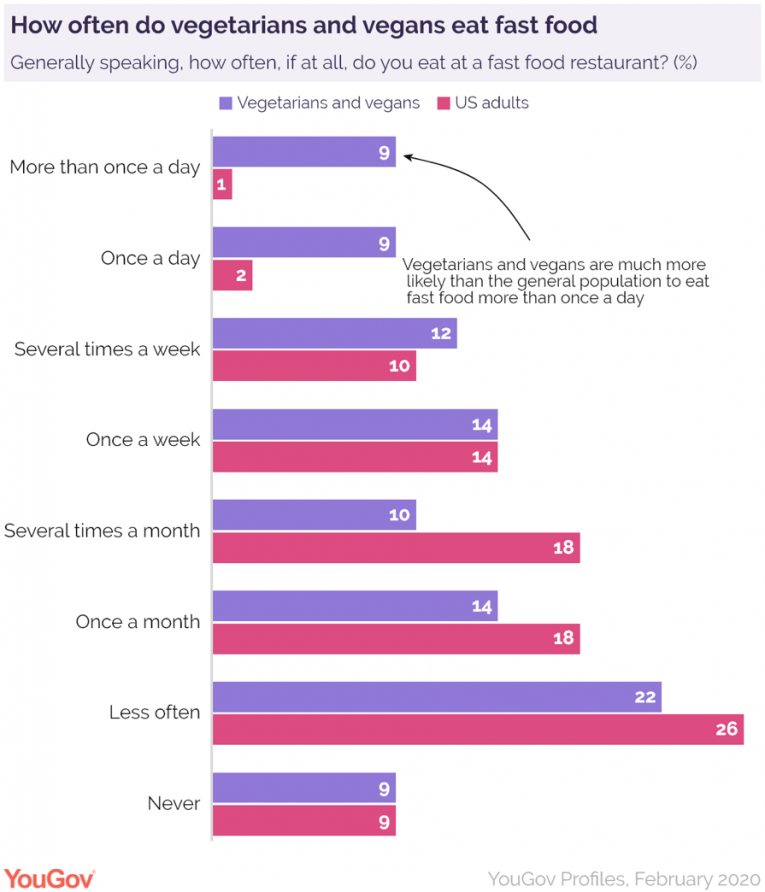 Recent YouGov data shows millennials are more likely than other generations to say that they have changed their diet in order to improve their mental health (30 percent) or reduce their impact on the planet (20 percent).