Cost of labor as a percentage of sales has improved from 33 to 27 percent since 2018.

Outside Insights | June 30, 2022 | Stuart Skorman
The Works Cafe
The Works Café was included in QSR’s most recent 40/40 List of America's hottest fast casuals.

Six years ago, we decided to focus on completely reinventing our company, especially how it was organized and how we could improve the performance of our front-line workers. So, we stopped looking for new locations in order to concentrate on this goal.

We started by studying companies we admired such as In-N-Out Burger, Chick-fil-A, Chipotle, and Shake Shack. Specifically, we wanted to analyze how they were able to pay all their employees more than we did while also generating higher profits. The most important discovery we made, not surprisingly, was that these companies hire and retain the best managers at all levels.

We decided to start our process by replacing our senior management team, two DMs in our case, with more talented, engaged and hands-on leaders. This turned out to be very costly and time-consuming. For the first time in the company’s 28-year history, we retained an expensive but well-connected, restaurant-industry specific, head-hunter who was highly recommended by a very reliable source. We then interviewed about a dozen candidates he presented to us and eventually settled on two we wanted for our team. Unfortunately, we chose wrong because within two years, we had to start this long, expensive process over again. However, we definitely learned from the mistakes we made on this first search.

Before we began our second search, we changed the DM job description to require them to work five days a week in the cafes and we eliminated admin days in an office behind a desk. With a high-quality laptop, they could take their office with them to the cafes. We believed this new, hands-on, DM job framework, was crucial to attracting the best candidates for our needs and helped us better manage our new DMs and their job expectations. We also decided to limit the number of cafes that each DM would be responsible for to four locations so they could spend extra time in the café(s) that needed additional help. For example, locations that were transitioning to new GMs or were training a large number of new employees. In addition, they were now required to visit each location at least once a week, unless they reported a good reason not to.

We eventually chose two candidates who didn’t have the impressive resumes the first two DMs had, but who seemed to be more hands-on, hard-working and talented. In addition, we made sure they were a stronger fit for our community-minded café culture because we learned it was crucial. This time we got it right.

To help our new DMs supervise and sometimes manage the cafes, we installed multiple cameras in all locations. Although we appreciate their value in reducing theft and catching obvious employee misconduct, we primarily use the cameras for management. For instance, they’re invaluable for scheduling. Aside from the obvious costs of over scheduling, we believe too many workers with little to do is unhealthy for our culture. Moreover, bored workers are not happy, especially those who like to work hard (and pretty much every restaurant prefers employees who like to work hard). On the other hand, not scheduling enough workers, leads to employee burnout and slower customer service. The cameras also allow us to give both positive feedback and constructive criticism to individual shift managers and sometimes to entire shifts of workers.

The next step in our turnaround was to gradually replace the majority of our café GMs with higher caliber, more competent, engaged and hands-on managers. The long process of reinventing The Works’ org chart in this way, hiring a stronger management team, was disruptive in many ways, but resulted in improvements that led to many favorable outcomes that triggered other favorable outcomes throughout the organization over the next two years. Thus, we created a powerful virtuous circle.

For example, and this was strategic for us, one of the changes our new DMs made was to turn our POS system around in order to make it easier for customers to leave tips. We soon had evidence that the extra pay this generated helped to attract and retain more engaged workers. We wanted to maximize the positive impact these better paid employees made, so we significantly increased their wages and added bonuses as well. Soon, we had the highest paid fast-casual workers in most, if not all, of the markets we’re located in. 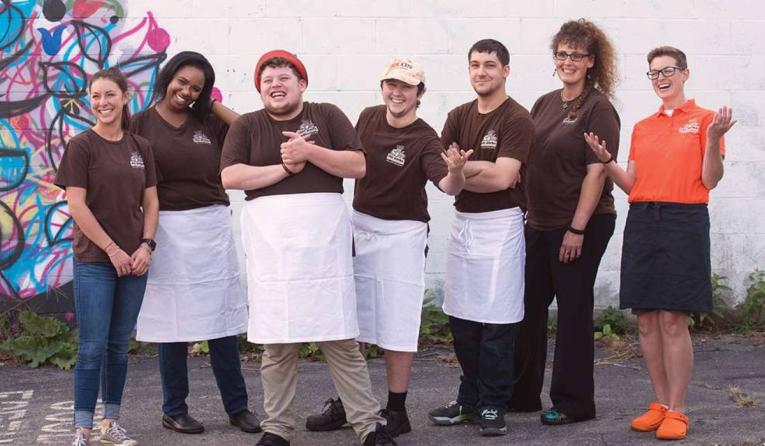 "Well beyond the financial benefits we’ve experienced doing this, we, like most of our employees, are both enjoying working at The Works more than we ever have."

The virtuous circle of well-paid and well-managed employees kept getting stronger. More talented, engaged workers produced more consistent, high-quality food that is delivered faster and with friendlier customer service. In turn, this increased both throughput in general and throughput per employee, resulting in more tips for each employee. We were encouraged enough to further increase wages and bonuses.

The combination of the six benefits listed above helped to reduce cost of labor as a percentage of sales from 33 to 27 percent in four years.

It’s worth mentioning that there are additional reasons our volume and profits have gone up as much as they have because we reinvented our company in more ways than already mentioned. These include remodeling the cafes, adding state-of-the-art technologies and expanding our menu to include healthier foods. But many of these improvements were in place by the end of 2018, so we give our management, and especially the engaged workers they hired, trained and mentored, much of the credit.

We’re not the only restaurants experiencing the virtuous circle effects driven by well-paid, well-managed and engaged workers. In addition to the four well-known companies noted earlier, there are many small chains and indies that are benefiting from virtuous circles similar to ours. While large franchised chains may not be able to consistently generate these results among all their franchisees, some individual franchise groups, even large management groups that operate several different brands, have created invaluable virtuous circles among their workers and managers.

We believe creating and benefiting from this type of virtuous circle (or virtuous cycle of virtuous circles) can be achieved by most restaurants as long as they have the right management. How to get there will vary from company to company, but no one should underestimate the potential cost and time it involves to successfully achieve this. (The status quo often feels less risky compared to the disruption that can be caused by making big changes.)

It’s worth noting, however, that Starbucks, a company we read about almost daily, seems to be in danger of losing the powerful HR virtuous circle the company created. Maybe they set expectations too high among their baristas, or maybe management took their eye off the ball and focused on stock buybacks instead of investing more in their workers. Possibly, a virtuous circle can’t last forever and reinventing most organizations is needed from time to time. After all, everything changes over time including the factors that lead to virtuous circles.

Naturally, there is a limit to the ROI on increasing employee compensation. We don’t know if we’ve reached that point or not yet. But we’d rather pay a little more than we have to, despite the margin compression pressures caused by skyrocketing COGS and energy, in order to maximize this ROI. Well beyond the financial benefits we’ve experienced doing this, we, like most of our employees, are both enjoying working at The Works more than we ever have.

Even though we started our transformation at the top of our org chart, we’ve never forgotten that the most important stakeholders and the heart and soul of our company are the front-line workers.

Stuart Skorman, a serial entrepreneur based in Northern California, has been a strategic adviser to the Works Café for 14 out of the 33 years the company has been in business. The Works Café was included in QSR’s most recent 40/40 List.