How Regions Rate Fast-Food Quality, and Why it Matters

Growth could come down to guest perception.
Outside Insights | January 2020 | Ted Marzilli
Overall, Chick-fil-A has the highest Quality score among Americans, according to BrandIndex data.

Is Arby’s better in Michigan? Are Nathan’s hot dogs snappier in New York? Sort of. When it comes to perception of quality among customers of fast-food restaurants, home-field advantage matters, according to YouGov Profiles data.

Many Americans are more likely to think chains based in their area represent good quality compared to the rest of the U.S. adults. A restaurant’s “Quality” score in BrandIndex, YouGov’s proprietary tool for measuring brand health, is based on responses to the question: “Which of the following restaurant chains do you think represents good quality?”

Take Middle Atlantic, for example: Those living in the region encompassing New York, New Jersey, and Pennsylvania are more likely to think Nathan’s Famous hot dog restaurant is good quality than do the rest of the country. While Nathan’s doesn’t have any restaurants outside the region, the brand’s products are available at grocery stores across the nation. 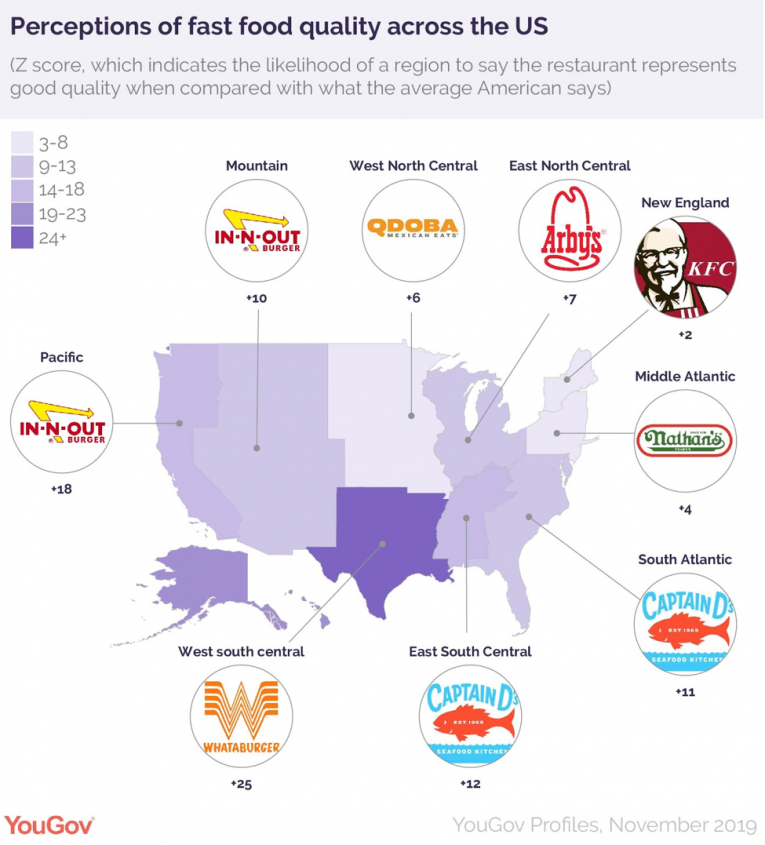 Not every brand wants to expand coast to coast. Take In-N-Out for example.

Some larger national chains buck the home-turf trend. New Englanders are more likely to rate KFC high for quality, while those in East North Central are more likely to give the nod to Atlanta-based Arby’s, which has some 3,300 locations around the globe. Qdoba Mexican Eats, which opened its first location in Denver in 1995, scores highly on Quality scores in the West North Central, next door to Colorado.

A majority stake in Whataburger was sold to BDT Capital Partners this year, a move that could spark expansion into new territory. Tiffany Hagge, managing director of BDT, said in a statement that the company would “pursue accelerated growth in existing and new markets.”

Predictably, California favorite In-N-Out does well in the Pacific region, but also in the Mountain region, an area of expansion for the chain.

In a rare public interview with Forbes in 2018, Lynsi Snyder said the company doesn’t have dreams of spawning locations across the U.S. map. “I don’t see us stretched across the whole U.S. I don’t see us in every state. Take Texas—draw a line up and just stick to the left. That’s in my lifetime,” she said.

Overall, Chick-fil-A has the highest Quality score among Americans, according to BrandIndex data, followed by Subway, Wendy’s, Arby’s, and In-N-Out.

Meanwhile, YouGov Profiles data can show us how regions think differently about food in general. Those in Middle Atlantic and Pacific region are more likely than the rest of the U.S. to believe they don’t have enough time to prepare and cook food. Americans in those regions are also fine with paying more for organic food.

Those in the Mountain region are more likely than the rest of the country to regularly sit down for a family meal. And if Americans in the South Atlantic, West South Central or Pacific regions need a pick-me-up, they’re more likely to reach for tea rather than coffee.

Culver’s is Ready to Share its Wisconsin Roots Across America
The National Restaurant Association Show: It’s Great To Be Back
Wendy's Holds Steady in Face of Historic Inflation