McDonald’s Has the Most Downloaded Fast-Food App in America

The burger chain leads the pack for the third consecutive month. 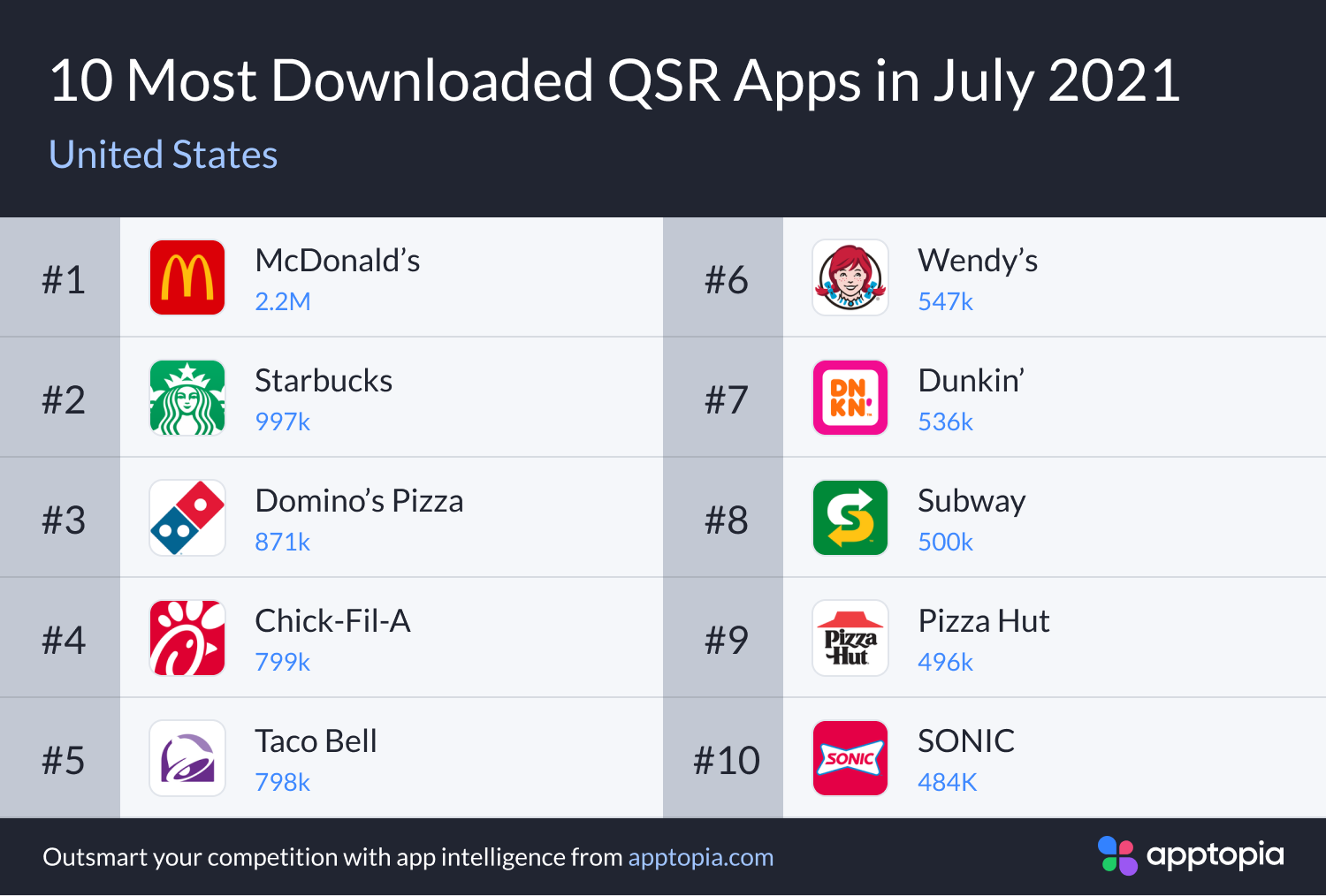 Downloads, or net new installs, of the top 10 quick-service restaurant mobile apps grew 7.2 percent month-over-month. McDonald’s increased downloads by 664,000 from last month. on the back of its new loyalty program, which more than 12 million people have already enrolled in. Growth is continuing into August as the app is estimated to have hit a record three million daily active users in the U.S.

Comparing last month’s ranking with this month’s, there are a lot of similarities. The top three apps remained the same. Wendy’s dropped from No. 4 to No. 6. Chick-fil-A moved up one spot from No. 5 to No. 4, and Taco Bell also moved up one spot from No. 6 to No. 5. The next three—Dunkin’, Subway, and Pizza Hut—are situated the same as the month prior. Sonic Drive-In bumped its way into the 10th spot, robbing Burger King of a placing. Burger King dropped two spots to No. 12, right behind Little Caesars at No. 11.

National French Fry Day was last month. According to National Day Calendar, the holiday takes place every year on July 13. Almost every restaurant that sells fries created some kind of promotion, with many specifically directing people towards their mobile app. McDonald’s and Wendy’s both offered free fries with purchase when ordering via mobile app. The Golden Arches also held a “World Famous Fan” contest where 66 fans had the chance to win one million MyMcDonald’s Rewards points, with one person winning free fries for life. If you didn’t know, free fries for life is apparently worth just under $20,000. Jack in the Box gave away free curly fries with app orders while White Castle gave away a free small fry with any purchase. You get the idea.

We see McDonald’s continue to dominate the digital domain with the biggest boost in new installs from its fry day promotion. I’m sure the chance to win more than free fries played a big role, but we also have to remember that this behemoth has more money than most to allocate towards promotion awareness distribution. What is most interesting to me is that Wendy’s and Burger King did not make it onto this list. While Burger King was only one spot out of making the above chart, Wendy’s was further out. This could be because in late June it ran a frosty and fries promotion on National Drive-Thru Day (who knew?) which resulted in a substantial, 427 oercebt increase in downloads from the same day the week prior.

Before we wrap this month up, two quick notes. The first is on Subway’s Europe app which received its most single day downloads ever on July 12 with 61,000. This came in response to a promotion where the company gave away one million six-inch sandwiches at participating locations. The app only launched one year ago compared to its US counterpart that launched in 2014, so Subway was likely looking for a way to breathe life into its mobile user base.

The next item is on Yum!’s KFC. Amazingly, KFC only recently launched (February 2021) a mobile app in the US even though it had its app live in most other markets for years. Since launch, the app is closing in on one million US downloads and currently stands at 959,000. It is on pace to hit the million-download marker by the time August’s top 10 article rolls around.