The category has held steady throughout the crisis.

Pizza was built for an off-premises boom.

If you’ve flipped open a newspaper or turned on the news in the past few months, you’ve probably gotten the sense that the pandemic has been a catastrophe for restaurants.

From Los Angeles to New York, there is a growing list of restaurants who have had to permanently shutter in the face of the challenges COVID-19 has presented.

These economic casualties are real. But there is another story going on in the restaurant space.

If we look outside of the major metropolitan areas and focus on casual restaurants and chains rather than more upscale independent restaurants there is a much more positive tale. 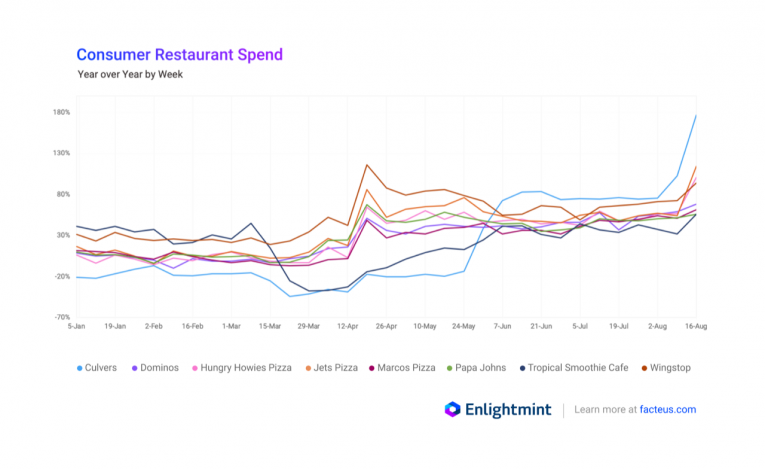 Entering the pandemic, these four categories show relatively flat year-over-year growth of roughly negative 5 to 10 percent. Then in late March, as the effects of the pandemic and the ensuing lockdowns started to fully be felt, quick serve, coffee, and diners all take a year-over-year dive of roughly 20, 45, and 80 percent, respectively.

This is all fairly impressive—but let’s talk about pizza during this period. Unlike the other three categories, when the pandemic and lockdowns kicked in in late March, consumer spend in the pizza category actually held steady rather than experiencing a precipitous drop. It then rose to approximately 55 percent year-over-year growth by mid-April, and maintained that growth trajectory for the next several months, finishing out the week of August 16 with 64 percent year-over-year growth.

The juggernaut that is pizza means that taken together, those four dining categories reach August 16 being up 28 percent year-over-year, which is pretty much a full rebound well beyond where the consumer spend was before the pandemic.

So, who are the specific brands that are helping drive the growth in these categories?

Wings and smoothies and subs all had something to crow about, with various brands experiencing a sharp uptick in consumer spend in the mid-April time period, and then maintaining substantial year-over-year growth for the next several months. For example, Wing Stop saw an eye-popping 120 percent year-over-year growth in mid-April, and then cruised at anywhere from 50–80 percent growth for the next several months.

But really, it’s the strong growth of the large mature pizza chains like Domino’s and Papa John’s that is picking up the slack for the restaurant space and bringing consumer spend back to pre-pandemic levels.

Domino’s has more than 6,000 locations in the U.S., and Papa John’s has more than 3,000 U.S. locations. When establishments of that scale experience 40 percent year-over-year growth for months at a time, it can really move the needle for the sector as a whole.

The success of these pizza purveyors largely rests on the fact that they were already well set up for takeout and delivery, which has been the lifeblood of the restaurant industry since the pandemic reared its ugly head.

Pizza places also tend to have a limited menu, which means they don’t have the same type of food costs that, for example, a trendy new restaurant in Portland or Denver might have, which has allowed them to better weather the challenges of running a business in the time of COVID-19.

The bottom line here is that it’s not all doom and gloom in the restaurant space. While certain segments will continue to struggle, casual dining is on the rebound, and pizza is likely to have a long and prosperous reign.

Randy Koch is CEO of Facteus, a leading provider of actionable insights from financial data.