App downloads spiked as the brand offered rewards members an early in.

The top 10 quick-service restaurant apps in the U.S. were downloaded 10.8 million times in May, 8.9 percent more than those the month prior. Year-over-year in the month of April, downloads of the top 36 quick-serve apps are up 29 percent. A download represents a new user and the first conversion on the mobile app customer’s journey. 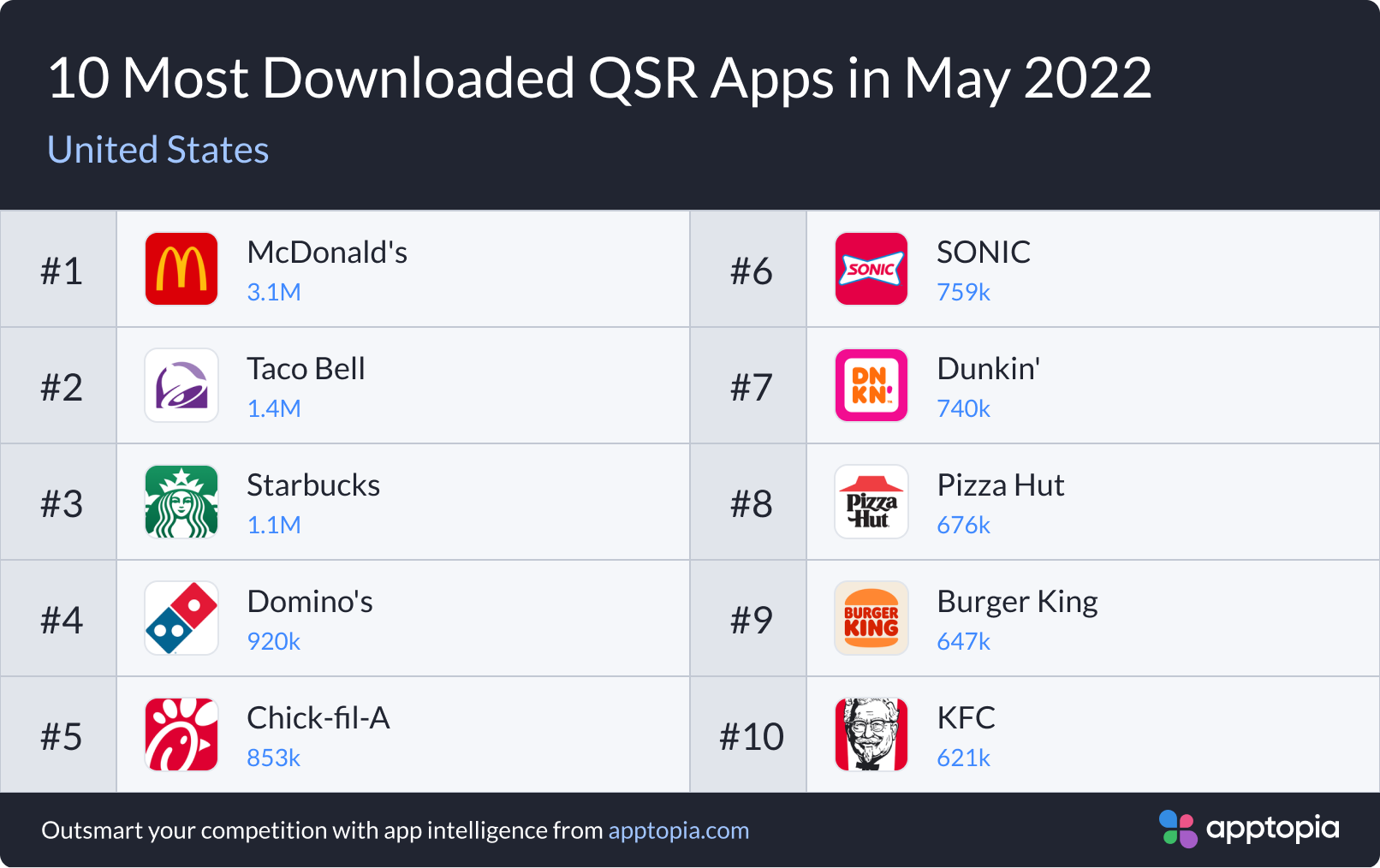 Normally, there are only one or two apps that break the million mark per month but in May there were three; McDonald’s, Taco Bell, and Starbucks. McDonald’s was up over three million for the second month in a row. Taco Bell’s numbers helped it move from the No. 5 spot in April, all the way into second spot in May. Sonic also had a big month, moving from No. 11 to No. 6, while Wendy’s was booted off the top chart in May, dropping from No. 6 to No. 12.

Taco Bell grew month-over-month downloads by 82.1 percent, the most out of any of the top 36 apps. This was a much larger spike in new installs than that from its Taco Lovers subscription offer earlier in the year. Why? Quite simply, it reintroduced its popular Mexican Pizza menu item. Starting on May 17, Taco Bell Rewards members could order the pizza via the app. Non-rewards members had to wait two days before they could get their hands on one.

As mentioned, Sonic was also a big mover in the top chart, achieving a month-over-month downloads increase of 38.4 percent. In late April, Sonic launched its Teacher Appreciation Day campaign. The chain was offering a free cheeseburger with purchase to all enrolled in the Sonic Teachers’ Circle, a free rewards program exclusively for educators available through the Sonic app. It also matched up to $1.5 million in donations to DonorsChoose, a national nonprofit that allows individuals to donate directly to public school classroom requests submitted by teachers.

Campaigns offering freebies for app signups, like the one Sonic engaged in, are great because while they would benefit from targeted mobile advertising, they do not rely on it. Quick-service restaurant brands looking to drive new mobile app users have likely found that targeted mobile advertising has become more difficult on Apple devices. For these types of campaigns, brand power and media relations efforts help get the word out, and free food is a strong incentive for action.

Another creative example of generating app users comes from Chick-fil-A. Earlier this year, the company created partnerships with several sports teams to offer fans a free chicken sandwich promotion following a game win. The freebie only lasted for 12–24 hours after the win and had to be ordered via mobile with location services turned on, to limit the giveaway to local fans. By aligning with the brand affinity popular teams (that also happened to win a lot), it acquired many fans of Alabama and Auburn football and the NHL's Carolina Hurricanes and Tampa Bay Lightning. 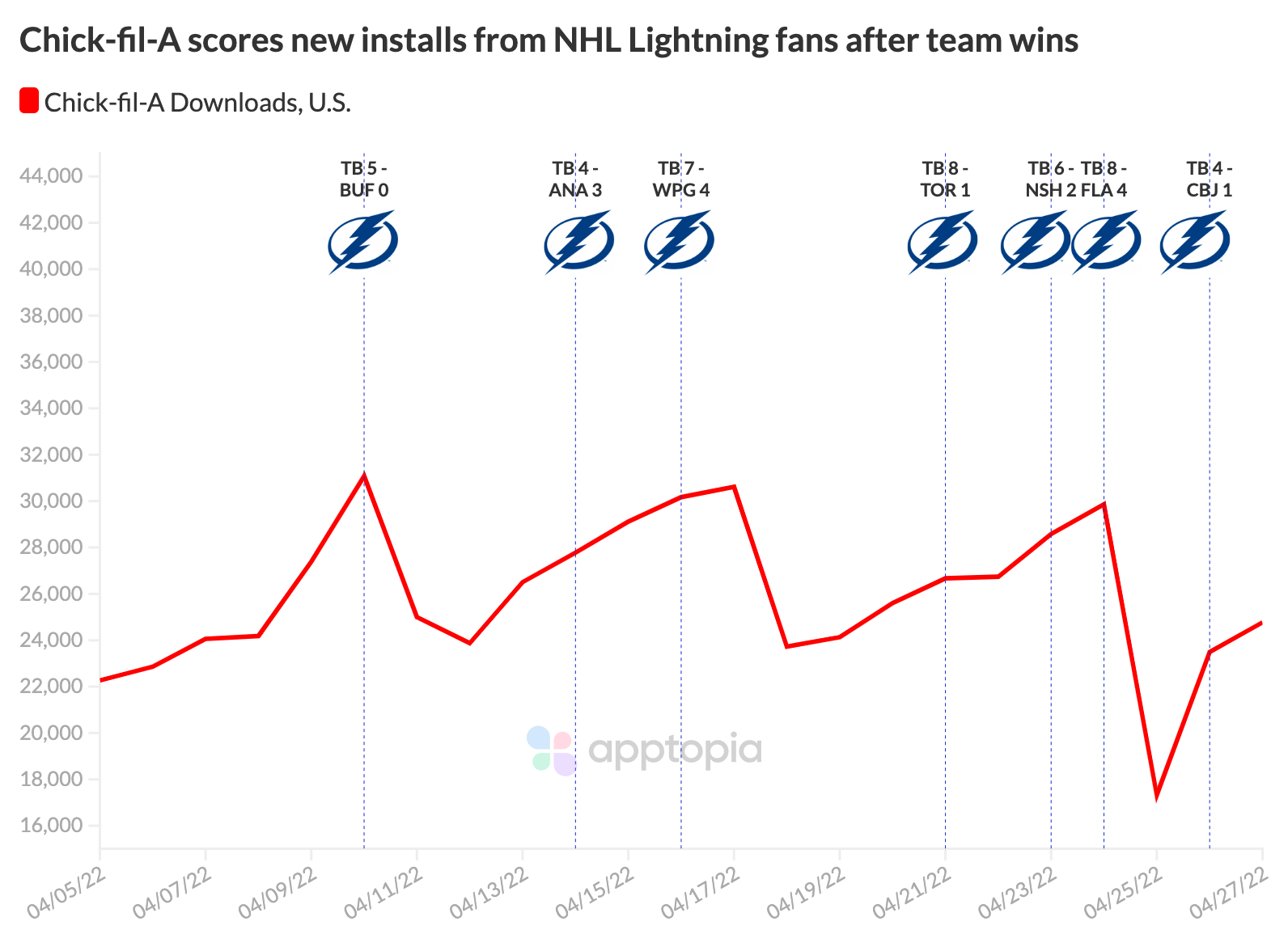 One last fun thing that took place last month was the collaboration between Netflix and Domino’s with regard to the launch of Stranger Things season 4. The pizza chain launched a separate app which required users to have a registered account to order pizzas with their mind. Since launch the app has been installed by more than 167,000 people. It’s hard to say what percentage of these users already had a Domino’s Pizza Profile account versus those who needed to create one.