The Delivery Battleground Heats Up at Domino’s

Competition is coming in from all sides.
Pizza | July 2019 | Danny Klein

Domino's continues to invest in industry-leading delivery technology. When the third-party dust settles, will it give the pizza chain an edge?

There are two narratives unraveling at Domino’s. The pizza chain is being squeezed by third-party delivery pressure, leading, in part, to its slowest U.S. same-store sales performance in seven years. Its 3 percent growth in the second quarter of fiscal 2019, announced this week, also marked the fifth consecutive slowdown since the brand posted 8 percent higher comps in early 2018.

It would be accurate to say Domino’s is a victim of its own success. After all, few chains would scoff at 33 consecutive quarters of U.S. gains and 102 internationally. And the 3 percent figure lapped a prior-year increase of 6.9 percent, which paints an impressive two-year stack few brands could rival, especially in this space. Pizza Hut was flat in its previous quarter, while Papa John’s has been mired in mid- to high-single digit declines for some time.

As BTIG analyst Peter Saleh put it in his July 17 letter, “we believe the stock’s decline is more a function of elevated expectations rather than inflated valuation.”

That’s probably the most accurate way to put it. Domino’s is measuring against its own bar, and that can be a tough audience to satisfy, although its enviable.

But as far as the trends at hand go, Domino’s is fighting on multiple fronts. And the new battle isn’t just with the DoorDash, Grubhub, and Uber Eats of the world, it’s the heavy marketing, promotions, and incentives that go along with it. Third party is still an upstart collection of companies jostling for share of voice. That includes, most vividly, clawing for supremacy against each other. Domino’s is competing, too, but without the rampant investor dollars being poured into aggregators.

However, CEO Ritch Allison said during Tuesday’s conference call, Domino’s is willing to weather these pressures to play the “long-game journey.” Due to competition, third-party vendors don’t have that luxury.

This rush of deals from aggregators to increase awareness has brought up a host of questions, Allison said. While third-party vendors have proven increasingly effective at creating trial with offers, is it sustainable?

“There still remains a heavy degree of discounting in the marketplace by the third-party aggregators,” Allison said, “and, also, a heavy degree of advertising spend as well. That group of aggregators has taken a fairly significant share of voice out there in terms of the advertising landscape around food delivery. We expect that behavior to continue for some period of time.”

He continued, despite the reality economics of third-party business remain murky, “the near-term activity certainly indicates that investors are very willing to lose a lot of money in the near term to try to drive trial and market share in those businesses.” 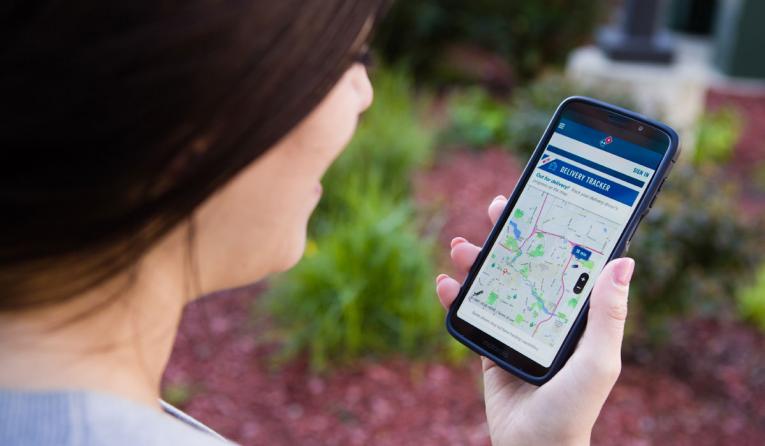 Domino's GPS tracking technology is expanding systemwide by the end of 2019.

The simple truth is an uncharted challenge. One example: Historically, the biggest transaction driver for Domino’s is value. Customers can get a pizza for the same price as they did a decade ago. So does the rise of third-party delivery, which tends to trade higher prices for convenience, with users typically taking on the fees, give pizza chains pricing power?

Allison said it’s too early to tell what impact aggregators are having on setting pricing in the pizza marketplace. “There's been so much discounting that even though some of the stated fees for food delivery are quite high relative to the underlying cost of the product. You probably get the same push notifications I get all of the time in emails from these aggregators with significant discounting to try to entice orders,” Allison said.

Regardless, he added, Domino’s experience shows that remaining focused on value ($5.99 Mix & Match and $7.99 carry out) is the key to generating long-term transaction growth in this sector. That won’t ever change. Third-party delivery, on the other hand? Allison isn’t so sure it has staying power as it stands today.

What this suggests is a shift in how consumers receive their food—more delivery, less dine-in and take-out—but no true indication of overall growth in demand.

“We also still continue to believe that ultimately this is extracting profitability out of the restaurant industry for those players that are going on to these third-party platforms,” Allison said. “Now, for the brands that are going on, you can take a look at top line sales growth, which will contribute royalties to brands, but I think the ultimate question about the viability will lie with the franchisees of those brands and are they in fact making more or less money because they've gone onboard with these platforms.”

Another way to look at this isn’t how long third-party delivery will be viable, or if it will consolidate or morph into something else. For Domino’s, the near-term pressure isn’t driven solely by the presence of the added competition—it comes from the significant amount of investor subsidy allowing aggregators to keep up the discounting and marketing pace. “And when you think about it,” Allison said, “while the behavior at first watch may seem irrational, it is actually quite the rational behavior on their part. There are going to be some survivors in this business and some of these aggregators will not be around in the future. [That] would be my hypothesis.”

"We not only have to be the most economical and lowest-cost delivery providers, but we’ve also got to be the best at getting to the door on time every time. And so we've got a pretty aggressive push internally to take service to the next level." — Ritch Allison, Domino's CEO.

Essentially, competition among third-party vendors is the reason the pressure gauge is so high for Domino’s and other self-delivery restaurants. Spending on advertising and trial deals is a short-term necessity aggregators require to climb a mountain that doesn’t exist yet. When the winners ultimately emerge, this entire conversation will change. And Domino’s, for its part, will remain in a position of strength, Allison said. Why? Because the brand didn’t panic when the pot boiled and chase another delivery company’s core equities. And, also, it invested in technology that goes beyond just getting food to customers’ doors.

In late April, Domino’s piloted GPS driver tracking at 27 corporate stores throughout Phoenix. The technology lets customers track the location of their order and driver via a map from the order confirmation page of Domino’s website or app. Guests can also receive an estimated delivery time and opt into SMS notifications that tell them when the order is about 2 minutes away.

This service benefits delivery drivers, too, Domino’s said, because it offers optional navigation and one-touch customer callback capabilities. Store managers, meanwhile, have a driver-tracking screen at the restaurant that shows where all of the drivers are out on the road, allowing them to better manager operations and focus on efficient deliveries.

Allison said Tuesday the platform is headed systemwide by the end of 2019.

This past quarter, Domino’s unveiled self-driving vehicles with Nuro. The custom, unmanned vehicles, known as R2, are also an opt-in feature for customers who receive a unique PIN code to unlock the compartment and grab their pizza. This is set for a fall test in Houston.

“We continue to develop fantastic technologies to put into the hands of our customers and into our stores to better drive operations,” Allison said. “And we are pushing, I think, very importantly, very hard on service within our system because a critical element as we look forward into this new world where you can get anything delivered.”

Once more, it’s a strength Domino’s can wedge between itself and third-party vendors.

“Well,” Allison added, “we not only have to be the most economical and lowest-cost delivery providers, but we’ve also got to be the best at getting to the door on time every time. And so we've got a pretty aggressive push internally to take service to the next level.” 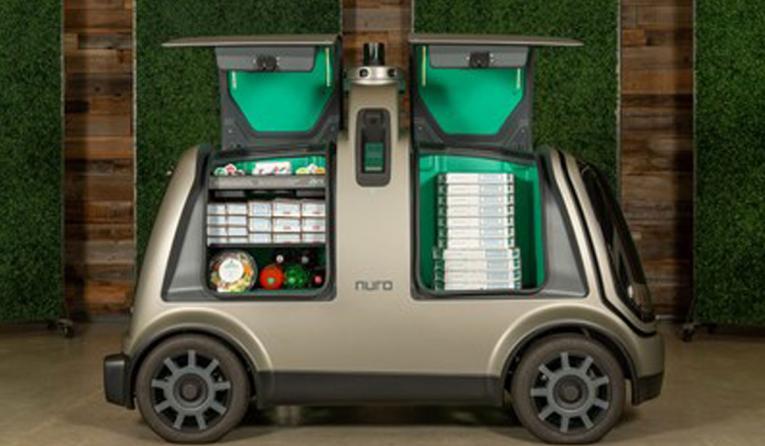 Self-driving pizza delivery cars? Domino's is testing that, too.

The fight for drivers

Allison was asked if the added competition affects Domino’s fleet of drivers. The short answer is yes. So does record low levels of unemployment and the flood of grocer and at-home options.

Firstly, scheduling and staffing is critical, Allison said. Domino’s has worked on store scheduling algorithms to make sure employees are on the clock at the right times, on the right days.

Allison then mentioned an interesting opportunity. Currently, nearly all of the pizzas that go out in the U.S. market are delivered by passenger automobile. That’s not the case around the world.

Domino’s is looking at alternative delivery methods stateside. In a number of cities, the chain is now delivering on bicycles. It also has some e-bikes in select markets, including corporate locations. “Now, the interesting thing about those is not only is it a lower cost way to deliver food, but also it opens up some additional workforce to us because not everyone has an automobile and increasingly young people, that kind of 18-year-old to 20-year-old range, fewer of them seem to have cars,” Allison said.

The other long-term reality

Domino’s financial success is one culprit. The other is its fortressing strategy. Domino’s sold 59 corporate New York stores recently to accelerate the strategy.

Allison said fortressing puts downward pressure on same-store sales in the short-term. “As we've discussed in the past, this is an investment that we and our franchisees are happy to make for the long-term growth and profitability of the business,” he said.

It also creates opportunity for operators to grow their enterprise profitability. And, in the end, it will foster an even stronger delivery proposition for competitors—from all angles—to compete with.

21 Main Street, Suite 204
Hackensack
NJ
203-883-6060
SH Franchise Finance is an independent finance company, so we know what it is like (more)
Kiosks/Self Service