Domino's Punches Back Against Third-Party Delivery

Domino's continues to grow in the U.S., with top-line gains and solid unit count momentum.

Domino’s opened the glass-paneled, new doors of its “Innovation Garage” to investors September 6 in Ann Arbor, Michigan. It provided a chance to showcase some of the brand’s tech-centric innovations, platforms, and products it believes will help the chain weather an unprecedented storm in the pizza segment.

In recent quarters, especially the last two, Domino’s hasn’t been shy about the near-term headwinds its facing from delivery aggregators, and where it stands on the movement. Chief executive Ritch Allison didn’t mince words, saying the company believes third-party delivery ultimately “is extracting profitability out of the restaurant industry for those players” signing up. The 1,000-foot view of this, Allison said, is that restaurant chains can look at top-line sales growth, which contributes royalties to brands, and see one picture. But the other side, in terms of viability, is whether or not franchisees are, in fact, making more on less money. One analyst, Dylan Bolden, a senior partner at Boston Consulting Group, said operators need to generate at least 25–30 percent of their orders from delivery for the labor economics to make sense.

From where Domino’s stands, Allison said, the industry hasn’t seen a significant change in growth rate, in terms of transactions and overall sales, despite the rapid entry of delivery aggregators. There’s been a shift in how consumers access food—more delivery, slower dine-in traffic—but no true indication of overall growth in demand.

With all of this in mind, not to mention the more present fears (quality, control, data, etc.), Domino’s continues to resist the pull, even as fellow category giants Papa John’s and Pizza Hut tap into third-party reach.

Allison said in July Domino’s was playing the “long-game” journey, something delivery vendors couldn’t afford to. “There still remains a heavy degree of discounting in the marketplace by the third-party aggregators,” Allison said, “and, also, a heavy degree of advertising spend as well. That group of aggregators has taken a fairly significant share of voice out there in terms of the advertising landscape around food delivery. We expect that behavior to continue for some period of time.”

But not forever. “… the near-term activity certainly indicates that investors are very willing to lose a lot of money in the near term to try to drive trial and market share in those businesses,” he added.

In other terms, Domino’s sees immediate pressure ratcheting up thanks to investor subsidy enabling aggregators to pulse discounts and trial deals at a rate no reasonable chain could, at least not profitability. Yet the major difference, and why the strategy isn’t as irrational as it first appears, is that these aggregators are fighting for survival, not just share. “… some of these aggregators will not be around in the future. [That] would be my hypothesis,” Allison said.

Domino’s isn’t just sitting back, however. 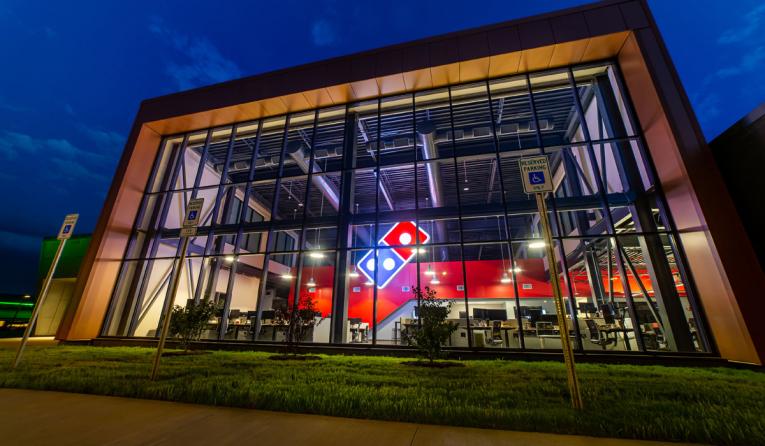 Domino’s is launching a 20 percent off promotion after 9 p.m. The deal specifically targets the post-dinner/late-night daypart where quick-serves generate a sizable amount of delivery sales, “and that Domino’s admittedly hasn’t captured as effectively and they would like,” Saleh wrote in a Monday note. It reached Domino’s digital marketing channels to start the week.

The brand also spoke about its autonomous vehicles with Nuro and e-bikes created by Rad Power Bikes. Saleh wrote the first presents a cheaper model for guests (no tip) but is also more burdensome as it often requires coming to the curb to retrieve food. That, to some degree, limits the bad-weather lure of delivery. The custom, unmanned vehicles, known as R2, are an opt-in feature for guests who receive a unique PIN code to unlock the compartment and grab their pizza. They’re set for a fall test in Houston.

E-bikes enjoy materially lower insurance and delivery costs and provide a wider pool of employees by not requiring car ownership. Domino’s announced in August it was bringing the e-bike platform national after tests in Houston, Miami, and New York.

Curtis added that stores already delivering with traditional bikes witnessed improved employee satisfaction thanks to e-bikes. “Hundreds” of them are planned to roll out across company units throughout Miami, Salt Lake City, Baltimore, and Houston later this year.

Unlike regular bikes, these have small, integrated motors and can run 25–40 miles depending on the user before needing a recharge. Importantly, Domino’s custom built models to include front and rear insulated soft-sided cargo areas to hold Heatwave bags, drinks, sides, and dipping cups. A single e-bike can carry up to 12 large pizzas and hit a top assisted speed of 20 mph.

Additionally, Domino’s GPS tracking is expected to launch systemwide by the end of 2019—an innovation Allison said would “bring even further transparency to the experience of tracking an order.” It also helps operators manage efficiency around delivery operations better. 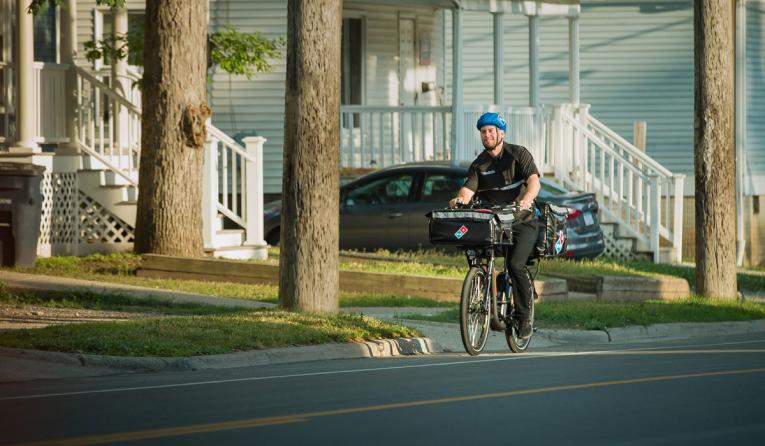 Domino's e-bikes can hold up to 12 large pizzas.

On the efficiency note …

The chain said it’s working internally on store scheduling algorithms to make sure drivers are on the books at the right times on the proper days. Basically, to ensure Domino’s is properly staffing peak times and managing shoulder hours in between busy times.

Aside from delivery initiatives, Domino’s provided some other metrics it noted as category differentiators during its earlier investor presentation.

Throughout quick service, much of the category is growing through ticket as opposed to traffic. According to The NPD Group, year-end September 2018 experience 3.4 percent growth in the segment. It broke down as 0.8 percent traffic, 2.6 percent ticket. That’s a pretty reflective track of recent results. You have to go back five years to find a calendar where traffic outpaced ticket.

Meanwhile, Domino’s growth, the company said, has arrived primarily through orders—a sharp contrast. As seen below. 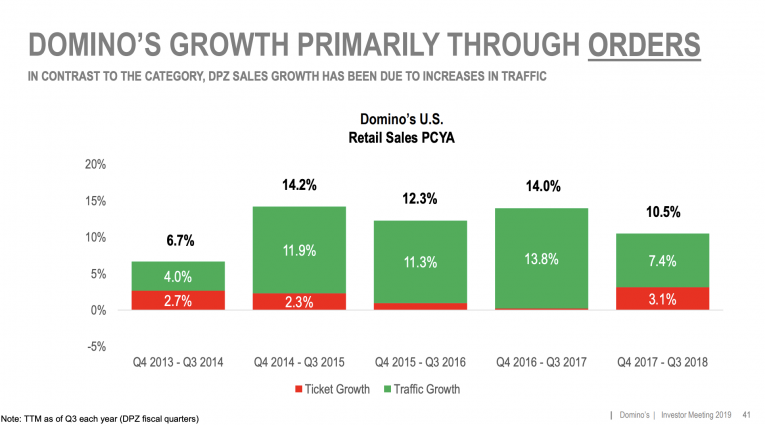 Domino's growth has been healthy in recent years.

Saleh said in a July 17 letter, “we believe the stock’s decline is more a function of elevated expectations rather than inflated valuation.”

Essentially, Domino’s is measuring against its own lofty bar.

Also, the brand’s fortressing growth strategy continues to put downward pressure on comps. But like the delivery outlook, it’s a short-term hit for a lasting effect. Win the long game by establishing closer proximity to households, aiding carry-out business. It shrinks delivery areas, which leads to better service and lower cost per delivery for franchisees. Operators can grow their enterprise profitability and create a strong delivery proposition as well, Domino’s said.

Another key point: it defends against aggregators and drives/keeps competition out.

Domino’s said it plans to increase store count in Las Vegas by 25 percent during a three-year period—all realignments—up from 27 in 2016 to at least 34 by year’s end.