New pizzas are coming at the specialty price point.

Papa John’s continues to get battered by gloomy consumer sentiment and creative and value offerings that struggle to resonate in today’s heightened competitive environment. The brand reported its first annual sales decline since 2009 Tuesday afternoon, with figures dropping 12 percent to $1.57 billion. Papa John’s reported a fourth-quarter loss of $13.8 million, although it ended the year with a small profit. It recorded net income of $4.6 million when adjusted to take out one-time costs, down from $23 million in the prior year.

In addition, the company tallied up $50.7 million in charges for 2018 as it battled controversy and tried to slow domestic closings, including $15.4 million in financial assistance to franchisees; $19.5 million in legal and advisory costs; and $10 million in marketing contributions.

Papa John’s closed 186 North America franchises and seven corporate stores, shuttering a total of 193 units while opening 89. It acquired another 62 as well to end the year with 3,337 North America restaurants (2,692 franchised and 645 corporate). There are 1,966 international locations.

Given the public battle Papa John’s waged with founder and former CEO John Schnatter over the past year, and the plummets that followed, 2018’s sour results weren’t surprising. CEO Steve Ritchie said Tuesday afternoon, despite the difficulties, the company remains confident in Papa John’s long-term potential and ability to correct course.

Here's how fiscal 2018 played out in regards to North America same-store sales, quarter by quarter:

In addition to the steady issues, the pizza chain also took a short-term sales hit this past quarter from conversions to its new loyalty program. Comps fell 10.5 percent in January due to the changes, which dragged average check. Papa John’s layered on extensive value with a 2 medium promotion at $6 each, as well as a free cheesestick promotion that came with signing up for the platform. Trying to have parity value coupled with loyalty, stacked on the free deal, drove extensive pressure, Ritchie said. But same-store sales improved notably in February.

This turnaround effort in 2019 is going to be a lot more complex then just waiting for a loyalty change to run its course, however. Papa John’s projects break-even to 50 cents a share profit this coming year, with comp sales in North America declining 1–5 percent on top of 2018’s difficult run. 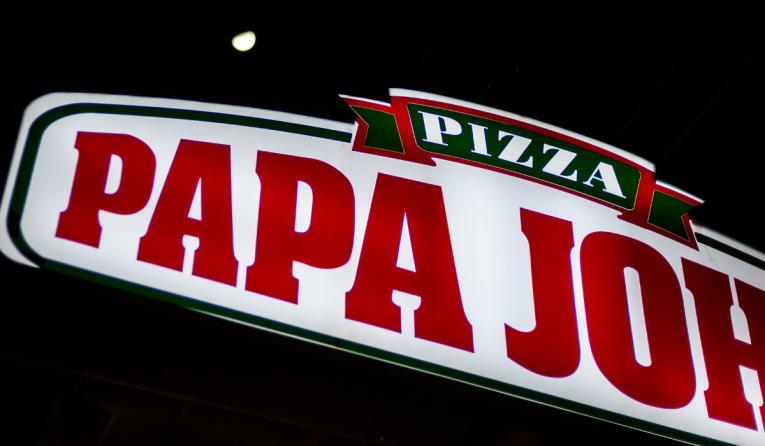 A confidence booster arrived late January in the form of a $200 million investment from Starboard Value LP. About half of that is going back into the business, Papa John’s said. The company added two members to the chain’s board, Starboard’s CEO Jeffrey Smith, who is also taking on the role of chairman at Papa John’s, and Anthony Sanfilippo, the former chairman and CEO of Pinnacle Entertainment.

Starboard engineered one of the industry’s biggest comeback stories when it staged a rare shareholder coup of casual-dining company Darden’s board in 2014. It pushed for operational changes and, within 18 months, the company saw its stock lift 47 percent. Smith served as chairman of Darden’s board until April 2016. Olive Garden, by the way, progressed from negative same-store sales to positive comps growth every quarter after Smith joined. It’s currently riding a 17-period streak of gains.

Ritchie said Smith has “been actively engaged as our new chairman as we evaluate and adjust our plans and strategies for 2019. He is also helping us stay focused on the value drivers of Papa John's, namely quality pizza and building strong consumer connections.”

Papa John’s plans to launch a new advertising campaign in March that joins six new permanent specialty pizzas. Ritchie said it’s the most extensive product launch Papa John’s has ever tried in terms of number of pizzas. They are: the Ultimate Pepperoni, Meatball Pepperoni, Philly Cheesesteak, Fiery Buffalo Chicken, Zesty Italian Trio, and the Super Hawaiian. A hot and honey chicken and waffle pizza, which won Papa John’s specialty pizza contest, is coming later in the year as well.

Although Papa John’s has not settled on a specific value proposition, it’s currently finding success with a tiered structure that focuses on $6 value price points and $12 specialty pies. Sandwiches have been in pilots, too. BTIG analyst Peter Saleh wrote in a note Wednesday that Papa John’s could benefit from a consistent value proposition to compete with Pizza Hut’s $5 Lineup and Domino’s long-running $5.99 Mix and Match platform.

Ritchie admitted that creating accessible value has been an issue for Papa John’s. The relaunch of Papa Rewards in late Q4 was an important step, he said, because “of the value and variety it provides our customers, and the consumer insights we gain.”

Importantly, it provides Papa John’s data to engage with consumers in one-to-one marketing and to market by segment. This, down the line, will drive traffic without relying on blanket discounts across all channels, Ritchie said.

One recent example was a rewards-only promotion that offered free pizza to members who spent $20 during Super Bowl week. “These targeted offerings and other exclusive perks that are tailored to the customer also build brand loyalty,” he said.

Marketing now can go through Papa John’s individual proprietary channels as opposed to the traditional top-of-the-funnel approach. Papa John’s also stepped up its national marketing fund contribution rate from 4.5 percent in 2018 to 4.75 percent on January 1 as it looks to push these various messages.

“We hear from our customers the perception sometimes that maybe Papa John's has been priced too high in the past relative to the overall experience that they receiv. So as we lean in on better pizzas, we really lean in on the operating experience and the customer experience.” — Mike Nettles, Papa John's COO.

Everyday value offerings have been lacking for Papa John’s in the past. Ritchie said that’s changing. In Q4, the brand tested a few different offerings in select markets, including pushing carryout deals in areas where business is heavily weighted across that channel.

The $6 and $12 structure also returned some promising results, COO Mike Nettles said. One reason being it’s two very clear price messages from a brand that has often relied on differentiated ingredient promotions. “We hear from our customers the perception sometimes that maybe Papa John's has been priced too high in the past relative to the overall experience that they receive,” Nettles said. “So as we lean in on better pizzas, we really lean in on the operating experience and the customer experience.” It’s also going to lean on an accessible value construct where value-seekers can come in and get a pizza for $6. If they still want a premium product that’s not offered elsewhere, they can tap the $12 mark for one of Papa John’s new specialty offerings.

The chain led the $6 tier with two medium, one-topping pizzas for $6 each. Next, it was a carry-out special (also a medium, one-topping pizza for $6). Moving forward, Papa John’s can flex other items, not necessarily pizza, into the construct as it tests what resonates and what doesn’t. Regardless, the price point hit home. “Specifically, new customer acceptance are actually being targeted in such a way that we're driving new customers to the brand. And it's working out very well for us,” Nettles said.

On the $12 side, Papa John’s ran a Philly Cheesesteak deal that evolved into an any premium offering that now leads into the six fresh offerings.

“Customers see it as not only accessible but, as you can imagine, it actually drives a nice check for us as well. So we're happy with that as a starting point, but we're going to continue innovating on both of those things to really make sure that it's not just a better pizza, it's an overall better pizza experience,” Nettles said.

There are a lot of internal issues being addressed in Papa John’s system. Over the past few months, the company shined a light on culture. It engaged outside experts to conduct a cultural audit and provide recommendations on actions Papa John’s needed to take to “ensure our commitment to diversity, equality, and inclusion,” Ritchie said.

One change was diversity, equality, and inclusion training for all corporate office employees. Ritchie said there was nearly 100 participation rate for the 7-hour workshop and it’s now being rolled out to Papa John’s field team. The program is available for franchisees at no cost as well.

“This is a first-of-its-kind benefit in the quick service restaurant industry and one, we believe, will help improve employee retention, especially at the restaurant level, and will differentiate Papa John's as employer of choice in the competitive employment environment,” Ritchie said.

From a marketing perspective, Ritchie said, Papa John’s previous creative underplayed its ingredient-driven approach with a focus on limited-time products, loyalty, and promotions. As a result, Papa John’s has not broken through the significant marketing dollars that its competitors are spending, he added.

In March, Papa John’s will launch TV and digital campaigns that “show Papa John's leaning into the story of our products and ingredients and doing it in a way that is relevant to millennial and Gen Z consumers. We want to ensure the new generation of pizza consumers understand the quality foundation of our brand so that we can attract new customers,” Ritchie said.

Mobile channels now represent about three quarters of digital sales at Papa John’s. The brand deployed mobile-first design improvements and intelligent chat technology to leverage the movement. It also integrated Apple Pay and Google Pay on its mobile app and made a number of enhancements to simplify the user experience.

Additionally, ordering is now available on Apple TV, Amazon Alexa, and through DoorDash, which currently serves more than 1,300 restaurants and will increase further in the coming months.