Engaging NBA legend and TV analyst Shaquille O’Neal was a Shaq-sized coup for Papa John’s. When the pizza chain announced his board placement in March, chief executive Steve Ritchie said, organizational decision makers cheered. It was a jolt of positivity the struggling brand sorely needed.

There are a few layers to the partnership, including Shaq’s investment in nine Atlanta locations—one of which features design elements picked by the 7-foot-1 Hall of Famer. The store has his signature on the front of the building and size 22 footprints at the front door. There’s even a custom “444-SHAQ” phone number for the 990 State Street NW location on Georgia Tech’s main campus, situated near the TNT Studios where Shaq films “Inside the NBA.”

Papa John’s owns about 70 percent of the joint venture. Shaq invested roughly $840,000 for the restaurants’ acquisitions costs of $2.8 million, according to a securities filing.

As Ritchie mentioned earlier in the year, the ground-level impact is pretty clear. Shaq, who owns an Atlanta Krispy Kreme, the Las Vegas fast casual Big Chicken, a fine-dining spot in LA, and once ran 27 Five Guys franchises, will drive traffic to the nine locations through his own branding. The Shaq-centric spot in particular. Broadly, it could ignite outside interest to garner additional franchisees into the system, Ritchie said.

But the perks of this specific nine-unit deal, while welcome to a chain that swung a first-quarter net lost of $3.8 million, is perhaps the less visible benefit of Shaq’s arrival. That would be the marketing agreement the parties alluded to throughout the process.

In a securities filing Monday, Papa John’s disclosed details of the deal. It’s an important piece to the chain’s hopeful comeback given many of its problems are image related. At least that’s the narrative Ritchie has suggested. And it’s a hard point to counter. While there are surely a handful of internal and external factors at play, there’s no denying the inflection point (two points, really) where this sales picture derailed.

Here’s a look at the same-store sales trends:

The November conference call where founder John Schnatter made his NFL comments, essentially crediting declining sales to the league’s handling of anthem protests, occurred in Q3 2017. Ritchie previously said the company was 1.1 percent positive and saw a sharp decline after. Schnatter, who has been selling shares at a rapid clip, exited as chairman that July in the wake of an in-house call where he allegedly made a racial slur. He’s admitted to the comment but said it was taken out of context. Either way, Ritchie said, comps declined 6.1 percent before the headline-grabbing incident. After news hit, Papa John’s saw another precipitous drop of roughly 4 percent, according to Ritchie.

Beyond just the PR dent, Papa John’s provided $4.9 million to short-term royalty reductions to franchisees in an effort to ease the slump. This resulted in North America franchise royalty fees dropping $7.3 million, year-over-year. The company also forked up $5.1 million in legal and advisory fees, some of which went to fight Schnatter’s lawsuits as well as the strategic review process the ended with a $200 million investment (which because $250 million later) from Starboard Value LP. 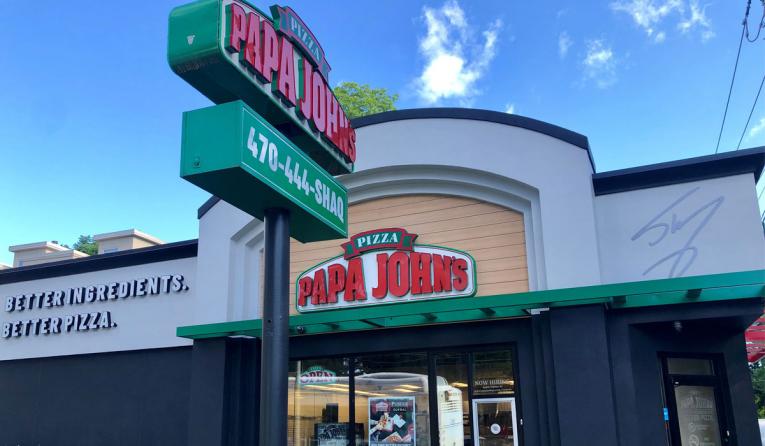 A Shaq-centric location in Atlanta should be a hit.

What’s the cost, and what’s the result?

Clearly, getting Shaq in tow was an important move for Papa John’s marketing department. And here’s how it’s going to play out, per the Monday filing.

Papa John’s was trading for about $51 Monday, which brings the current vale of the shares up to $4.4 million or so. Of course that could change dramatically over time for a variety of reasons.

In total, though, Shaq’s contract is running roughly $8.5 million as it stands today.

The filing revealed some other details as well:

One or more co-branded products will be coming.

Per the agreement, Shaq will make at least eight “service days.” This includes, but is not limited two, production days (up to four, eight hours each) with Papa John’s creative agency.

Shaq will spend, at least, one day engaging with franchisees and employees at company-wide events; one day visiting Papa John’s stores (data and locations to be agreed up); and one day at a community event.

Papa John’s expects Shaq to get social, too. He’s required to post to his Instagram, Twitter, and Facebook page at least once per month promoting Papa John’s products. Papa John’s will create the posts and Shaq’s team will approve.

For the affiliation announcement between Shaq and Papa John’s, Shaq will provide business and consumer PR interviews, including two broadcast TV and three print or online media interviews in New York City; two approved photos for release (one at a Papa John’s restaurant and one making pizza with Ritchie); a social media post; quote for press release; business headshot; and business bio.

Throughout the agreement, Shaq will be made available for 60 total minutes of interview time promoting Papa John’s. He will be trained ahead of time for each talk.

As for the co-branded products, the filing said the parties would “collaborate in good faith” to develop one or more.

Naturally, all of this could evolve over time. And being on the board, as well as an investor, means Shaq is working toward his own interests. Ritchie said Papa John’s saw consumer sentiment improve directly after the initial announcement. Additionally, it was “unanimously supported” by the National Marketing Fund board that’s made up of Papa John’s franchise partners and corporate employees.

Can Shaq’s personality get Papa John’s back on the path to profitability, back to a company that experienced 14 consecutive years of flat to positive sales growth?

Only time will tell, but this appears to be a super-sized start.